In nearly every Senate election going back 40 years, there’s been at least one jaw-dropping outcome on Election Day — the election of a candidate few saw winning until the closing days of the campaign, if even then. So the question in this year’s Senate races may not be if there is a shock, but rather, where it happens.

Chart 1 is a sampling of shocking Senate results since 1972. Unsurprisingly, upsets happen disproportionately in “wave” years, when one party is sweeping the close contests. For instance, quite a few prominent Democratic incumbents were defeated in the 1980 Ronald Reagan landslide; those races were close but broke for the Republicans. Meanwhile, recent Democratic waves in 2006 and 2008 contributed to big upsets, particularly Jim Webb’s (D-VA) narrow defeat of then-Sen. George Allen (R) in 2006, which gave Democrats a one-seat Senate majority, and Mark Begich’s (D) rather amazing 2008 victory over then-Sen. Ted Stevens (R), an institution in deeply Republican Alaska. 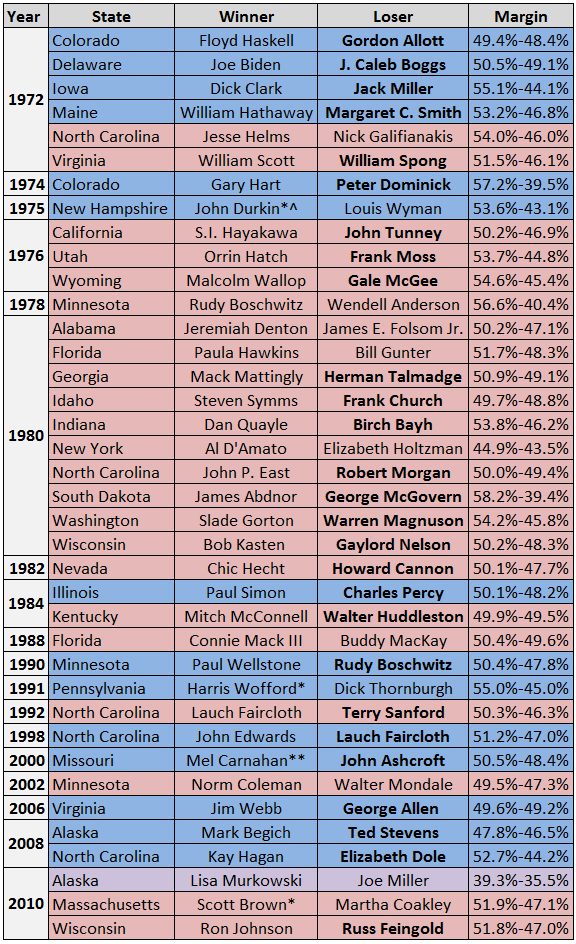 ** Carnahan defeated Ashcroft even though he died three weeks before the election; his wife, Jean, was appointed to the seat.

^ This special election was held after the initial election, in 1974, was so close that the Senate refused to seat either candidate.

Other stunners occur in spite of waves. For instance, Democrats won some surprising upsets in 1972, when Richard Nixon captured his (abbreviated) second presidential term in a “lonely landslide.” Nixon took 60.7% of the vote, but the Republicans won a relatively minor 13 additional House seats and actually lost two Senate seats, net.

Some other races on the list don’t really look like upsets, but they were surprising at the time. For instance, back in 1974, Gary Hart (D) unseated Republican incumbent Peter Dominick (R) by nearly 18 percentage points. Remember, though, that polling was intermittent in state races four decades ago, and there was genuine surprise about George McGovern’s former campaign manager’s triumph in what was then a solidly Republican state. Therefore, Hart makes our list while another blowout — then-Sen. Blanche Lincoln’s (D) landslide loss to John Boozman (R) in Arkansas in 2010 — does not, because Lincoln’s fate was obvious months before the election, in part because of extensive polling of the race.

This list is not comprehensive, and interpretations of what is and is not shocking can vary. Those who want to make other suggestions should e-mail them to goodpolitics@virginia.edu; if we get some good additions, we’ll mention them in next week’s Crystal Ball.

So where can we look for this year’s shocker?

For Democrats, such a victory could come in Indiana, where Sen. Richard Lugar (R) is being forced into retirement after losing a primary to state Treasurer Richard Mourdock. So far, Mourdock has not proven to be an especially strong general election candidate. Polling shows Mourdock and his Democratic opponent, Rep. Joe Donnelly, mired in the low 40s. Mourdock is still the favorite in the Crystal Ball ratings because President Obama has effectively conceded the Hoosier State to Mitt Romney. The resulting GOP coattails should give Mourdock the easier path to victory.

Then there’s North Dakota, where again a massive Romney majority should guarantee a Senate seat for any respectable Republican nominee. Surely, a scandal-free GOP congressman qualifies as “respectable.” Yet there is something about Rep. Rick Berg that is causing voters in the Peace Garden State to consider splitting their ticket for Democrat Heidi Heitkamp, a former state attorney general.  For now, though, we continue to rate the race “leans Republican”– just as we do in Indiana. But there are days when we doubt both leans.

Meanwhile, on the Republican side, the best opportunity for a shock seems to be brewing in Connecticut, where Republican Linda McMahon is waging a strong race against Rep. Chris Murphy (D). McMahon of course lost handily to now-Sen. Richard Blumenthal (D) in 2010, yet Blumenthal was a long-time statewide official. His well-established persona, which Murphy does not possess, made it hard for McMahon’s millions to hurt him, despite Blumenthal’s having falsely claimed to have served in Vietnam. While President Obama appears certain to win Connecticut, his numbers there have not been up to 2008 standards (high single digits now, down from the 22-point landslide of 2008), and this could limit his coattails for Murphy. During the conventions, we changed this race from “likely Democratic” to “leans Democratic” after public polls showed McMahon holding a small lead. We still like the Democratic candidate in the Nutmeg State, but we are monitoring this contest closely.

Another potential surprise cannot be ruled out: Rep. Todd Akin (R), who has been given up for dead after his controversial comments about rape, could prove that roadkill can play possum. We wouldn’t bet on it, naturally, and we still aren’t certain that he’ll stay on the ballot. But considering he is running against highly vulnerable Sen. Claire McCaskill (D-MO) in a state that will be Red this year, you just never know. Let’s remember that in 2000, a deceased Senate candidate, Democrat Mel Carnahan (the state’s governor who was killed in an October plane crash) defeated incumbent Sen. John Ashcroft (R) in this same state. At the moment, we’re keeping our designation of Missouri Senate as a toss-up until the deadline for Akin to exit the ballot passes in roughly two weeks. McCaskill is the acknowledged favorite if Akin stays in the race, but she’ll never be an overwhelming favorite in a Republican-tilting Show Me State.

We have long argued that Rep. Connie Mack IV’s (R) clearest path to defeating Sen. Bill Nelson (D) in Florida was getting an assist similar to the one his father received in his first Senate victory back in 1988. Connie Mack III defeated Democrat Buddy MacKay by less than a percentage point while George H.W. Bush was winning Florida by 22 points over Michael Dukakis. It was a pure coattail victory for Mack.

Romney may very well win Florida, but if the current polling is any indication, it won’t be by anywhere close to as much as Bush 41 did. Obama leads by two percentage points in the RealClearPolitics average in Florida. Given that Nelson leads Mack IV by an average of seven points, we expect Nelson to run ahead of Obama. So even if Romney wins Florida narrowly, Nelson should still be in a good position to win. We look at Florida at both the presidential and Senate levels much the same way as we look at Ohio, where we expect Sen. Sherrod Brown (D) to run ahead of Obama. Consequently, we are upgrading Nelson’s chances to match the rating we’ve consistently given to Brown: Florida’s Senate race now leans Democratic.

To update our running count, this means that if every senator not up for reelection this year returns to the Senate, and every race currently safe, likely or leaning to one party in this election stays that way, the race for the Senate is tied 48-48, with four toss-ups: Massachusetts, Montana, Missouri and Virginia (but of course there’s the Akin caveat in Missouri). These four races could eventually split down the middle, leaving a 50-50 Senate with the vice president breaking a tie.

But that assumes there isn’t a surprise — which, as history tells us, is quite an assumption.