According to a Gallup Poll analysis of recent polling data on the mood of the American public, President Obama appears to face a difficult road to winning a second term in November. The specific indicators of the national mood included in Gallup’s analysis were economic confidence, the percentage of Americans citing the economy as the country’s most important problem, satisfaction with the state of the nation and approval of the president’s job performance.

While all of these indicators have shown some improvement in the past year, according to Gallup they all remain at levels that suggest trouble for the incumbent. For example, only 24% of Americans said that they were satisfied with the direction of the country and 66% cited the economy as the most important problem facing the nation.

There is little evidence about how indicators like satisfaction with the direction of the country or perceptions of the most important problem facing the nation affect the outcomes of presidential elections. However, there is strong evidence that an incumbent president’s approval rating, even several months before Election Day, has a strong relationship to the eventual outcome of the election.

One problem with the Gallup analysis is that it leaves out two other postwar incumbents — Harry Truman and Dwight Eisenhower. Eisenhower’s 69% approval rating in May 1956 was the highest of any postwar incumbent except Lyndon Johnson in 1964, so it is hardly surprising that he was easily reelected. However, Harry Truman’s 39% approval rating in May 1948 was the lowest of any president seeking a second term, including the three who were defeated. Yet Truman, much to the surprise of many pollsters and political observers at the time, was reelected. So what conclusion should we draw from Obama’s 47% approval rating? 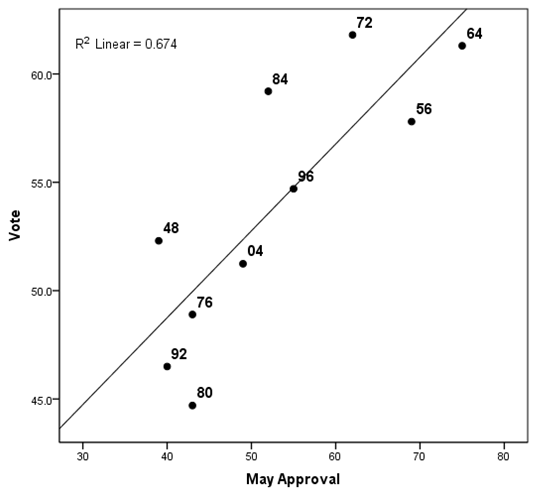 Based on President Obama’s May approval rating of 47% and the prediction line shown in Figure 1, we would expect Mr. Obama to receive 51.6% of the major party vote in November. These results suggest that President Obama is currently a slight favorite to win a second term. However, our ability to predict the November vote based on the incumbent’s May approval rating is limited, as evidenced from the fact that several of the points for individual elections in Figure 1 are well above or below the prediction line. 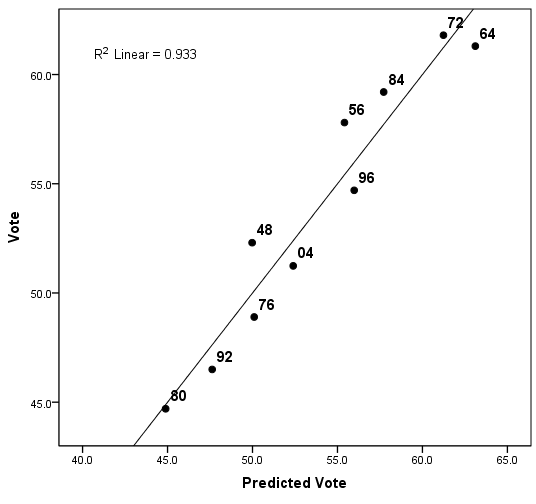 The results displayed in Figure 2 show that a forecasting model including the change in real GDP during the first two quarters of the election year and the time for change factor along with the incumbent’s approval rating in May produces much more accurate predictions of the results of these 10 presidential elections. Despite the limited number of elections included in the analysis, the effects of all three predictors are statistically significant. We are now explaining over 90% of the variation in the incumbent’s share of the vote in November instead of only 67%, and all of the points representing individual elections in Figure 2 are very close to the prediction line.

So what does our improved forecasting model indicate about President Obama’s chances of winning a second term in the White House? That depends of course on the growth rate of the economy during the first two quarters of the year. The government’s initial estimate of real GDP growth during the first quarter of 2012 was about 2%, and growth during the second quarter is expected to be similar. If we assume that real GDP will grow by 2% during the first half of 2012, the full forecasting model predicts that Obama will end up with 51% of the major party vote in November, not much different from what the simple approval-based model predicted.

Whether we base our prediction on President Obama’s 47% approval rating in the Gallup Poll in early May or a more sophisticated forecasting model incorporating economic conditions and the “time for change” factor, it appears likely that we are headed for a very close election in November. Both models make Obama a slight favorite to win a second term. However, the final outcome will depend on the actual performance of the economy and the public’s evaluation of the president’s job performance in the months ahead. Those interested in assessing where the presidential race stands should focus on these two indicators rather than the day-to-day events of the campaign, which tend to dominate media coverage of the election.