One of the persistent ideas regarding vice presidential selection holds that presidential nominees seek running mates from large, competitive states. Guided by that assumption, the Great Mentioners invariably include many politicians from such states on the lists of prospective vice presidential candidates that they compose every four years. The premise seems to be that a running mate can minimally, at best, affect the national election returns but that a popular favorite son or daughter may help swing an important electoral block.

This conventional wisdom regarding vice presidential selection practice encounters one significant problem: It’s wrong. It simply does not reflect the behavior of recent presidential candidates. Presidential nominees presumably know something about electoral politics and are strongly motivated to make politically rewarding choices. Yet in modern times they almost never choose a running mate based on the assumption that he or she can swing a state with a lot of electoral votes. The running mate often comes from a state with few electoral votes and/or a safe state and, when he or she has recently come from a state rich in electoral votes, that fact has played little, if any, role in the selection.

It is hard to explain the persistence of the myth that large state size is a frequent criterion for vice presidential selection. It may come from recalling the instances when candidates come from big states without looking at the factors that influenced the particular selection. It may also reflect the tendency to accept certain beliefs as political truths even after subsequent events or patterns have made them obsolete.

From 1900 to 1956, state size did seem to matter in vice presidential selection. During that period, vice presidential candidates came from large states (20+ electoral votes) 43% of the time, from medium-sized states (10-19 votes) 40% of the time and from small states only 17% of the time. Although other factors, including securing the presidential nomination itself rather than home-state electoral votes, often influenced the choice from 1900 to 1956, it seems likely that coming from a large competitive state was perceived as an important factor during much of this earlier period.

It no longer is. Over the last 50 years presidential candidates seem to have paid little attention to the home-state size of prospective running mates in making their selections. The table below reveals that since 1960, only 26% (seven of 27) vice presidential selections have come from large states (i.e. 20 or more electoral votes). An equal number of running mates have come from small states (i.e. less than 10 electoral votes). 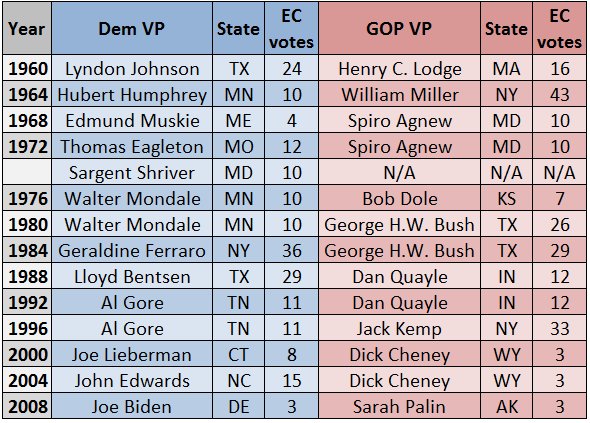 The table, and the 26% figure, actually greatly exaggerates the allure of big-state running mates. A look  beyond the cumulative numbers to the specifics of various selections brings the instances in which home-state size dictates vice presidential selection  closer to 0%.

John F. Kennedy’s selection of Lyndon B. Johnson is generally presented as the classic instance of choosing a running mate to carry a state. Yet Johnson was chosen to help carry the South generally, not simply Texas. He seemed well positioned to carry out that assignment since, as Senate majority leader and runner up for the presidential nomination, he was the leading southern Democrat.

Nor were the other Texas running mates, George H.W. Bush or Lloyd Bentsen, selected to carry their home state. Bush was never elected statewide in his home state, and he lost Senate races in 1964 and 1970. Ronald Reagan even defeated him in the 1980 Texas presidential primary, 51%-47%, and was probably more popular than Bush in the Lone Star State. Bush was chosen to help Reagan with moderate Republicans and independents, not to carry Texas.

The selection of Bentsen might more plausibly be seen as oriented to carrying Texas, but such an analysis would be problematic. By 1988, Republicans had claimed Texas in three of the last four presidential elections and Bush, after an eight-year association with Reagan, was far more formidable in Texas than he had ever been before. Notwithstanding Bentsen’s popularity in his home state and the fact that he had defeated Bush for the Senate in 1970, it seems unlikely that Michael Dukakis thought Bentsen could take Bush’s home state from him. Rather, Bentsen was chosen because of his presidential qualities and as a means to appeal to Reagan Democrats by sending a message that Dukakis was not as liberal as the stereotype of a Massachusetts governor suggested. Had Dukakis wanted to choose a running mate to swing a rich electoral dowry, he would have selected Ohio Sen. John Glenn, whose 23 electoral votes seemed more competitive. (In fact, Bush won Texas by 12.6% and Ohio by nearly 11%; Bentsen was reelected to his Senate seat, 59% to 40%, which he sought concurrently).

The three other large state selections (William Miller, Geraldine Ferraro and Jack Kemp) clearly were not chosen to carry their home state of New York. None had ever run for state office outside of their congressional district. Barry Goldwater chose Miller, by his own admission, because of his skill as a partisan campaigner who might provoke Johnson into some blunder. Walter Mondale chose Ferraro to reshuffle the political landscape generally and to communicate bold leadership consistent with his political values. Bob Dole chose Kemp because he was a presidential figure who could help focus attention on the tax and economic issues the Republican campaign sought to emphasize. Surely Goldwater and Dole did not expect to carry New York with Miller and Kemp on their tickets, and Mondale hoped the Ferraro choice would help more generally.

Nor were the running mates from medium-sized states chosen to bring their home states into the fold. Surely Richard M. Nixon did not expect Henry Cabot Lodge to enable him to carry Massachusetts against Kennedy, the incumbent senator from that state who had grown ever more popular at home since defeating Lodge in 1952. John Edwards was unpopular in North Carolina, a factor that probably influenced his decision not to seek reelection to the Senate in 2004. John Kerry did not choose Edwards to carry North Carolina but because Edwards’ effective primary campaign suggested he would be an able and charismatic campaigner against George W. Bush and Dick Cheney. Home state politics did not explain the other selections from medium states either.

Some of those passed over clearly had some liabilities that made their selections less attractive. But that’s part of the point. Vice presidential selection is much more complicated than focusing on the single factor of home state electoral votes, and generally that factor now plays little or no role.

Obama’s selection of Biden in 2008 provides a classic case of a candidate explicitly rejecting the larger swing state criteria in order to choose a running mate from a tiny, safe state. Obama passed over Gov. Tim Kaine (Virginia, 13) and Sen. Evan Bayh (Indiana, 11) — not to mention New York Sen. Hillary Clinton, a large, safe-state alternative — to select Biden. Even without Kaine or Bayh on the ticket, Obama won their two states, which had not voted for a Democratic presidential candidate since LBJ’s landslide win in 1964. Indeed, the 2008 vice presidential contest involved candidates from two of the seven states with only three electoral votes (Alaska and Delaware).

The nationalization of presidential politics has made one-state vice presidential selections problematic. Given information age technology, things a vice presidential candidate says or does anywhere are immediately broadcast everywhere if deemed worth knowing. With a few notable exceptions, presidential candidates who are perceived as having a reasonable chance of winning tend to prefer running mates of presidential quality over options who, though from states rich in electoral votes, have other baggage. Could Humphrey, in 1968, have captured New Jersey, which he lost by about 2%, with Gov. Richard Hughes on his ticket? Perhaps, but would those 17 electoral votes have made up for what Humphrey would have lost without Muskie’s extraordinary vice presidential campaign? Might Al Gore have swung Florida with Graham, instead of Lieberman on his 2000 ticket? Again, maybe, but the Lieberman selection also helped recast Gore in a way that gave his campaign a boost generally. The Graham selection might have been seen as simply a play for Florida, and accordingly not provided the favorable response to Gore that the Lieberman choice produced. Alternatively, Bush might have won Pennsylvania with Ridge on his ticket, but the cost probably would have been a messy convention with large parts of the Republican base unhappy about Ridge’s stance on abortion.

It may be that the Republican presidential nominee in 2012 and candidates from both parties in the future will select running mates from large states. But recent history suggests that presidential candidates, to their credit, emphasize factors other than the number of electoral votes from the prospective running mate’s home state. Pundits and citizens should too.