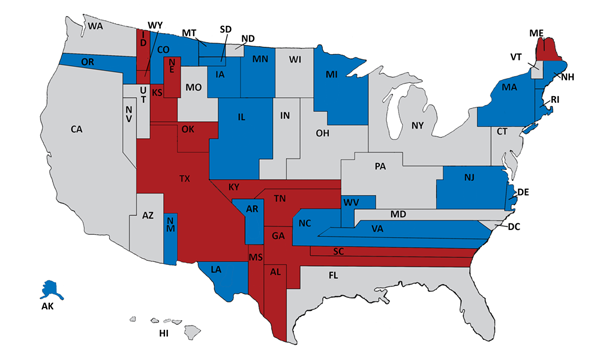 This map shows the 2014 Senate races in blue and red, with the states sized according to their population and colored based on their current occupant. (The gray states are those with no regular Senate election this year.)

Senate Class 2, the one contested this year, is far less representative of the nation as a whole than the two other classes. Its 33 states contain slightly more than half (51.8%) of the nation’s population. Class 1 (the 2012 class) also features 33 states, but those states host three-quarters (75.2%) of the population; Class 3, coming in 2016 with 34 states, is similar to Class 1, with 72.6% of the population.

One big reason the 2014 Senate class is so unrepresentative is that California, with its 38 million residents (about an eighth of the country’s population), has no Senate election this year. Neither do New York, Florida, Pennsylvania and Ohio, respectively the nation’s third, fourth, sixth and seventh biggest states. No Senate election is ever a national election — but this year’s least of all.

Republicans, as mentioned, need to net six seats to win the Senate, and there are six Democratic-held seats on this map where President Obama got less than 45% of the vote in 2012. Let’s assume the GOP nets those six seats, but everything else remains the same, which is a perfectly plausible scenario. Those states — Alaska, Arkansas, Louisiana, Montana, South Dakota and West Virginia — represent just 3.8% of the U.S. population.

Of course, the actual number of residents who are eligible to vote, who show up to vote and who cast a ballot for the GOP candidate is an even smaller share. Assuming turnout in line with the most recent midterm, control of the Senate could end up being switched by 2 million Republican voters, or less — just 0.6% of the American population. That would hardly be a national mandate, though Republicans would assuredly claim one anyway.