We all think we know which states are the pivotal players in the Electoral College. The Crystal Ball’s most recent look at the map showed that there are seven “Super Swing States:” Colorado, Florida, Iowa, Nevada, New Hampshire, Ohio and Virginia. How these states vote on Nov. 6 will likely decide the outcome of the 2012 presidential contest.

A simple yet meaningful way to look for the decisive state is to order the states according to the winner’s margin of victory. By arranging the states in this way, we can find the cut-off point where the winning candidate crosses the 270 electoral vote threshold. The state that gives a candidate a majority of the 538 votes in the Electoral College is the decisive state.

In 2008, that state was Colorado. Obama won the Centennial State by about nine percentage points over John McCain; had Obama failed to carry Colorado and every state that he won by a smaller margin, the Electoral College result would have been a 269-269 tie, a result that would have thrown the election into the House of Representatives. (Actually, the one electoral vote Obama won in the Second District of Nebraska would have given him a 270-268 victory, but our analysis here is state-based.) By carrying Colorado’s nine electoral votes, Obama clinched his victory.

Considering that the final tally in 2008 was Obama 365, McCain 173, it is easy to overlook the concept of the decisive state. In a blowout win, such as an FDR or Reagan landslide, the margin of victory in the decisive state can be nearly 20 percentage points. However, in a too-close-to-call election, that margin might be tenths, even hundredths, of a percentage point. Just look at 2000, when George W. Bush defeated Al Gore by .01% of the vote in Florida to reach 271 electoral votes. Flip Florida and Gore wins.

Examining the decisive states in recent elections naturally prompts the question: Which state has been decisive most often in American presidential elections? In the spirit of the 2000 election, it’s a tie, at least if we start our analysis with the first Democrat-versus-Republican contest in 1856. The chart below details the deciding state in each election, while the map illustrates which states have been most decisive. Keep in mind that the electoral vote count has changed over time as states were added and populations have shifted; the current total, 538, was not reached until 1964, when the District of Columbia first cast its three electoral votes. 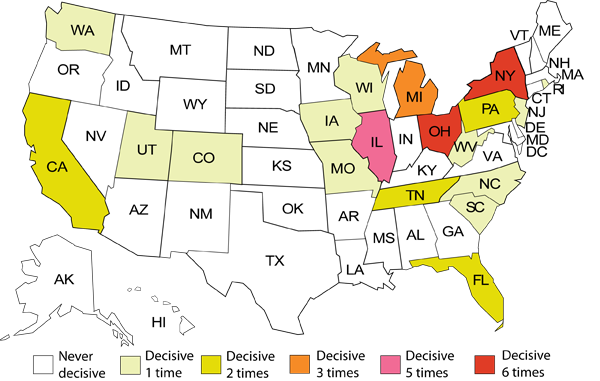 It may surprise contemporary election junkies that New York has been one of the two most decisive states in history. Yet it will shock no one that Ohio is the other. Both states have clinched election victories six times, accounting for 12 of the 39 elections between 1856 and 2008. Ohio did so most recently and memorably in the close 2004 contest. For Richard Nixon, Ohio proved to be a good friend — it went for him in his 1960 loss and ensured him victory in both 1968 and 1972. As for New York, the last time the Empire State put a winner over the top was in 1944, when its then-47 electoral votes guaranteed Franklin Roosevelt’s final presidential triumph. But New York’s heyday as the nation’s pivotal swing state really came in the late 19th century, when it decided three straight closely-fought elections (1880, 1884, and 1888).

The Land of Lincoln is the next most-decisive state, with five wins to its name. Appropriately, Illinois’ electoral votes were the deciding factor for Abraham Lincoln’s reelection in 1864. Next is three-timer Michigan, which put Ronald Reagan and George H.W. Bush over the top in 1984 and 1988, respectively. Four states have proven decisive twice (California, Florida, Pennsylvania and Tennessee), and 11 have done so once. The smallest state to settle an election is Rhode Island, whose then-five electoral votes certified Warren G. Harding’s win in his 1920 landslide victory.

What state will prove decisive in 2012? Ohio is always in contention, but so might be Colorado, Iowa, New Hampshire, or several other Purple swing states. Given that Virginia was the state closest to the national average in 2008 (Obama took 52.9% nationally and 52.6% in the Old Dominion), the Crystal Ball’s home state could be the crucial, final domino for one party or the other in November — which would be its first turn as the decisive state in the Democrat-versus-Republican era.