Which candidate will emerge from the crowded Republican presidential field next year? Can anyone stop or at least slow down Hillary Clinton’s seemingly inevitable march to the Democratic nomination? Will Democrats be able to match the GOP in Super PAC spending? And will there be new revelations about Clinton’s e-mails or the Clinton Foundation’s fundraising practices?

Regardless of whether the Republican nominee is Jeb Bush, Scott Walker, Marco Rubio, or one of the longer-shots in the GOP field, regardless of how many delegates Bernie Sanders or Martin O’Malley manage to win in the Democratic caucuses and primaries, regardless of any new Clinton e-mail or fundraising controversies, and regardless of how many millions of dollars are spent by conservative and liberal Super PACs, the basic contours of the presidential race will not be affected.

The most important influence on the 2016 presidential election as well as the House and Senate elections will be the division of the American electorate into two warring partisan camps. In the seven decades since the end of World War II, Democrats and Republicans have never been as divided as they are today.

The rise of negative partisanship

The 2012 election saw the highest levels of party loyalty and straight-ticket voting since the American National Election Studies began tracking American voting patterns in 1952. Over 90% of Democrats and Republicans, including voters who claimed to be independents but indicated that they leaned toward one party or the other, supported their party’s presidential candidate. Close to 90% supported their party’s House and Senate candidates as well, and 83% cast a straight-party ballot for president, House, and Senate.

There is no reason to expect voting patterns in 2016 to differ from those in 2012. Party loyalty has surged in the American electorate since the 1980s even as the percentage of voters claiming to be independents has risen to a record level. This surge in party loyalty has involved strong identifiers, weak identifiers, and independents who lean toward one of the two parties alike.

These exceptionally high levels of party loyalty and straight-ticket voting combined with increasing reluctance to openly identify oneself as a party supporter reflect a fundamental change in the way Americans relate to the Democratic and Republican parties — the rise of negative partisanship. A growing number of Americans have been voting against the opposing party rather than for their own party.

Over the past several decades, partisan identities in the United States have become increasingly aligned with other salient social, cultural, and political divisions in American society. Supporters of each party have come to perceive supporters of the opposing party as very different from themselves in terms of their social characteristics, political beliefs, and values, and to hold strongly negative opinions of the opposing party’s elected officials, candidates, and supporters. Negative perceptions of the opposing party are also reinforced by exposure to partisan news sources, which have proliferated in recent years.

Since 1980, the proportion of party supporters who have strongly negative feelings toward the opposing party has risen sharply. Figure 1 shows the trends in the mean rating by party supporters, including leaning independents, of their own party and the opposing party on a feeling thermometer scale. This is a scale that ranges from zero degrees, the most negative rating, to 100 degrees, the most positive rating. A rating of 50 degrees on the scale is labelled neutral.

Figure 1: Feeling thermometer ratings of own party and opposing party, 1980-2012 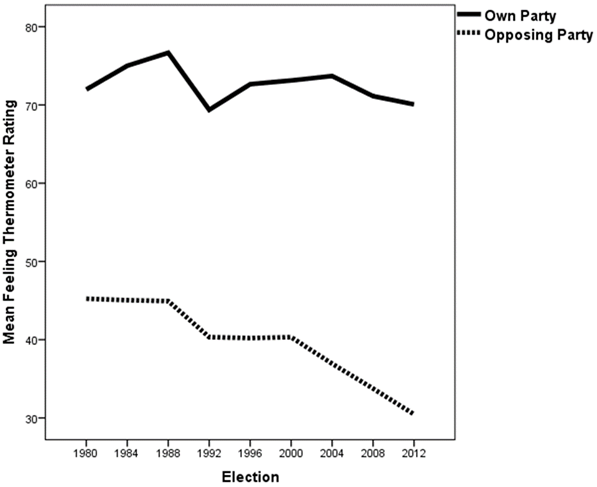 These trends are almost certain to continue in 2016. If anything, feelings toward the parties and presidential candidates may be even more polarized than in 2012 given the deep divisions between Democrats and Republicans over issues ranging from immigration and health care to climate change and same-sex marriage and the likelihood of hundreds of millions of dollars in spending on attack ads by each side. And while the economy will have an effect on the outcome of the election, that effect is likely to be small unless conditions improve or deteriorate markedly during 2016.

We can predict with a high degree of confidence that party loyalty will be very strong in next year’s elections. The rise of negative partisanship means that very few Republicans or independents who lean toward the Republican Party will vote for Hillary Clinton or any other Democratic presidential candidate in 2016. Likewise, very few Democrats or independents who lean toward the Democratic Party will vote for Jeb Bush, Scott Walker, Marco Rubio, or any of the other potential Republican candidates. “Pure independents,” voters with no partisan preference at all, will probably make up less than 10% of the electorate, and if 2016 is like other recent elections, they will end up splitting their votes fairly evenly between the parties.

According to a recent study by the highly respected Pew Research Center based on more than 25,000 interviews with eligible voters, during 2014 Democrats and independents leaning toward the Democratic Party outnumbered Republicans and independents leaning toward the Republican Party by a margin of 48% to 39%. While the Democratic margin is likely to be somewhat smaller among actual voters than among eligible voters, it should still be large enough to give the Democratic candidate an advantage. Moreover, the Democratic margin in leaned party identification could be pushed up a bit by the expected increase in the nonwhite share of the electorate between 2014 and 2016.

In the House elections, Republicans have a significant advantage, partly due to the inefficient distribution of Democratic voters across districts. Democratic voters are heavily concentrated in a relatively small number of districts in large urban areas, which is partly due to gerrymandering by Republican-controlled state legislatures following the 2010 midterm elections. As a result, there are considerably more Republican-leaning districts than Democratic-leaning districts in the nation. In 2012, for example, even though Barack Obama won the national popular vote by about four percentage points, Mitt Romney actually carried 227 House districts to only 208 for Obama. This GOP advantage in district partisanship, combined with the strongly partisan voting patterns in House elections, means that even if Democrats hold the White House in 2016, they are unlikely to pick up enough seats to regain control of the House.

Democrats have a better chance to take back the Senate next year, which would require a net pickup of four or five seats, depending on which party wins the presidential election. None of the 10 Democratic seats that are up for election in 2016 are in states that were carried by Mitt Romney in 2012, while seven of the 24 Republican seats are in states that were carried by Barack Obama. Normal partisan voting patterns in a presidential election year should allow Democrats to pick up a number of those seats.

The rise of negative partisanship has drastically altered the nature of electoral competition in the United States. Intense dislike of the opposing party and its candidates by supporters of both parties means that party loyalty and straight-ticket voting are much more prevalent than in the past. As a result, the outcomes of elections for offices from the presidency down to the state and local level are overwhelmingly determined by the balance of party support in the electorate while local factors such as the records and personalities of the candidates are much less important than in the past.

The rise of negative partisanship in the American electorate appears to be part of a vicious cycle of mutually reinforcing elite and mass behavior. Confrontational politics in Washington and in many state capitols is causing Democratic and Republican voters to develop increasingly negative views of the opposing party and to vote along party lines from the top of the ticket to the bottom. Negative views of the opposing party among voters, in turn, encourage political elites to adopt a confrontational approach to governing. Given these mutually reinforcing patterns of elite and mass behavior, negative partisanship is likely to remain an important feature of American politics for the foreseeable future.