Had evangelical Christians had their way in 2006’s Pennsylvania Senate election, then-Sen. Rick Santorum (R) would have been reelected in a landslide: among the quarter of the electorate that identified themselves as such, Santorum won 59% to 41%. The trouble for Santorum was that, of the non-evangelical three-fourths of the electorate, Santorum lost to his opponent, Democrat Bob Casey, by two to one. Santorum was defeated in that race by about 17 points — one of the worst drubbings in modern history for an incumbent senator (see chart at this link).

If anything, looking at a year when Santorum did poorly makes it easy to identify his strength, which is with religious conservatives who are concerned about social issues.

Of nine contests in this year’s Republican primary so far, only the first five — Iowa, New Hampshire, South Carolina, Florida and Nevada — have exit polling. In all of those states Santorum did better among self-described “very conservative” and “evangelical/born-again Christians” than he did overall. (And, you’ll recall, he won just Iowa, very narrowly.) Additionally, Santorum scored well with voters who were most interested in conservative social issues. For instance, in South Carolina, where Santorum placed third with 17% of the vote, Santorum won just two groups of voters: 51% of those who listed abortion as their top issue and 42% who said their most important quality in a candidate was “strong moral character.”

Electorally, therefore, Santorum appears to have two things in his favor as he tries to build on his stunning rise over the past week and a half. First, religious conservatives, a key demographic in many forthcoming state contests, love him. Second, he is not Mitt Romney and has become the leading “not-Romney” candidate, an odd title that has determined a large chunk of the nominating battle so far.

There are 15 states, mainly Southern, where more than 30% of the population is part of the “Evangelical/Protestant Tradition,” according to the Pew Forum on Religion and Public Life’s U.S. Religious Landscape Study. Of these 15, which includes the entire old Confederacy save for Florida, only two have voted so far: South Carolina (45% evangelical) and Missouri (37%). As we know, Romney fared poorly in both states. Exit polling confirmed that close to two-thirds of the voters in the Palmetto State’s primary were evangelical/born-again voters, and while we don’t have any fresh exit polling from Missouri, the 2008 exit polling indicated that the electorate was 55% evangelical. Therefore, it will be a surprise if Romney runs strongly in many of the remaining, leading evangelical states.

A silver lining for Romney is that two of these states, Indiana and Virginia, could go to him by default. Santorum and Gingrich aren’t on the ballot in Virginia, and Santorum likely won’t make the Indiana ballot either. Lackluster organization and fundamental errors in his opponents’ campaigns could be a hidden Romney ally, and not just in Hoosier land and the Old Dominion.

Trying to project delegate counts at this point is largely a fool’s errand; as the University of Minnesota’s Smart Politics website noted recently, eight different news organizations had eight different delegate counts, and that’s for contests that have already been completed. Nonetheless, we’re willing to take a stab at some projections as to how this race might turn out, realizing the dunce’s cap will likely be earned. 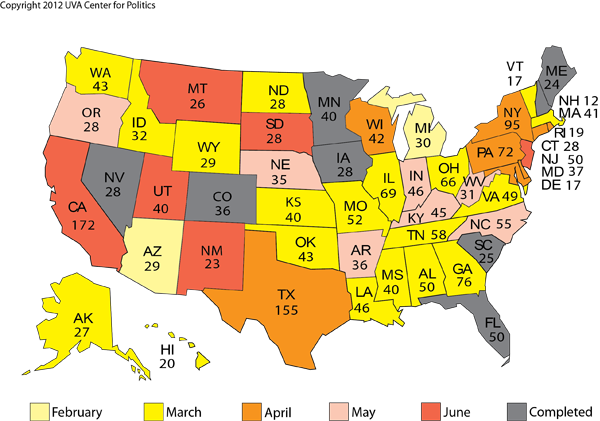 States with “(WTA)” may use a winner-take-all system if a candidate reaches a specific threshold, typically 50%.

Territorial abbreviations and info: AS – American Samoa, MR – North Marianas, PR – Puerto Rico, VI – Virgin Islands; Guam has not yet finalized a date for its caucus.

*Texas is almost certain to move its primary date to late May or June but it has not yet been officially moved from April 3.

**The Missouri primary was non-binding and Newt Gingrich did not qualify for the ballot there. The GOP will hold a caucus on March 17 to determine its delegates.

Within the cold data of this chart is a contest for the mind, heart and soul of the Republican Party. It’s fascinating that the race is shaping up much like a general election, in this sense: The South is pitted against the east and west coasts, with the middle of the country — the traditional Midwest in particular — acting as a tiebreaker.

Our highly tentative projections for the remainder of the primary season are illustrated in Chart 2. Our (debatable) assumption is that, despite his troubles, Romney remains the favorite to be the nominee. Thus, we have split the remaining contests into three categories: “Romney favored;” “Romney underdog;” and up-for-grabs states. 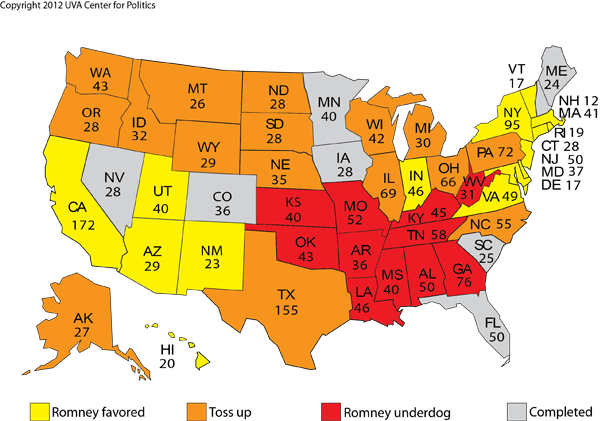 Notes: The number next to each state’s name is its delegate count.

In apportioning 11 states to the “Romney not favored” column, we based our decisions primarily on the number of evangelical/born-again voters in each state. This is a good proxy for determining how conservative a state is: the more evangelicals in a state, the more conservative it is. All 11 of these states, with the exception of Kansas, strongly identify with the “evangelical Protestant tradition” as defined by Pew; also, in the states where exit polling is available from 2008, these Republican primary electorates were particularly evangelical, often ranging from three-fifths to three-fourths of all participants. Again, states such as these have been bad for Romney so far, and there’s no indication that he will do better in similar places. Santorum and/or Gingrich should perform well in these states, which are almost all strongly Republican in general elections. If Romney becomes the nominee, we presume he will carry them more or less automatically.

The states listed as toss ups are, perhaps not coincidentally, mainly competitive in general elections. Michigan on Feb. 28 may be the most important upcoming primary, and its evangelical profile (about two in five voters in 2008) is very similar to Florida. Recent polling shows a surging Santorum with an edge in Michigan; Romney will have to fight to hold the state where he grew up. Following that, Ohio, the super-swing state, becomes the key primary on Super Tuesday. Again, its evangelical count is similar to Michigan and Florida. Pennsylvania’s contest comes in April. Romney might be able to put out the anti-Romney insurgency if he can win in Santorum’s senatorial state. Less is known about Pennsylvania because it lacks primary exit polling data from 2008.

Four other Northeastern states vote along with the Keystone State on April 24, including delegate-rich New York. Even if Romney loses Pennsylvania, he probably will do well in other places that day, one of the best on the calendar for Romney.

Going into May, North Carolina will be the next key state. Its demographic profile is similar to its Southern neighbors. While there is no exit polling data from 2008, the Pew religion study pegs its evangelical population at 41%; by comparison, this is higher than Texas (34%) or Missouri (37%). Again, this is tricky territory for Romney, but we have it as a toss-up right now. We would expect Romney to make a major play for the Tar Heel State. (Also voting that day is Indiana, but as noted earlier, Santorum likely won’t be on the ballot.)

Throughout the calendar, Ron Paul — waging his guerrilla war against the Republican Party elite — could spring an upset or two while picking up delegates, thereby scrambling the results. So too could Gingrich, who might win in the Deep South, especially in his home state of Georgia and maybe in Alabama and Mississippi.

Romney is virtually guaranteed to finish the primary season with a huge win. The Utah primary, held on June 26, will support him in a landslide. Three weeks before that final contest, there are five primaries on June 5, including New Jersey and California. These states’ moderate profiles and expensive media markets favor Romney. Gov. Chris Christie of the Garden State will surely spend some political capital to deliver for Romney. If the frontrunner is within 250 delegates of clinching the nomination at the end of May, the winner-take-all contests in California (172 delegates), New Jersey (50) and Utah (40) could put him over the top. One remaining wild card is Texas, which almost certainly will have to move its primary back from April 3 because of a dispute over redistricting. The Lone Star State might not vote until late June, perhaps making its primary and big slate of delegates irrelevant — or hugely decisive.

When the remaining playing field is surveyed in its entirety, it is possible to conclude that Romney could be in better shape to win the nomination than he looks right now. While he is bound to take more losses over the next few months, particularly in Southern or Border states, Romney can go a long way toward becoming the GOP’s standard-bearer within the next month by winning Michigan and Ohio. Both will be major hurdles and neither will be easy — but then, for Romney, what really has been this year?

All four Republican finalists are now battle-tested and hardened. Unless their money dries up, they’ll try to go the distance, with unpredictable consequences. Probably the only agreement this quarrelsome quartet could reach at the moment is that Winston Churchill was right when he said, “Politics are almost as exciting as war, and quite as dangerous. In war you can only be killed once, but in politics many times.”