— As of this writing, just 379 of 435 House districts will have incumbents running in them this November. That’s the second-lowest total of the post-World War II era.

— The best pickup opportunities for both parties come in these open seats.

— Since our last open seat update, the Democratic potential in these seats has grown: It’s possible the Democrats could get a third or more of the way toward flipping the House just through netting gains among the open seats.

Updating the state of play in the House’s open seats

In the roughly two and a half months since we last assessed an already-long list of House open seats this cycle — and even in the week since my colleague Geoffrey Skelley took a deep look at the pace of House retirements historically — the number of open House seats has continued to increase.

This cycle will not match 1992’s historically high level of open seats, but the total likely will grow at least a little. Filing deadlines have passed in many states, but filing remains open or has not yet opened in states containing about 40% of the total number of House seats. And candidates can also leave the ballot after filing has closed.

Case in point: Rep. Ryan Costello (R, PA-6) announced his retirement over the weekend despite filing for reelection last week. Costello was one of the big losers of the recent Pennsylvania redistricting, which the Democratic-controlled state Supreme Court ordered to counteract an aggressive Republican gerrymander instituted after the 2010 election. In terms of 2016 presidential performance, the new PA-6 favored Hillary Clinton by nine points, while the old version only voted for her by less than a point. Costello compounded the Republicans’ problems in the district by removing himself from the ballot, leaving the party unable to replace him and in all likelihood handing the nomination to little-known attorney Greg McCauley (R). The Democratic nominee is slated to be Chrissy Houlahan, an Air Force veteran who had close to $1 million cash on hand as of the end of 2017. We moved PA-6 from Toss-up to Likely Democratic over the weekend after it became clear that Costello would retire.

Tables 1 and 2 show the 56 total open seats. This list does not include two vacant seats that are holding special elections later this year, AZ-8 and OH-12, because we anticipate that the eventual winners of those districts will be on the ballot in November as incumbents. It currently does include two other vacant seats: MI-13, previously held by ex-Rep. John Conyers (D), and NY-25, previously held by Louise Slaughter (D), who died earlier this month. As of right now, it does not appear as though either seat will be filled prior to the November election, so we’re counting both as open seats (though it’s possible there will be a special election prior to November in NY-25, in which case we’d treat it the same way we treat AZ-8 and OH-12). Table 1 ranks the seats by their likelihood to flip to the other party, while Table 2 lists (in alphabetical order) the seats where the incumbent party appears to be a lock to hold the seat.

Table 1: Competitive open House seats ranked in order of their likelihood to switch parties in November

Notice that Table 1 is led by three Pennsylvania seats, an indication of how redistricting has unsettled the state. The two best Democratic pickups in the country are now in two suburban Philadelphia districts, PA-5 and PA-6. Prior to the remap, both seats were probably 50-50 or even leaning Republican, although even before the new map came out, retiring Rep. Pat Meehan (R) was weakened by a reported sexual harassment settlement that may have forced his exit even if the map had stayed the same. Sandwiched in between those two seats, and rated a Safe Republican flip, is PA-14, which is the closest analog to the old PA-18, which Rep.-elect Conor Lamb (D) narrowly won in a special election earlier this month. Lamb is now running for reelection against another incumbent, Rep. Keith Rothfus (R), in the reconfigured Pittsburgh-area PA-17. This newly minted swing seat is much more competitive on paper than the district Lamb just won, although Lamb is up against an incumbent this time.

Despite Congress’ persistently low approval rating, voters seem to give their own member the benefit of the doubt. According to the electoral reform advocacy group FairVote, incumbents won an extra 3.3 percentage points of the two-party vote in 2016, which is actually double that in terms of margin — it means that one would expect an incumbent to perform about 6.5 points better in terms of margin than a generic candidate of the same party. That kind of incumbency advantage is also apparent when looking at the presidential party performance in open seats vs. incumbent-held seats during the last three midterms: 2006, 2010, and 2014, all wave years for the non-presidential party. In those elections, the performance for presidential party incumbents dropped 12 points in margin on average from the previous election, while the presidential party candidates defending open seats saw their performance fall by an average of 22 points in margin from the incumbent’s showing in the previous election.

In other words, the Democrats should have an easier time flipping some GOP open seats than some demographically similar ones defended by Republican incumbents.

Go back to Table 1. Of 24 listed seats, 17 are held by Republicans, including six where we currently rate the Democrats as favorites to score a takeover. The Republicans’ best pickup opportunities all come in open seats, too: They should win the new and open PA-14 (especially with Lamb running elsewhere), and they have roughly even odds in two Trump-won open districts in Minnesota.

When we first looked at the mounting number of open House seats in mid-January, we thought a good goal for Democrats would be to net a half-dozen seats from that group, or a quarter of the 24 net seats they need to flip the House. Now, after the Pennsylvania remap and a handful of other retirements, we think the Democrats should net more like eight seats from the open districts, or a third of what they need, and they have the potential to do better. Conversely, anything less than that might indicate that they would fall short of winning a House majority.

One thing to watch as the campaign progresses is whether some of the open Republican seats where we now favor Democrats remain competitive throughout the election season. For instance, can Democrats in open seats like AZ-2, FL-27, and NJ-2 basically put those districts away by the fall? Or are Republicans still spending money in those districts closer to the election, indicating that their front line of defenses remain intact?

And, more pressingly in the short term: Will there be more retirements? In assessing the history last week, Geoffrey Skelley said we should expect at least a few more.

In recent weeks, the national numbers for Republicans are once again showing some slight improvement. The president’s approval rating is up to roughly the 40%-42% range in the polling averages, which is poor but slightly better than it has been, and the Democratic lead in the House generic ballot is in the six-to-seven point range, down a couple of points from recent highs. According to a model by Alan Abramowitz, a lead of as few as four points could be enough for the Democrats to win the House, but Democrats would feel better about their odds if that lead was more like nine or 10 points on Election Day. That’s about where the Democratic lead was when they won the House in 2006 and 2008, and where the GOP lead was when Republicans won the House back in 2010. Just for reference, Table 3 shows the final pre-election House generic average according to RealClearPolitics and the actual House popular vote over the past decade and a half. 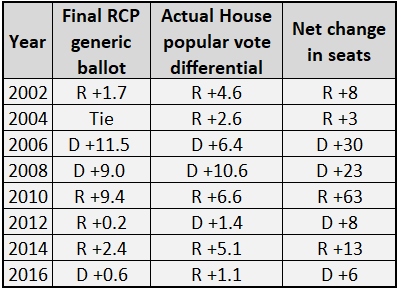 On the other hand, while those big-picture national polling indicators aren’t as bad as they’ve been for Republicans, other, more micro-level indicators look worse for the GOP. The new Pennsylvania House map seems almost certain to cost them seats, especially when coupled with retirements the new map triggered, specifically Costello’s. Also problematic is the high number of Republican open seats in the House in general. Unlike the president’s approval and the House generic ballot, which can bounce around between now and the election, the number of open seats cannot get better for either party: Once a filing deadline comes and an incumbent is out, that incumbent is out for good. Nor can the new Pennsylvania House map be rolled back — the U.S. Supreme Court declined to intervene last week, locking that map in for 2018.

Meanwhile, Republicans are still reeling from their loss in the PA-18 special a couple of weeks ago, and Republican outside groups are beginning to spend money in the next House special, AZ-8, which is coming up on April 24. Republicans are favored to hold that seat, but anything less than a double-digit win in the deeply conservative Phoenix-area seat would be a weak showing.

The special elections in state and federal races held so far this cycle across the country, and generally strong Democratic performances in such races, provide an imperfect guide for the fall because nearly all of them did not feature incumbents (a few had appointed incumbents). But the special election results may provide hints for open seats, which are an increasingly important piece of the puzzle for Democrats as they seek to win the House.