What can we expect from the Florida primary? What are the possible repercussions of a Gingrich victory versus those of a Romney win in the Sunshine State? Check out our latest Crystal Ball video by clicking on the picture. Below, we examine the Republican electoral situation and what a Gingrich candidacy might mean:

In the aftermath of voting in the deeply conservative South Carolina primary, one voter quoted by The Washington Post seemed to summarize what Republicans there were looking for in a candidate:

Many voters said they liked the scrap in the former House speaker’s personality — his willingness to seek confrontations with his GOP rivals and the news media. That, they said, was what the GOP would need in the race against President Obama this fall.

“I think Mitt Romney is a good man,” said Harold Wade, 85, leaving a polling place in this picturesque seaside suburb outside Charleston. “But I think we’ve reached a point where we need someone who’s mean.”

And Gingrich, he said, was the only one mean enough.

Republicans don’t just disagree with President Barack Obama; they viscerally dislike him. And, as Mr. Wade indicates, they don’t just want a candidate who can beat Obama. They are seeking someone who will unequivocally bash and bloody him.

As has been clear from recent debates, Mitt Romney is not that candidate, at least compared to the South Carolina winner and this week’s poll leader in Florida, Newt Gingrich. On the stages in South Carolina, Gingrich mastered both the moderators and the crowd, and Romney did himself no favors with his dissembling answers to repeated requests to release his tax returns. (Romney finally released his most recent tax returns on Tuesday.) By contrast, when Romney finally went on the offensive against Gingrich in the first Florida debate on January 23, his quizzing of Gingrich was mainly mild-mannered, as though he were building a genteel case to bring to his country club’s decorum committee.

The presumption among the press — and among us analysts — for months has been that Mitt Romney was far and away the most electable candidate in the fall against President Obama. But the actual voters, at least in South Carolina, felt differently: in exit polling, among the 45% who said that the most important quality in a nominee was the ability to defeat Obama, they preferred Gingrich 51% to 37% over Romney. Granted, considering how South Carolina Republicans broke for Gingrich, such a result from the exit polling wasn’t really surprising: when supporting a candidate, voters likely don’t think that their guy is a loser. Plus, we also wonder — just anecdotally from interviews aired after the election — whether voters were conflating Gingrich’s ability to win in November with his ability to win debates. Obviously, those are two vastly different things, and with only a few exceptions — 1960’s Nixon/Kennedy debates and 1976’s Gerald Ford gaffe on whether the Soviet Union controlled Eastern Europe — general election debates are not all that vital to the outcome anyway.

A tale of two maps

To be clear, President Obama is vulnerable. His approval rating – 46% approve, 48.6% disapprove, according to the RealClearPolitics approval average — is middling. And against Mitt Romney, Obama’s vulnerability shows: in Pollster.com’s average of national polling, Obama leads Romney just 46.5% to 45.3%. But against Gingrich, the average tells a very different story — Obama, at 49.9%, leads Gingrich (39.1%) by more than 10 points.

Granted, there are outliers: Gallup on Tuesday had both Romney and Gingrich running evenly with Obama, both down 50% to 48%. But the bulk of the polling data indicates that Romney, at least at this point, is the stronger candidate against Obama.

Why does Romney fare better? Well, the best candidate against Obama remains “generic Republican” — that make-believe person who leads Obama by a single slim point, according to RealClearPolitics. Let’s be honest here: Romney’s the closest thing out there to a generic Republican available. He is not going to steal the presidency away from the incumbent if Obama’s having a good year and the economy is solid. Rather, if the country is ready to make a change, then Romney would be a credible alternative. The national polling numbers bear that out; they also show that Gingrich, at least right now, is not seen as a similarly acceptable alternative.

Let’s look at this a different way. Chart 1 shows the Crystal Ball’s Electoral College map. At this point, it is effectively a map pitting Obama vs. a generic Republican; such a race, we believe, would be close, given the president’s relative weakness. 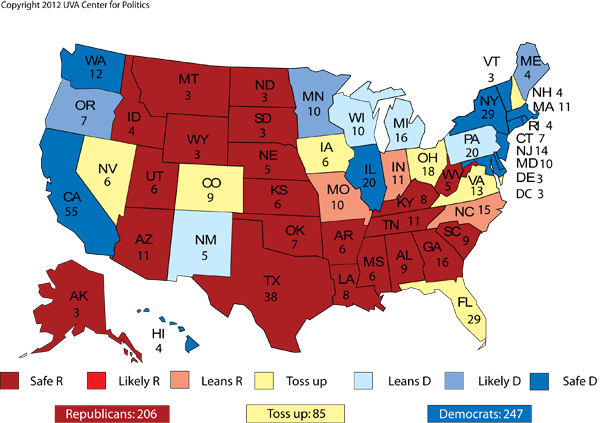 Romney, were he the nominee, could potentially make this generic map even better for Republicans. He has no obvious weaknesses in any of the swing states, at least as measured by head to head polling, which we fully grant is not necessarily all that predictive at this stage. Also, he could potentially make some of the competitive states harder for Obama: he could mobilize the not-insignificant Mormon population in Nevada to help in that state and play off his relative home field advantages in Michigan (his father was governor of the state he grew up in) and New Hampshire (he served as governor of neighboring Massachusetts and has built deep bonds with the Granite State, which paid off in his recent primary romp there). In fact, if Romney were the nominee, we’d likely switch New Hampshire to “leans Republican” from toss-up. While this only represents four electoral votes, consider this: take another five Obama states that went for George W. Bush twice (Florida, Indiana, North Carolina, Ohio and Virginia) and put them in Romney’s column, and then add New Hampshire and all of John McCain’s states, and Romney is president.

Again, polling at this early stage is not particularly trustworthy, but the differences between Romney and Gingrich head to head vs. Obama are telling. For instance, in Ohio, a recent Quinnipiac poll had Romney down only two — but Gingrich down by 14. In December in Colorado, Public Policy Polling showed Obama up only two on Romney, but up eight on Gingrich. A Quinnipiac survey of Virginia showed Romney up 2… and Gingrich down five.

Chart 2 shows the Obama v. Gingrich map, which is, needless to say, a nightmare for Republicans. 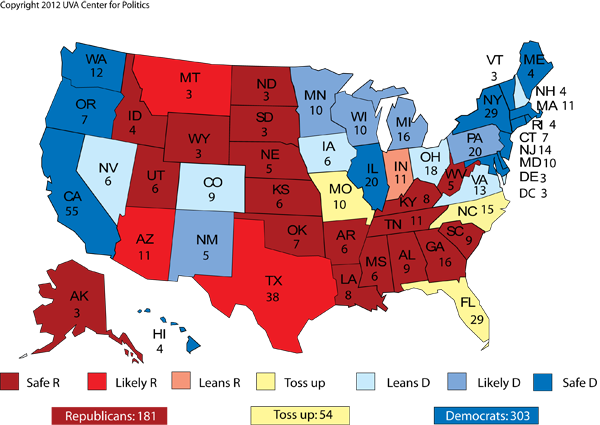 Notice, in particular, how this second map is much bluer in the crucial Midwestern states than the first map. Ohio, perhaps the nation’s key swing state, begins in the leans Democratic column. We also believe Gingrich would have little appeal to Hispanic voters, who are major voting blocs in a number of western swing states. Colorado, Nevada and New Mexico, thus, are more Democratic in this map.

Henry Barbour, nephew of the former Mississippi governor and Republican National Committee Chairman Haley Barbour, drew flak recently for saying that he couldn’t support Gingrich because he said he liked having a Republican speaker of the House; that is, Gingrich would do poorly enough so that Obama’s coattails would elect a Democratic House.

With this map, one can understand his fears. In several Midwestern swing states, Republicans gained many House seats in 2010 that, thanks to their control of redistricting, they sought to lock in through aggressive remapping. Under this map, all of those states — Michigan, Ohio, Pennsylvania and Wisconsin — would be tough territory for Gingrich. If his candidacy were a disaster, those new Republican gerrymanders could unravel. The close battle for the Senate could also be affected — Michigan, Missouri, Montana, Nevada, New Mexico, Ohio and Virginia all have competitive Senate races this year, and all of those states get bluer on our map under a hypothetical Gingrich candidacy.

During debates, Gingrich likes to say that Ronald Reagan was down 30 points to Jimmy Carter in early 1980. He’s correct about that, although Carter, at that point in the race, was getting a sizable poll bounce in the aftermath of the taking of American hostages by the Iranians. Think of it as something like the poll boost George W. Bush got after 9/11 — a rally around the flag effect. By the end of March, Carter’s approval rating was back under 40% after shooting up to nearly 60% — and he led Reagan 40% to 34% in the national Gallup poll, with independent Republican John Anderson taking 21%. As spring melted into summer, and summer into fall, Anderson fell off, and Carter and Reagan fell into essentially a dead heat. Then, when negotiations to free the hostages fell apart the weekend before the election, the bottom fell out for Carter, and Reagan won by 10 points.

Is Gingrich Reagan? Probably not. And the electorate is a lot different and more partisan than it was 30 years ago. And despite Obama’s troubles — he hasn’t had a real polling bounce since Osama bin Laden was killed in the spring — Obama leads Gingrich convincingly in many polls. Much more convincingly than he leads Romney, if he leads him at all.

Of course, this is all highly speculative right now. If circumstances permit — if some unexpected crisis damages Obama, or the economy dips back into recession — Newt Gingrich could be giving his inaugural address roughly one year from now. That’s how important external factors are in deciding the presidential contest.

But don’t doubt for one instant that top Republicans in Washington and across the country haven’t already gamed out their own maps in fearful anticipation of a Gingrich presidential candidacy. And, if Gingrich wins Florida, those same Republicans will be trying to revive Romney or even casting about for a new candidate, however unlikely that scenario may be.