The upcoming battle for the Senate depends to a large extent on the presidential race; Democrats should gain House seats but not truly threaten the GOP’s big lower chamber majority; and Republicans are positioned to add to their already-substantial majority of governorships. That’s the early line on next year’s down-ballot contests as we prepare to turn the calendar from 2015 to 2016. Of course, a lot can and will change with these ratings, particularly as the identity of the Republican presidential nominee becomes clearer (and if something goes seriously amiss for the current Democratic presidential favorite, Hillary Clinton). But here’s where we stand now: 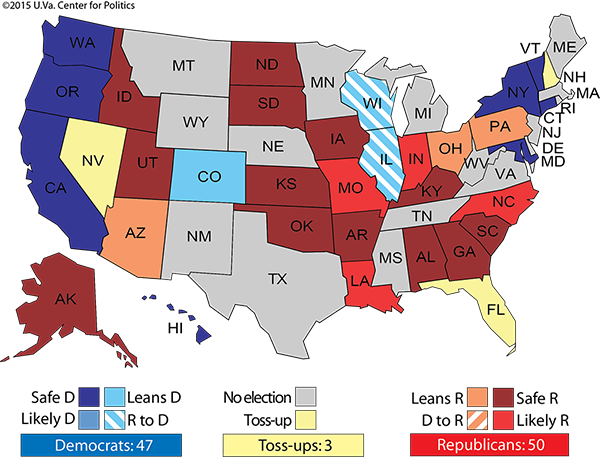 The Republicans currently hold a 54-46 advantage, so they can afford some losses and still maintain their majority. We currently have them as underdogs in two seats they are defending, Illinois and Wisconsin; three other seats — Republican-held Florida and New Hampshire as well as Democratic-held Nevada — are Toss-ups. There are additional Democratic targets, particularly Pennsylvania, which Leans Republican now only because of uncertainty over the strength of the Democratic nominee. Assuming the eventual Democratic standard bearer isn’t damaged beyond repair in what could be an ugly primary, the Keystone State is another good opportunity for Democrats. Ohio potentially is as well, with Arizona, Missouri, and North Carolina as intriguing targets too. Besides Nevada, the only other plausible Republican takeover target is Colorado. Given the crossover between the key presidential states and most of the key Senate races, we suspect the presidential winner will also win at least a narrow majority in the upper chamber. That may seem overly simplistic, but take another look at Map 1: with the exception of Illinois, a safe Democratic state in the presidential race, note the crossover between the most competitive Senate races and the presidential swing states. They largely overlap. Democrats are likely to hold more Senate seats in 2017 than they hold now, but how many more largely depends on the top of the ticket.

We have one small tweak to our Senate ratings: Kentucky moves from Likely Republican to Safe Republican. In the wake of now-Gov. Matt Bevin’s (R) surprisingly strong victory in the state’s gubernatorial race in November, Kentucky appears more Republican than ever. Even though some in the GOP worry that Sen. Rand Paul (R-KY) is paying too much attention to his quixotic presidential bid and is neglecting his duties as a Senate candidate, we just ultimately don’t think that will matter much in the end. Additionally, Paul’s most dangerous prospective opponent — Adam Edelen (D) — surprisingly lost his reelection bid as the state’s auditor and is not going to run for Senate in 2016. 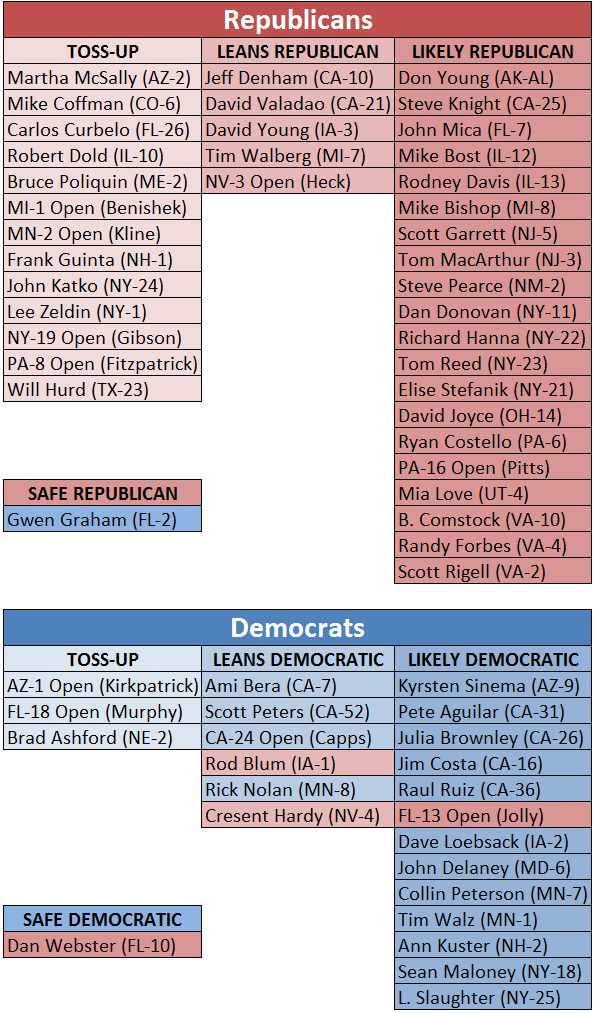 After a series of ratings changes announced last week in response to the new House map in Florida — changes that generally benefited Democrats — our current House ratings show Republicans with 231 seats that are safe, likely, or leaning for them, Democrats with 188 safe/likely/leaning, and 16 Toss-ups. Splitting the Toss-ups down the middle would produce a House of 239 Republicans and 196 Democrats, which would be an eight-seat gain for the Democrats from the current 247-188 Republican-led House (there’s actually one Republican vacancy, the seat of retired Speaker John Boehner, but for the purposes of this exercise we’re assuming the GOP will retain the Safe Republican seat in a special election next year).

An eight-seat gain for the Democrats is not a firm prediction: It’s actually probably a little too bullish for the minority party at this point. However, the Republicans are overextended in the House, so it makes sense that the Democrats could and probably would end up with more seats in 2017 than they hold now, but they are still far away from netting the 30 seats they would need to win the House. We can’t say with 100% certainty that Republicans will hold the House — a poor GOP presidential nominee could lead to a wipeout, as I recently wrote in Politico Magazine — but whatever their chances are they are very close to 100%.

We have one ratings change to announce. Rep. Richard Hanna (R, NY-22) is one of the most centrist Republicans in the House, making him a good general election fit for his Central New York seat, which Mitt Romney won by only about 1,300 votes in 2012. But he will again face a primary challenge from state Assemblywoman Claudia Tenney (R), a conservative who held Hanna to 53.5% of the vote in the 2014 primary despite being vastly outspent. Democrats are still searching for a candidate here — Hanna was unopposed in the 2014 general election — but the threat of Hanna losing a primary makes the race potentially interesting. One other factor: Even if Hanna were to lose the primary, New York’s ballot rules could allow him to advance to the general as the nominee of the Independence Party, potentially setting up a three-way race (or even a situation in which Hanna becomes the de facto Democratic nominee). We’re moving the race from Safe Republican to Likely Republican just to put it on readers’ radar.

We’ll check in with a fuller update on the House after the holidays, during which some members invariably will decide not to run for reelection and some new challengers will emerge. 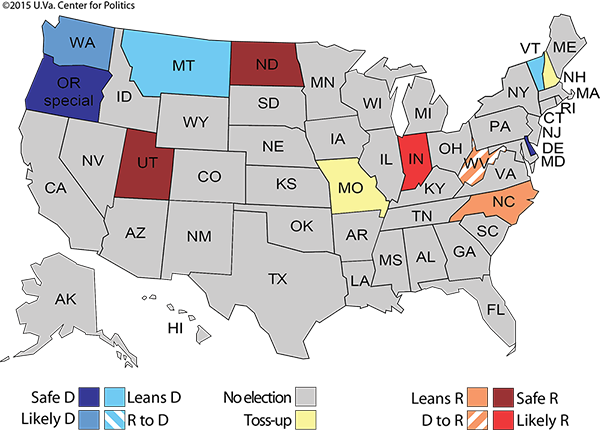 Ultimately, 2015’s three gubernatorial races produced no net change in the nation’s partisan lineup: There were 31 Republicans, 18 Democrats, and one independent (Alaska’s Bill Walker) in the nation’s 50 gubernatorial mansions starting the year, and the lineup will still be the same entering 2016, even though Republicans took Kentucky from the Democrats and Democrats took Louisiana from the Republicans (the GOP easily held Mississippi, the other race).

Republicans probably still are favored to start 2017 with more gubernatorial mansions than they hold now, if only because they have more targets than the Democrats amongst the small number of gubernatorial races being contested next year. Of the 2016 seats, Democrats currently hold eight of the 12. We currently see the Republicans as a small favorite in West Virginia and even money to win Missouri, two states where the GOP presidential nominee should provide coattails. Republicans have very close to 50-50 odds in New Hampshire, another open Democratic seat, and they should be able to run competitive races in Montana and Vermont, which despite its federal Democratic lean is often open to voting Republican for governor. That’s five credible Republican targets. The Democrats, meanwhile, are going to go all-out to try to win North Carolina, and they might have a shot in Indiana as well. The GOP target list is just longer, so their overall outlook is brighter to start. This means that there’s a decent chance Republicans could match or exceed their post-World War II high of 32 governors, which they held prior to the 1970 and 1998 election cycles.

Three races that we don’t see as all that competitive next year are Delaware, North Dakota, and Oregon. While Delaware and North Dakota are open seats, the incumbent party — Democrats in the former, and Republicans in the latter — have held both for nearly a quarter-century, with winning streaks in each that date back to 1992. We do not see either as being in play next year. Meanwhile, unelected incumbent Gov. Kate Brown (D-OR) has generally performed well since taking over for scandal-plagued John Kitzhaber (D) earlier this year, and Republicans don’t seem to be targeting the state. If Brown wins election to Kitzhaber’s unexpired term, she would have to run again for a full term in 2018, when she might be going for a ninth-straight full Democratic term in Salem. While some states are known for quirky, contrarian politics down the ballot, in recent years these states have voted for governor the exact way one would expect given their presidential leanings, and there’s not much indication that will change in 2016.