As Republicans take the stage in Cleveland for their first presidential primary debate tonight — with Donald Trump in the middle of it — one thing is already abundantly clear: A lot of voters are angry. Very angry. In fact, a lot of voters have been angry for some time. The phenomenon that we call “negative partisanship,” antipathy on the part of Democratic and Republican voters toward the opposing party and its leaders, has been on the rise since the 1980s, and today it is arguably the most salient feature of the political scene in the United States. Now voter ire appears to be shaping both parties’ 2016 presidential nomination races. The rise of Trump and Bernie Sanders in the Republican and Democratic nomination contests, respectively, is symptomatic of this increased anger in the American electorate.

Although rising voter anger is clearly affecting both parties, during the Obama years it has been more evident among Republican partisans. Table 1, which utilizes data from the 2012 American National Election Study (ANES), shows the comparison between the parties. In the ANES survey, voters were asked to indicate how often they felt angry at the Democratic and Republican presidential candidates. More than two out of five Republican voters, 43%, reported feeling angry at Barack Obama either “always” or “most of the time.” By contrast, only 33% of Democratic respondents indicated a similar level of anger toward Mitt Romney.

The difference in anger levels between supporters of the two parties in 2012 does not appear to reflect a fundamental difference between Republicans and Democrats. Rather, an incumbent president of either party is simply more likely to inspire strong emotional reactions on the part of voters than a less well-known challenger. Thus, in 2004, when the ANES asked respondents to rate their anger level at President George W. Bush and his Democratic challenger, John Kerry, 60% of Democratic voters indicated that they were angry at Bush either “very often” or “fairly often,” while only 30% of Republican voters were that angry at Kerry.

Table 1: Anger at 2012 presidential candidates among Democratic and Republican voters 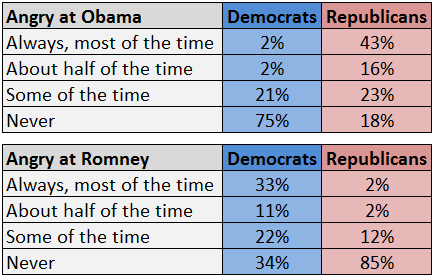 One finding that emerges very clearly from our data is that voter anger during the 2012 general election campaign was directed overwhelmingly at the opposing party. Despite the misgivings they may have had about Mitt Romney and his record as governor of Massachusetts, 85% of Republicans reported that they “never” felt angry at their party’s standard-bearer. Similarly, 75% of Democrats indicated that they were never angry at Obama. Only 2% of Democrats and 2% of Republicans reported that they felt angry at their own party’s presidential candidate either always or most of the time.

What makes partisan anger especially significant is that it is greatest among the most politically engaged and active members of the electorate. An analysis of the 2012 ANES data shows that there was a very strong relationship between political involvement and anger. Using the number of reported campaign activities — voting, canvassing for a candidate, trying to influence someone’s vote choice, donating to a campaign, etc. — as our measure of political involvement, we found that most active partisans were the angriest at the other party’s presidential candidate. Figure 1 displays this relationship. 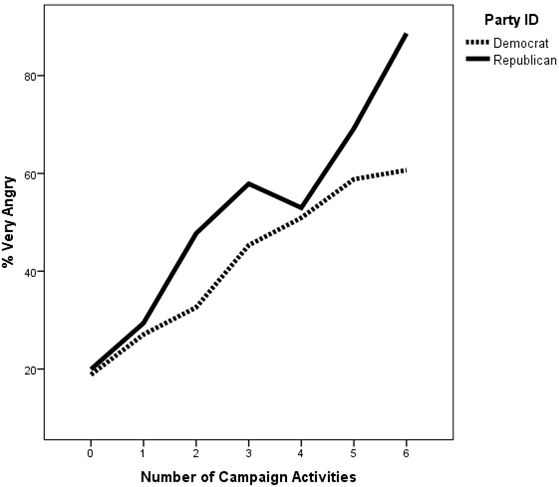 The data in Figure 1 show that at all levels of political engagement Republicans were angrier at President Obama than Democrats were at Mitt Romney. Thus, among the most active Republicans, those who reported engaging in three or more campaign activities, 90% reported feeling angry at President Obama either always or most of the time. Only 60% of Democrats with a similarly high level of political engagement were that angry at Mitt Romney. For both parties, however, the general trend in Figure 1 is very clear: The more individuals participated in campaign activities, the angrier they were at the other party’s presidential candidate. This finding suggests that Democratic and Republican primary voters in 2016 are likely to be drawn disproportionately from the angriest segment of each party’s base and that candidates who can tap into that anger are likely to do well.

Contrary to what many observers of American politics seem to believe, anger among voters is not irrational. To the contrary, our research indicates that voter anger has a clear rational basis. To a large extent, this anger appears to be based on ideological disagreement: the greater the disagreement with the opposing party, the greater the anger. 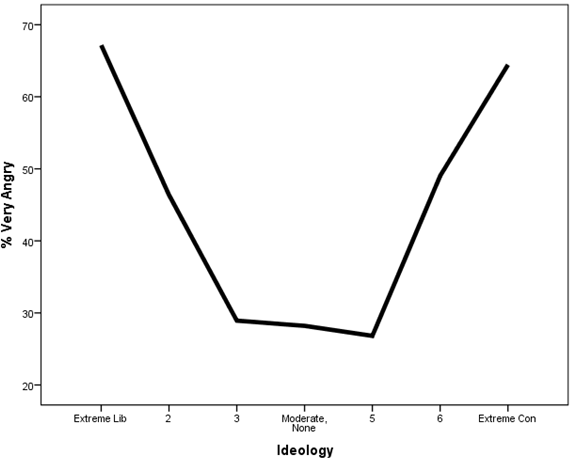 Data from the 2012 ANES shows that ideology was a strong predictor of voter anger: The most ideologically extreme members of the electorate were angriest at the opposing party’s presidential candidate. The results displayed in Figure 2 show that this appears to be equally true for voters at both ends of the ideological spectrum. Thus, among individuals who identified themselves as “extremely liberal,” nearly 70% reported feeling angry at Mitt Romney always or most of the time. Similarly among those identifying themselves as “extremely conservative,” 65% reported feeling angry at President Obama always or most of the time. In contrast, among ideological moderates, anger levels were much lower.

Turning to the 2016 presidential nomination campaigns, we can clearly see the effects of rising voter anger in both parties. Donald Trump’s surge in the polls among Republican primary voters is likely due to his ability to give voice to frustration and anger among a large segment of the GOP base at the failure of Republicans in Congress to reverse the policies of the Obama administration over the past six and a half years. Likewise, Bernie Sanders’ success in closing the gap between himself and Democratic frontrunner Hillary Clinton is probably attributable to his ability to tap into liberal anger over the failure of President Obama and congressional Democrats to overcome Republican opposition to policies such as raising the minimum wage, addressing climate change, and regulating Wall Street.

Despite their early successes, however, Trump and Sanders are still seen as long shots to win their party’s nominations, and the data from 2012 suggest that once the nomination contests have been decided, partisans will redirect their anger at the opposing party and its nominee. What we have seen in recent general elections in the U.S. is that what matters most to voters is not whom you love, but whom you loathe. No matter who wins the Democratic and Republican nominations next year, we can expect anger at the opposing party’s candidate to run high, and we can expect both parties’ nominees to seek to tap into this anger in order to energize and mobilize their supporters. It promises to be a long and nasty campaign.