What’s the outlook for Super Tuesday? A mixed bag of possibilities for GOP presidential candidates Mitt Romney, Rick Santorum, Newt Gingrich, and Ron Paul. Will Romney make a play in the South? Can Paul win a caucus? And what will happen in Ohio, the most crucial contest on March 6? Get our take — and answers to your questions — in the latest Crystal Ball video.

John Bull — the British equivalent of Uncle Sam — was prominently featured on British armed forces recruiting posters during World War I, pointing a finger and asking, “Who’s absent? — Is it you?”

In the case of the Virginia primary, he who is absent is Rick Santorum. And it’s going to cost him, big time, on Super Tuesday.

Because only Mitt Romney and Ron Paul are on the Virginia ballot, Romney — who we expect to sweep the Old Dominion — starts off with a big lead on Super Tuesday courtesy of Virginia. That built-in advantage will make it exceedingly difficult for Santorum to finish the day with more delegates than Romney. In fact, we expect Romney to win more delegates on Super Tuesday than Rick Santorum, probably many more.

Being that this is the Crystal Ball, we’re fearlessly — and, to be sure, recklessly in at least some instances — projecting these 11 contests (10 Super Tuesday states plus Washington on March 3) as well as delegate totals for all four candidates.

Do we expect these numbers to be exact? Of course not. Projecting delegates, as we have noted before, is something of a fool’s errand, especially because some of these states are non-binding caucuses (making their events little more than beauty contests). Our intention here is not to give a precise accounting of the specific — and often very confusing — delegate allocation rules or quibble about a delegate here or a superdelegate there. We’ll leave that to the lawyers in the unlikely case of a contested convention. Rather, we want to provide you, our readers, with a rough guesstimate of how the next 11 contests will turn out and where the candidates will stand in the aftermath of Super Tuesday.

A map showing our predicted winners in the 11 upcoming contests is below (three of the caucuses, Alaska, North Dakota and Washington, are too close to call). Underneath the map, we’ve done a grab-bag, seat-of-the-pants estimate of how many delegates each candidate could win in every contest. There are plenty of caveats — for instance, the Washington and North Dakota caucuses are non-binding, meaning that technically no delegates will be awarded during the voting in those caucuses. 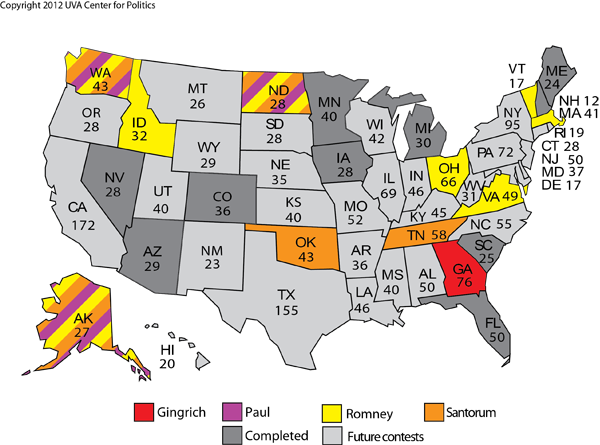 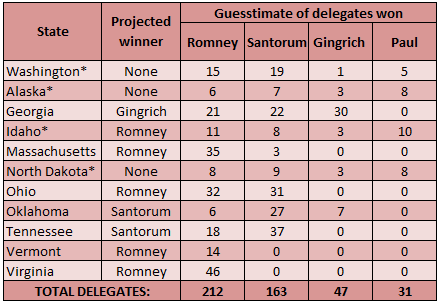 Notes: * Represents caucus states. Washington and North Dakota, as mentioned above, are nonbinding, but delegate estimates are based on our best guesses of how voting would translate to delegate selection, assuming the state party conventions abide by the caucus results. Unpledged party official delegates — essentially Republican “superdelegates” — are not included in Super Tuesday guesstimates. So, for instance, we have Virginia awarding its 46 delegates to Romney, but Virginia actually has 49 delegates. We would assume those three extra delegates would go to Romney too, but they are not included here.

Correction: A previous version of this post listed Wyoming’s caucuses as completed; while a straw poll was completed on Feb. 29, delegates will be awarded from March 6 to 10 and April 14.

Our guesstimate of Romney’s delegate edge — 49 over Santorum — comes almost entirely from Virginia. Subtract out Virginia, and Super Tuesday becomes essentially a draw. Obviously, Romney will do very well in Massachusetts, where he served as governor, and in neighboring Vermont — both of which are Democratic states whose Republicans aren’t particularly religious or conservative compared with other states. Ohio, which will be the key state in Super Tuesday press coverage and which we project Romney will win quite narrowly, is in almost any event likely to be relatively even in delegates, much like Michigan was.

The caucus states are particularly difficult to project, but winning them probably won’t prove to be all that decisive anyway — unless, months from now, this race goes to the convention.

By the way, the more we study the delegate rules, the more we see the leeway that top Republican leaders such as the governor and party chair might have on the later stages of the process, including the selection of superdelegates. This could be a hidden Romney advantage, since the party establishment believes he has the best chance in November. Of course, if Romney falters, this same delegate selection artifact may give a delegate base to “someone else” who enters late or is drafted.

Looking past Super Tuesday, Map 2 shows the remaining GOP primary landscape. Santorum must be sighing with relief that he avoided “another Virginia” by qualifying for the Indiana ballot. Had Santorum not been on the Hoosier ballot, Romney would have been well positioned, but that is much less true now. Indiana has more evangelical Christians than its Midwestern neighbors, which helps account for its more conservative character.

Texas, with a massive 155 delegates, continues to be a giant question mark. The primary there won’t be held until late May, at the earliest, because of an ongoing, bitter redistricting dispute. If Texas had been part of Super Tuesday, as originally planned, it could have provided a major boost for Santorum — or possibly Gingrich, who is strongly supported by former presidential candidate Gov. Rick Perry. 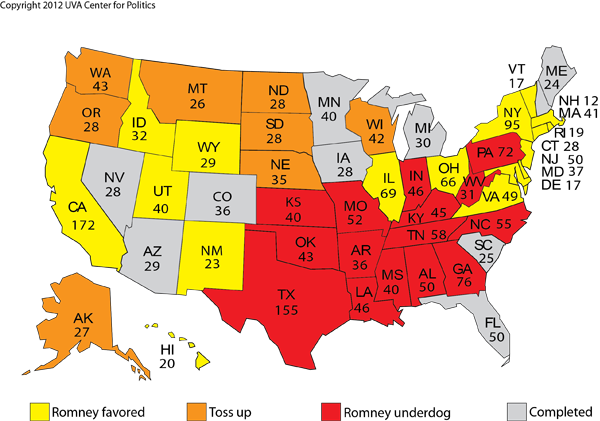 More delegates are at stake in the next week than in the contests held over the past two months. Still, as we have stressed, the Super Tuesday of 2012 is puny compared to 2008’s. In 2008 more than half the convention delegates were picked on that one day, while just a fifth of the 2012 convention will be at stake this March 6. This year, more than half of all delegates will be up for grabs in later contests — another reason why this contest will probably drag on and on. The road to the 2012 GOP nomination is a long one, loaded with potholes for the four remaining candidates.