While usually the realm of sitcoms, game shows and sports, politics became part of the TV ratings discussion during the Republican and Democratic National Conventions. Breathless reports recounted how 35.7 million people watched Barack Obama’s acceptance speech while just 30.2 million tuned in for Mitt Romney’s. And don’t forget, Michelle Obama topped Ann Romney by a score of 26.2 million to 22.3 million.

But do the ratings mean anything?

If we look back at the total ratings for every political convention from 1960 to 2012, it’s quickly apparent that the side whose convention receives the most viewers doesn’t necessarily win. Chart 1 tells the tale. 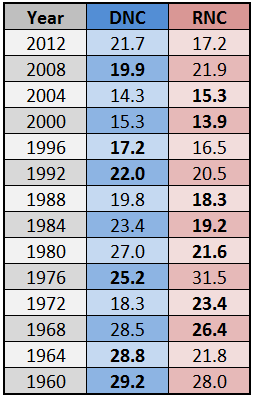 Notes: Ratings represent the percentage of households with televisions watching the convention during primetime hours (click the Nielsen link for more details). Bolded numbers indicate the party that won the election that year.

Out of 13 elections during this period (not including this year), there have been seven where the party whose convention got lower ratings won the election in November. So it’s safe to say that ratings have little to no electoral meaning.

In some cases, it’s easy to explain why the losing party’s convention had higher ratings. The 1968 Democratic National Convention was a giant fiasco, but the massive protests undoubtedly made for gripping television viewing. In the case of 1976, it’s no wonder that the Republican convention drew a record percentage of household viewers: It was the last time a party didn’t know who was going to win the nomination going into a convention. The drama of Gerald Ford, the incumbent president, taking on the conservative intraparty challenger Ronald Reagan surely helps explain the high ratings. But all the attention didn’t matter in the end: Jimmy Carter edged Ford in November. Most recently, the RNC outdrew the DNC in 2008, which ought to surprise some people considering the symbolic nature of Obama’s candidacy. Still, Sarah Palin was a huge hit and viewership for John McCain’s acceptance speech narrowly edged Obama’s.

So if TV ratings have no predictive value, do they really have anything to tell us? Actually, yes, if we delve into who watched what. Charts 2 and 3 show the viewership numbers for the major networks and cable channels during the RNC and DNC.

Notes: Figures are for viewers during the 10 to 11 p.m. (primetime) coverage period. NBC did not show coverage of Day 2 of the Democratic National Convention because it was showing the NFL season opener.

During the GOP convention, it should come as no surprise that Fox News dominated the airwaves. Over the convention’s three days, Fox averaged nearly twice as many viewers as any of the other channels listed. But during the Democratic convention, Fox finished last among all stations in viewership. Fox’s ideological competitor, MSNBC, finished dead last during the RNC in viewership, but finished in a respectable third in average viewership behind its parent, NBC, and CNN.

These figures indicate that Republicans paid more attention to the Republican convention (as indicated by Fox’s high ratings), while Democrats accounted for more viewers during the DNC (because of Fox’s falloff compared with MSNBC’s ratings boost). That certainly lends credence to the argument that many convention viewers just tuned in to root for their respective teams.