Based on the election calendar, white evangelical Christians are going to receive ample attention early in the 2016 Republican primary. Using exit poll data from the 2012 and 2008 GOP primaries, as well as data from the Census Bureau and the Public Religion Research Institute’s American Values Atlas to help estimate numbers for states with no exit polls, we found that about two-thirds (64%) of the total delegates in states with contests on or before March 8 will come from states with electorates that may be at least 50% white evangelical.

Table 1 lays out delegate data based on white evangelical participation and the calendar. Of the nearly 2,500 Republican delegates, just over 1,000 will come from the states and territories that will hold presidential preference polls up through March 8, 2016. Of those, close to 700 are slated to represent states that could have electorates with majorities of white born-again Christian voters, who are generally more conservative than other Republicans and less inclined to support establishment-oriented candidates.

Notes: “Other” covers the five states and territories (American Samoa, Colorado, Guam, North Dakota, and Wyoming) that will not hold presidential preference votes in 2016. They will bind their delegates either at conventions later on or leave them entirely unbound. Also note that some states and territories will not bind their three Republican National Committee delegates by the primary or caucus results.

There will be 24 binding primaries and caucuses from Feb. 1 (the Iowa caucus) through March 8 (primaries in Idaho, Michigan, and Mississippi, plus a caucus in Hawaii). Exit poll data and our estimates suggest that 12 of these GOP electorates may be at least 50% white evangelical. Map 1 color codes the states according to the size of their white evangelical electorates (polled or estimated) in primaries and caucuses; below the map, Table 2 lays out the nomination calendar in the chronological order the contests are held with white evangelical and Republican delegate data for each state and territory.

Map 1: Size of white evangelical electorates by state in Republican primaries and caucuses 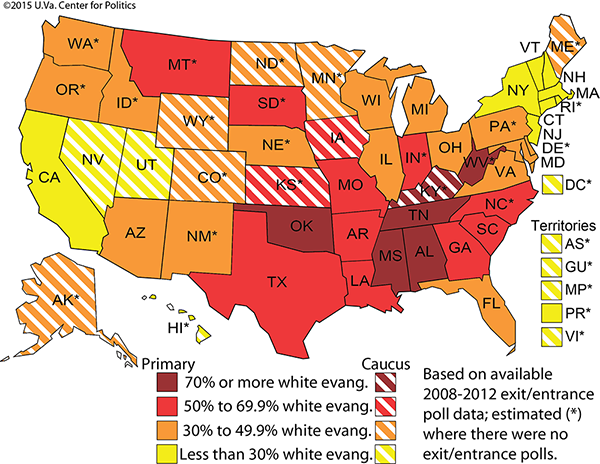 Data notes: White evangelical percentages based on 2008-2012 exit and entrance poll data for Republican primaries and caucuses. Estimated data derived from equation based on a linear regression model of the available states’ exit poll data on white evangelical participation regressed on those states’ overall white evangelical population and their overall non-Hispanic white population. Estimates should be treated with caution but are presented to give a general picture of white evangelical voters’ role in GOP nomination process. The model explains 93% of the variation in the data.

State notes: “P” indicates a state or territory will use a primary, “C” indicates a caucus or a convention. *Alaska Republicans will hold what is essentially a firehouse primary, but it is commonly denoted as a caucus to differentiate it from a standard primary. Kentucky Republicans will hold a caucus in 2016 after previously using a primary. Depending on the outcome in Louisiana’s gubernatorial runoff election on Nov. 21, 2015, the Bayou State will either have 46 or 47 GOP delegates. Missouri Republicans held a nonbinding primary and caucus in 2012 but will hold a binding primary in 2016. Utah Republicans will use a caucus in 2016 after employing a primary in 2012. Washington Republicans will use a primary to decide its entire delegate allocation in 2016. Indicated by (NP) in Table 2, American Samoa, Colorado, Guam, North Dakota, and Wyoming will not hold presidential preference votes in 2016, opting to bind their delegates either at conventions later on or leave them entirely unbound. Indicated by “N/A,” we didn’t estimate the territories, but given their demographics they have at most very small white evangelical populations.

White evangelicals: A key cog in the GOP base

Since the rise of the Moral Majority and related political movements in the late 1970s and early 1980s, white evangelical Christians have been an influential bloc within the American polity. Today, it is an overwhelmingly Republican constituency: Mitt Romney carried white born-again Christians 78%-21% over Barack Obama in the 2012 general election — the same margin as George W. Bush in 2004. And Romney did this despite the fact that some white evangelicals voiced reticence about supporting a member of the Church of Jesus Christ of Latter-Day Saints, to which Romney belongs.

But Romney’s religious affiliation, along with his political positions, likely affected his performance during the 2012 Republican primary. Consider that cycle’s Iowa caucus: Romney edged Ron Paul by 12 points among the 44% of caucus-goers who said they weren’t white evangelicals. But he wound up narrowly losing the overall contest by 34 votes — after some delay in the counting — to Rick Santorum, who won 32% of the 56% of Hawkeye State Republicans who said they were white evangelicals. Romney struggled in many other states with high percentages of white evangelicals in the Republican electorate. For example, he did not win any primaries in the Deep South as white born-again Christians aided the efforts of Santorum and Newt Gingrich. The former Pennsylvania senator and former speaker of the House won 10 of the 18 states that we project to have at least 50% white evangelical electorates, but the pair only won 3 of the 38 other state or territorial contests. In the end Romney won the nomination, but in the primary he encountered opposition from more socially conservative voters, many of whom were white evangelicals.

Many observers have framed the 2016 Republican nomination contest as a multilane highway, looking at the candidates’ ideology, insider-versus-outsider status, and/or early state focus. As the race has developed, more and more there appears to be an Iowa lane and a New Hampshire lane, though some candidates — such as Marco Rubio — defy easy categorization. Still, on the Iowa side of the dotted line, the importance of the state’s white evangelical voters is paramount. Candidates such as Ben Carson, who now leads most polling there, as well as Ted Cruz, Mike Huckabee, Bobby Jindal, and Santorum are particularly gunning to win over born-again Christian conservatives in the Hawkeye State. There might be concern about all of these candidates splitting the white evangelical vote too many ways and allowing a more establishment-flavored candidate to win, but there are still so many candidates in the field that it’s possible that this might end up being more of a problem in the New Hampshire lane.

Carson and Cruz, having more resources and support in the polls than the other Iowa-focused conservatives, are already looking ahead to later contests in other white evangelical-heavy states. Recent national and state polls that have evangelical crosstabs show Carson leading among born-again voters, and he’s trying to build beyond that in the South by running a rap-themed ad in urban radio markets to target black voters. Meanwhile, Cruz has long regarded the March 1 “SEC Primary” (a reference to the NCAA’s Southeastern Conference) as a vital part of his victory strategy, partly through his appeal to Christian conservatives. After all, the Texas senator announced his presidential run at Liberty University — a huge evangelical Christian educational institution founded by Rev. Jerry Falwell of Moral Majority fame — in Virginia, a state that votes that day. Cruz’s home state of Texas, which also has a heavy white evangelical vote, is another March 1 state.

All this is to say that white evangelical Christians are going to impact the 2016 Republican nomination contest, just as they have in previous cycles. However, while at first blush the early weight of these voters might suggest outsized influence on the overall outcome, proportional delegate rules could make it difficult for a non-establishment, socially conservative candidate to win the party’s nomination.

That is, states holding primaries or caucuses before March 15 will apportion their delegates proportionally, while some states holding contests on or after that date will have winner-take-all primaries or thresholds that could trigger winner-take-all provisions. Notably, Florida and Ohio — which have decently-sized white evangelical electorates but not over 50% — will hand their winners (or winner) all of their delegates on March 15.

Fully 71% of the delegates from states with 50% or more white evangelical electorates will have their delegations determined by proportional rules of some kind before March 8. Some of these contests will have winner-take-all triggers, but the field may still be too crowded to activate them. Conversely, 81% of the delegates determined after March 8 will come from states with less than 50% white evangelical electorates. As shown in Table 1, 57% of convention delegates are apportioned after March 8 (either in elections or at state conventions).

This is not to say that a white evangelical-oriented outsider candidate won’t win the Republican nomination. But many states with large numbers of conservative born-again Christians will vote when many candidates may still be in the race, possibly splintering their delegate hauls. Nonetheless, if the white evangelical Iowa lane of the field winnows a great deal between now and March 1, it’s possible that someone could take advantage and rack up a solid delegate take. Only time will tell, but there’s little question that white evangelical Christians are going to be an important factor in determining the GOP nominee, particularly in the early going.