Conventional wisdom is that the Republican presidential field is set, and that it is much too late for a new candidate to enter the race.

In years past, that would be absolutely correct. Over the last few decades, dozens of primaries and caucuses have been shoe-horned into the opening weeks of the election year, with the tendency on the Republican side for the front-running candidate to score a quick knockout.

But next year, the arrangement of the primary calendar is much different. It is less condensed at the front, much more loaded with events at the back, with the prospect of a viable, late-starting candidate quite real.

This is not to say that it will happen, but simply to note that it could. Such a scenario could not have unfolded in 2008, when the early January events were followed in short order by an early February Super Tuesday vote-fest that involved nearly half the country.

But the elongated layout of the nominating calendar this time provides the opportunity for a late-starting candidate to emerge. Should Mitt Romney stumble badly in the January events in Iowa, New Hampshire, South Carolina and Florida, another establishment Republican could enter the race in early February and still compete directly in states with at least 1,200 of the 2,282 or so GOP delegates. Many of them will be up for grabs after April 1 when statewide winner-take-all is possible.

Similarly, should non-Romney alternatives led by Newt Gingrich, Michele Bachmann and Rick Perry fall flat in the January contests, there would be time for the conservative wing of the party to find a new champion to carry its banner through the bulk of the primary season.

In some respects, the layout of the 2012 primary calendar resembles that in 1976, starting in the dead of winter with events in Iowa and New Hampshire and building to a crescendo with California in early June. That year, President Gerald Ford and former California Gov. Ronald Reagan battled delegate for delegate until Ford prevailed at the convention that summer in Kansas City. It was the most closely contested and longest-running Republican nominating contest in the last 40 years.

On the Democratic side, the “back-loaded” arrangement of the primary calendar encouraged two late entries in 1976, Gov. Jerry Brown of California and Sen. Frank Church of Idaho. Each won several spring-time primaries. But they mounted their campaigns too late to offset former Georgia Gov. Jimmy Carter’s long lead in the delegate count.

Eight years earlier, Sen. Robert Kennedy of New York was a far more successful late starter. He entered the Democratic race after the New Hampshire primary and proceeded to run off a series of high-profile primary victories, culminating with a winner-take-all triumph in California in early June. Had he not been shot the night of his California victory, Kennedy might have gone on to wrest the nomination from Vice President Hubert Humphrey. As it is, Kennedy’s unfinished campaign is one of American history’s more intriguing “what ifs.” 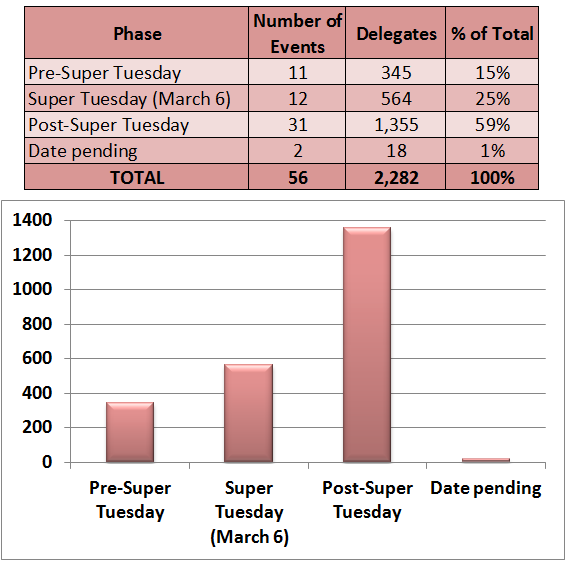 Note: The number of events includes primaries or caucuses scheduled in states and territories, as well as Puerto Rico and the District of Columbia. As of Nov. 21, dates were still pending for events in Guam and the Northern Mariana Islands, each with nine delegates.

To be successful, a late-starting campaign needs to feature a candidate with considerable fund-raising and organizational ability who is capable of quickly grabbing national attention. Charisma helps, as does a campaign message that can evoke widespread support. Robert Kennedy fit the bill in 1968, and there are arguably a few prominent Republicans on the sidelines this time who could mount a competitive, late-starting candidacy in 2012. These could include one of the establishment non-candidates who Republican elites pressured to enter the race earlier this year, such as Indiana Gov. Mitch Daniels, Rep. Paul Ryan (WI), ex-Florida Gov. Jeb Bush or New Jersey Gov. Chris Christie (although Christie has already endorsed Mitt Romney). The entry of any of these Republicans would cause waves, and because of their high profiles they would have little trouble raising money or attracting establishment support. On the other hand, if Romney gets off to a strong start in January’s opening round, then there might be pressure on the right to enlist former Alaska Gov. Sarah Palin to pick up the anti-establishment baton.

The long intermission next February — there are no primaries selecting delegates between Florida on Jan. 31 and Arizona and Michigan on Feb. 28 — provides a natural opening for major changes in the Republican nominating contest to take place. It gives time for active candidates to reassess their campaigns and for prospective candidates to make their move.

The main problem calendar-wise for late-starting candidates is there is often a lag time of two to three months between a primary filing deadline and the primary election itself. As a result, a candidate that jumped into the race early next February would still be too late to get his or her name on the ballot in all the primaries through early April, roughly 20 states in all. In these states, a late starter would have to be creative — “adopting” the Uncommitted line, for instance, in states where they are listed or mounting write-in campaigns in states where they are permitted.

But a late-starting candidate would be able to compete in caucus states immediately, where filing deadlines are rarely an issue. There will be fully a dozen states, plus territories, that will be holding their caucuses from Feb. 4 on. They will be offering a total of roughly 450 delegates.

And a candidate that entered the Republican contest in the wake of the Florida primary would be able to enter at least 15 primaries from April 24 on. It is a number that includes delegate-rich New York and Pennsylvania on April 24, Indiana and North Carolina on May 8, California and New Jersey on June 5 and Ohio on June 12. Taken together, this late array of primaries offers roughly 800 delegates, many of them to be awarded on a winner-take-all basis.

In addition, candidates that fall by the wayside as the primaries unfold often release their delegates, providing another significant pool for late-starting candidates to woo.

In short, the “new look” Republican nominating schedule for 2012 offers scenarios that the “front-loaded” calendars of the recent past could not. The likelihood of the usual quick knockout is reduced, while the prospect of a long slog for delegates is enhanced. And who knows, the latter could feature a late-starting candidate or two, adding another unique twist to a Republican presidential nominating campaign that has already displayed considerable fluidity.

Chart 2: 2012 From January to June: 2012 Republican caucuses and primaries 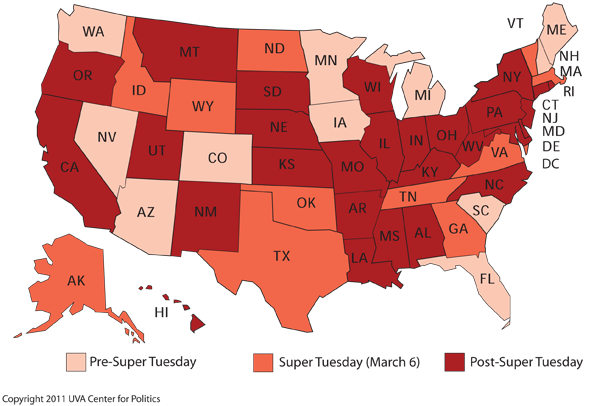 Note: The delegate counts for the five pre-Super Tuesday primary states have been reduced by 50% to reflect their penalty for violating Republican calendar timing rules. In some states, delegates are elected on different dates by different methods, and in each state and territory three delegates slots are reserved for members of the Republican National Committee. But for the sake of simplicity, all delegates are listed on the date of the state’s primary or first-round caucus action. Ohio is currently scheduled to hold its presidential primary June 12 with a March 14 filing deadline. However, there is a chance that the state legislature could reschedule the event for March 6, in which case the filing deadline was Dec. 7.

Sources: Delegate totals are from the Republican National Committee. Presidential primary and caucus dates as well as primary filing deadlines are primarily from the Federal Election Commission. Both the delegate totals and presidential primary and caucus dates are subject to small changes. Dates of non-binding primaries, such as the Feb. 7 contest in Missouri, are not included.