KEY POINT FROM THIS ARTICLE

This is not the best of times for the Democratic Party. No White House; no Senate; no House of Representatives; and a clear minority of governorships and state legislatures in their possession. Yet the Democrats approach this fall’s midterm elections with an advantage in one key aspect of the political process — their strength in states where voters register by party.

Altogether, there are 31 states (plus the District of Columbia) with party registration; in the others, such as Virginia, voters register without reference to party. Among the party registration states are some of the nation’s most populous: California, New York, Florida, North Carolina, Pennsylvania, New Jersey, Arizona, and Massachusetts. 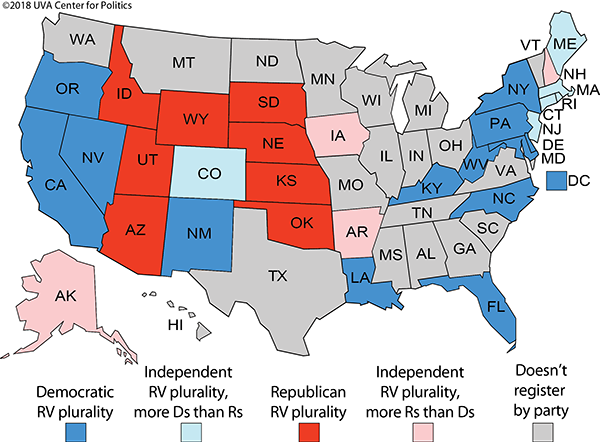 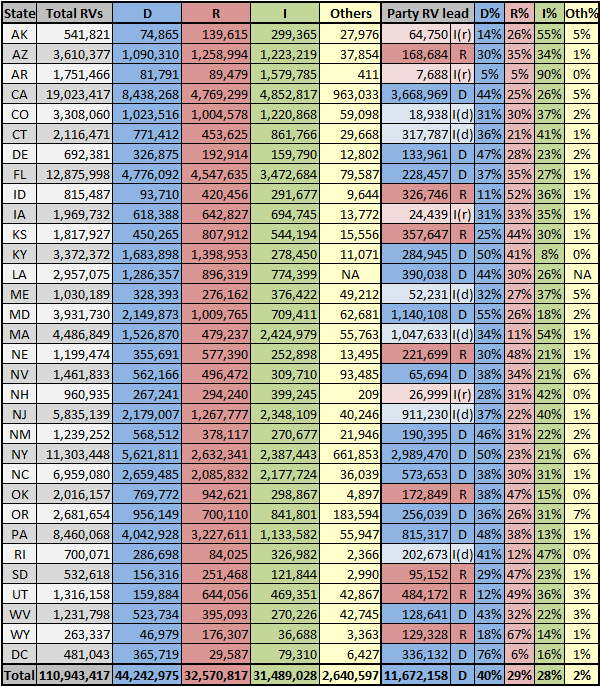 Notes: In states such as Arizona, Colorado, Connecticut, Iowa, Maine, Nevada, New York, Rhode Island, South Dakota, and Utah, the total number of active and inactive voters are presented on the state election website, but only the number of active registered voters is used in this article. The “other” column includes voters registered with third parties. Percentages do not always add to 100 due to rounding. Zero percent (0%) indicates less than 0.5%. “NA” indicates there were no numbers in this category.

At this point, it might be wise to pause and ask the question: Why do these numbers matter, either individually or in the aggregate?

Certainly there are facts that argue that they should be taken with a grain or two of salt. Most party registration states are found in more Democratic terrain: the Northeast (11 states plus the District of Columbia) and the West (10 states), followed by the South (six states) and the Midwest (four states), all of the latter rural states west of the Mississippi River.

Comparing party registration totals between states at a particular point in time can be a bit misleading, particularly because some may have recently completed a purge of “dead wood” on their rolls while others have not. Often, the trend line over a series of years is more valuable to look at than a one-time registration count.

States can also differ on how they report active versus inactive voters. Basically, the latter have not voted in several consecutive elections and have not responded to the efforts of election officials to reach them, though they are generally allowed to show up and vote if they have not moved. Some states fold in active with inactive voters to produce one grand total. A few states break the two categories out separately, where the number of active voters routinely dwarf the number of inactive voters, sometimes by a ratio in excess of 10 to 1. (This article uses only state totals of active voters, wherever possible.)

And there is some sentiment that a voter’s party identification may mean less than it once did, as the number of individuals who register as “Independent” (or “No Party Preference,” “Unaffiliated,” or whatever other nom de plume the individual states prefer) steadily grows. At the beginning of this century, barely 20% of all voters in party registration states were independents. Nowadays, that total is approaching 30%.

With the growth in independents, many voters seem to be saying to the two major parties: “a pox on both your houses.” 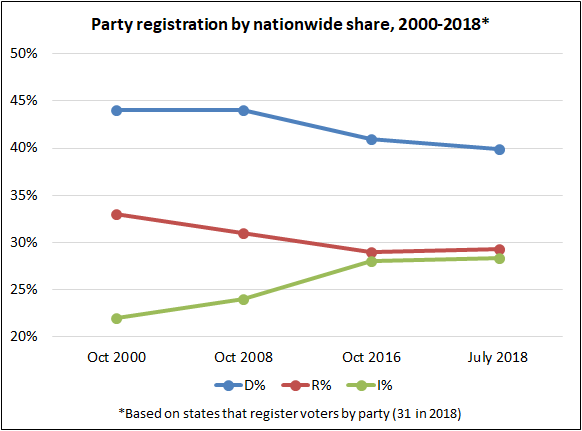 Note: Based on active registered voters in states where the number of active and inactive registrants is listed. In the election-eve 2000, 2008, and 2016 entries, “Independents” include a comparatively small number of registered miscellaneous voters who do not fit into a particular category. Percentages do not add to 100 since the small percentage of registered third party voters is not included.

Even though Democrats began losing their dominance in the South a half century ago, they still retain a registration advantage in four of six Southern states where voters register by party: Florida, Kentucky, Louisiana, and North Carolina.

In Arkansas, there is a rudimentary system of party registration in which there are a few more Republicans than Democrats, but a vast majority of voters do not identify with either party. In Oklahoma, one of the reddest of states over the last few decades, the party registration advantage did not finally flip from Democratic to Republican until a few years ago during Barack Obama’s presidency. (Oklahoma is the only state this century where the registration advantage has switched between parties and the Republican lead is likely to hold for the long term. In battleground states such as Colorado, Iowa, and Nevada, the registration advantage has switched at least once between parties since 2000 and has less of a look of permanence.)

It is an open question as to why other party registration states in the South have not also flipped to the Republicans. For years, they have been regularly voting for GOP candidates up and down the ballot, including 2016 when the whole region except Virginia went for Trump. White southerners who once registered en masse for the Democrats have been dying off for years. And the time when voters registered Democratic because its primary was tantamount to election is long gone. Still, in booming states such as Florida and North Carolina, an influx of outsiders registering Democratic could be helping the party fend off a large GOP registration surge that would flip the states to the Republicans.

As it is, Republicans have been steadily whittling away at the Democrats’ registration advantage in the Southern party registration states. In Florida, the GOP deficit is now less than 230,000 registered voters after being nearly 660,000 in October 2008. In North Carolina, Republicans trail by less than 575,000 registered voters, after being down by 865,000 a decade ago; while in Kentucky and Louisiana, the GOP registration deficit nowadays is below 300,000 and 400,000 registrants, respectively, less than half of what it was in each state on the eve of the 2000 election. 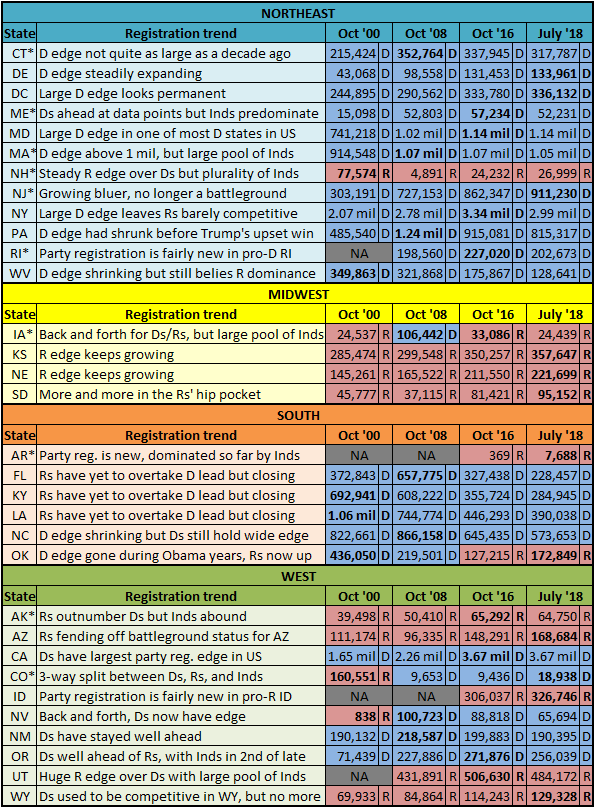 In the rest of the country, there was much more consistency between party registration totals and the 2016 election outcome, with only three non-Southern states voting “against the grain.” On election eve in Pennsylvania, there were 915,081 more registered Democrats than Republicans; Trump carried the state by 44,292 votes. In West Virginia, there were 175,867 more registered Democrats; Trump won by 300,577 votes. And in New Hampshire, there were 24,232 more registered Republicans than Democrats in the fall of 2016, but Hillary Clinton took the state by 2,736 votes. That’s it. The other 22 party registration states outside the South were carried in the presidential balloting by the party with more registered voters than the other.

And in many of these “in sync” states, the registration advantage in recent years has grown more Republican or Democratic as the case may be, augmented by a healthy increase in independents.

The registration trend line in California is a microcosm of sorts of party registration in the nation as whole. Democrats are running ahead and the ranks of the independents are growing. Yet registered voters in both parties appear to be widely engaged. That was the case in 2016, and likely will be again in 2018, with Trump flogging issues to rouse his base. In short, this is a highly partisan era when party registration totals, and the trends that go with them, are well worth watching.

Map 2 and Table 4: Party registration and the 2016 presidential vote 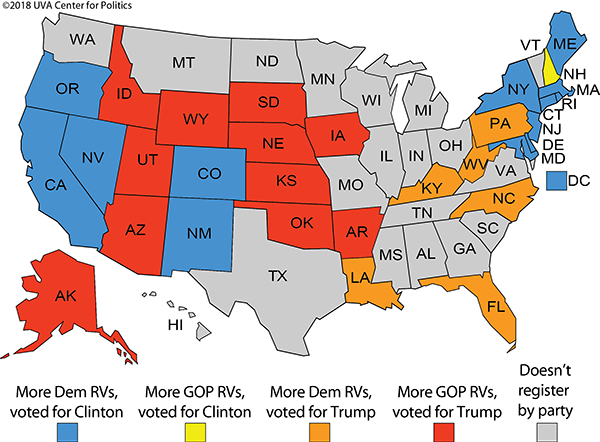 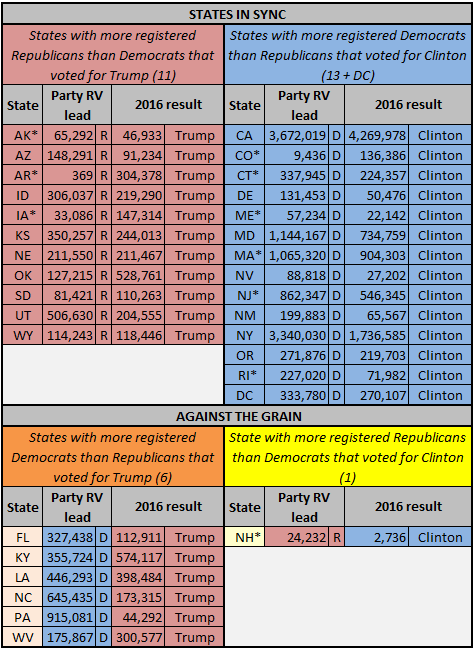 Notes: An asterisk (*) indicates states where there were more registered independents than either Democrats or Republicans in October 2016. “Independents” include a comparatively small number of registered miscellaneous voters who do not fit into any particular category.