After Tuesday’s contests in Delaware, Massachusetts, New Hampshire, and Rhode Island, primary season is essentially over. Only Louisiana remains, but it is in a class by itself with a unique “jungle primary” that takes place on what is general Election Day for every other state. Nothing is ever simple when compiling election stats, and we want to thank the Pelican State for that.

We thought it would be useful to compare how incumbents performed in the 2014 primary cycle with the last two midterm cycles, 2006 and 2010. The Crystal Ball spends a lot of time talking about incumbency, and for a good reason: Empirical data have shown repeatedly that incumbency is immensely helpful to a candidate’s election prospects, whether in primaries or general elections. This year’s primary season was no exception.

Incumbents in the House

As we’ve discussed previously, this cycle has proven far from unkind for incumbents. Of the 387 incumbents seeking renomination outside of Louisiana, 383 (99.0%) won it, with Reps. Kerry Bentivolio (R, MI-11), Eric Cantor (R, VA-7), Ralph Hall (R, TX-4), and John Tierney (D, MA-6) being the only losers. This outcome mirrored 2010, which saw 395 of the 399 (99.0%) House incumbents successfully win renomination, though fewer incumbents sought renomination this cycle than in the last two midterms. In 2006, 406 of 408 (99.5%) won renomination, an even higher success rate. After the Nov. 4, 2014, outcome in Louisiana, it’s possible that Rep. Vance McAllister (R, LA-5), the “kissing congressman,” could join the list of those who lost renomination if he fails to at least get to the state’s Dec. 6 runoff, but that remains to be seen. 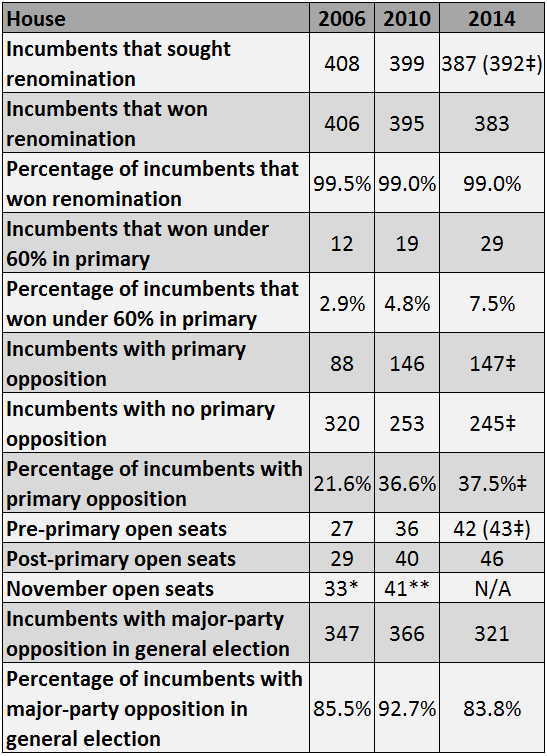 Notes: 2014 figures do not include Louisiana unless denoted with ‡. Louisiana holds its primary election the same day as the November general election. If a candidate wins a majority of the vote in the Louisiana primary, that candidate is elected; otherwise, the top-two finishers advance to a Dec. 6 runoff. *In 2006, four House members who won renomination did not run in November: Rep. Lane Evans (D-IL) opted to retire instead while Reps. Tom DeLay (R-TX), Mark Foley (R-FL), and Bob Ney (R-OH) all resigned from office. **In 2010, two weeks after winning renomination (with under 60%), Rep. Mark Souder (R-IN) announced his resignation on May 18, 2010, after admitting to having an affair with a staff member, creating a vacancy that wasn’t filled until November.

A principal takeaway is the varying percentage of incumbents winning under 60%. While incumbents’ overall winning percentage in 2014 primaries was once again very impressive, there has been a noticeable uptick in the number of competitive primaries in the House. Aaron Blake of the Washington Post noted this trend back in June, and the final 2014 data only confirm it: In 2006, just 2.9% of House incumbents won less than 60% of the vote in a primary; that figure increased to 4.8% in 2010, and grew to 7.5% in 2014.*

Incumbents in the Senate

Unlike 2006 or 2010, not a single senator seeking renomination lost in his or her primary in 2014. Of course, there were close calls, such as the razor-thin victories by Sens. Thad Cochran (R-MS) and Brian Schatz (D-HI). By comparison, Senate primaries were downright explosive in 2010 as three incumbents lost renomination: Sen. Bob Bennett (R-UT) failed to make it out of the GOP convention to the Beehive State’s primary election; Sen. Arlen Specter (D-PA) lost his new party’s banner to then-Rep. Joe Sestak (D); and Sen. Lisa Murkowski (R-AK) lost to Tea Party activist Joe Miller (R), though she successfully ran as a write-in candidate in November. Also, 2006 saw Sen. Joe Lieberman (D-CT), once his party’s vice presidential nominee, lose renomination to Ned Lamont but win as an independent candidate in November. 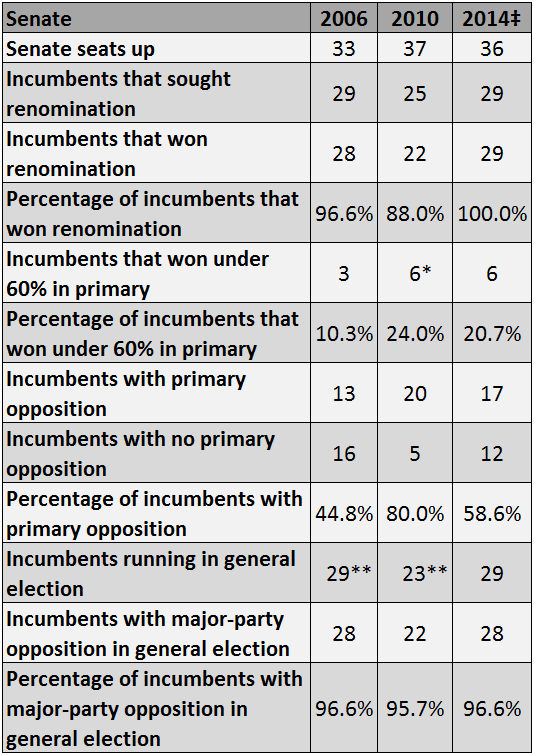 Notes: ‡2014 data assume Sen. Mary Landrieu (D-LA) will finish first among Democrats in Louisiana’s general primary on Nov. 4 and will receive more than 60% of Democratic votes. *Includes former Sen. Bob Bennett (R-UT), who finished third at the Utah GOP convention in 2010 and did not make it to the actual primary election. Now-Sen. Mike Lee (R-UT) went on to win that primary. **In 2006, Sen. Joe Lieberman (D-CT) lost renomination but ran as an independent in the general election, which he won. In 2010, Sen. Lisa Murkowski (R-AK) lost renomination but ran as a write-in candidate in the general election, which she won.

Just 17 of 29 (58.6%) incumbent senators faced primary opposition in 2014, a much lower percentage than in 2010 (80.0%), but still quite a bit higher than in 2006 (44.8%). That is partly a function of the number of incumbents running: Given the power of incumbency, the more incumbents that run, the larger the number one would expect to have no primary challengers. In 2010, despite having 37 races (34 regular Class 3 elections and three special elections), just 25 contests featured incumbents, whereas in 2014, 29 of 36 races (33 regular Class 2 elections and three specials) feature incumbents.

In November, 28 of the 29 (96.6%) incumbents will face major-party opposition, with only Sen. Jeff Sessions (R-AL) going unopposed. Interestingly, it’s the first time in Alabama history that Democrats failed to field a candidate in a U.S. Senate contest. In terms of major-party opposition, the 2014 cycle is actually identical to 2006 but lower than 2010 (22 of 23, 95.7%).

Although no incumbent lost in the Senate this cycle, 2014 continued the trend of increased competition in primaries seen in 2010. While 2010 saw more senators face actual opposition, both cycles saw six members win less than 60% (if we include Utah’s Bob Bennett in 2010, who didn’t even make it out of the state’s GOP convention to the primary).

Correction: The original version of this piece mistakenly stated that Sen. Chris Coons (D-DE) had no major-party opposition in November. He will actually face businessman Kevin Wade (R) in the general election.