There is a growing sense among political observers that the United States may be heading toward a wave election in 2018. Results of recent special elections, including Doug Jones’ (D) victory in the Alabama Senate race on Tuesday, along with Democratic victories in the New Jersey and Virginia gubernatorial elections and surprisingly large Democratic gains in the Virginia House of Delegates all point toward the likelihood of substantial Democratic gains in next year’s midterm elections, including a real possibility that Democrats could regain control of the U.S. House of Representatives. In addition, results of recent generic ballot polling generally show large Democratic leads.

Despite these signs of an impending Democratic wave, however, many political experts believe that the way House district lines in many key states were drawn by Republicans prior to the 2012 election will make it difficult for Democrats to gain enough seats to take back control of the House. According to this argument, Republican gerrymandering was so effective that Democrats would need to win the national popular vote by a very large margin, perhaps eight points or more, in order to gain at least the 24 seats needed to take back the House.

In order to test this argument and evaluate how large a margin Democrats would need in the popular vote to win a majority of House seats, I conducted a regression analysis of the impact of the Democratic share of the major party vote on the number of Democratic seats in the House for all 36 House elections between 1946 and 2016. In addition to the Democratic share of the national popular vote, I included one additional predictor of the number of Democratic seats — a dummy variable indicating whether the election occurred before or after the 2011 round of redistricting in which Republicans enjoyed complete control of the process in many key states including Florida, Michigan, Ohio, Pennsylvania, Virginia, and Wisconsin. The results of the regression analysis are presented in Table 1.

Table 1: The impact of Democratic vote share on Democratic seats in U.S. House of Representatives, 1946-2016 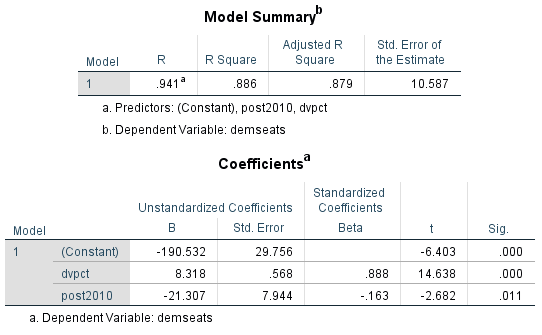 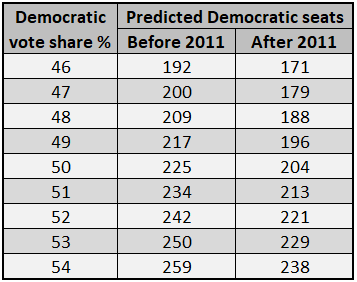 The impact of Republican gerrymandering on the number of Democratic seats in the House can be seen very clearly in Table 2. This table compares the number of expected Democratic seats before and after 2011 based on Democrats winning between 46% and 54% of the vote. Based on these results, it is substantially more difficult today for Democrats to win a majority of House seats than it was before 2011. Specifically, Democrats now need to win almost 52% of the national vote in order to win 218 seats compared with just over 49% of the national vote prior to 2011. These results help to explain why Democrats fell well short of regaining control of the House in 2012 despite winning 50.6% of the major-party vote.

It clearly is more difficult now for Democrats to win a majority of seats in the House than it was before 2011. Contrary to what some political observers have claimed, however, they do not need to win the popular vote by a landslide or near-landslide margin in order to regain control of the lower chamber. Based on the results in Table 2, a popular vote margin of between three and four points would be large enough for this purpose. So what are the chances of Democrats winning the popular vote by this large a margin in 2018?

In order to answer this question, we can make use of a simple but accurate model for forecasting the Democratic share of the popular vote for the House of Representatives. This model uses three predictors of the Democratic vote share: the Democratic margin on the generic ballot, whether the election is a midterm with a Republican or a Democratic president, and the number of seats held by Democrats prior to the election. The estimates for this model are displayed in Table 3. 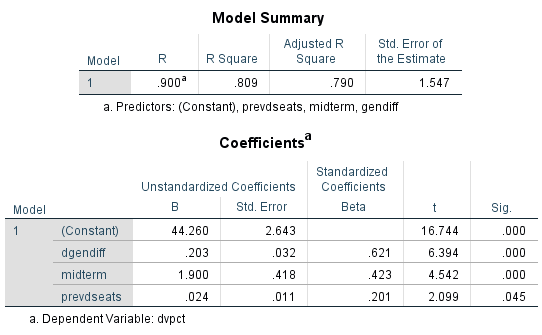 This simple forecasting model explains about 80% of the variance in the Democratic share of the major-party vote for the U.S. House in 36 elections between 1946 and 2016. The strongest predictor of the Democratic vote share is the generic ballot margin. According to these results, for every one-point increase in margin on the generic ballot, Democrats can expect to receive an additional 0.2% of the vote. There is also a strong effect for the party of the president in midterm elections. Even after controlling for the generic ballot, Democrats can expect to win an additional 1.9% of the vote when there is a Republican in the White House and to lose an additional 1.9% of the vote when there is a Democrat in the White House. That is equivalent to gaining or losing about 15 additional seats in the House. Finally, the number of seats Democrats hold going into an election has a modest impact on the number of seats they can expect to win. However, this incumbency effect appears to be much weaker than that of the other two predictors. 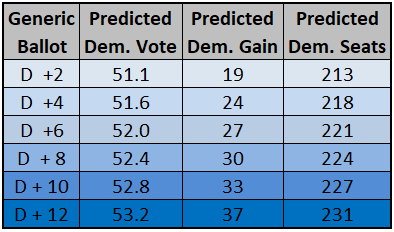 Based on the results in Table 3, we can estimate the share of the national vote and, therefore, the number of House seats Democrats would be expected to win depending on the Democratic margin on the generic ballot in early September of 2018. Those results are presented in Table 4. According to the data in this table, Democrats will need a margin of at least four points on the generic ballot in order to win a majority of seats in the House in the 2018 midterm election. In recent weeks, Democrats have been averaging a lead of between eight and 10 points according to RealClearPolitics. According to the results in Table 4, that large a lead on the generic ballot would predict a popular vote margin of around five points and a gain of between 30 and 33 seats in the House — enough to give Democrats a modest but clear majority.