What a night! Tuesday night’s Iowa caucuses got the Republican primary season off to a rousing start, with Mitt Romney winning the narrowest of victories over Rick Santorum.

What do the Iowa results mean, and what should we expect in New Hampshire? Check out our first-ever Crystal Ball video to get our take. And with next week’s New Hampshire primary looming, we’ll be back next week with another video. Remember to tweet us your questions next Tuesday — and, to the many who tweeted @LarrySabato on caucus night, check out the video to see if your question was selected:

Surprisingly, an eight-vote victory is not the most closely contested presidential nominating contest in recent memory — Barack Obama beat Hillary Clinton by a mere seven votes in the Guam caucuses in 2008. And there have been many other close calls over the years.

There are three big winners from the Iowa caucuses. The first, and most important, is Mitt Romney, who was lucky enough to get two finalists he is very likely to beat. The second big winner is Rick Santorum, who could have easily been left for dead in the cornfields of Iowa but instead has at least a few more weeks of life. The third and most durable winner is the Iowa caucus, an institution that might have expired had Ron Paul gotten a few thousand more votes. A Paul victory would have given future Republican candidates an automatic pass to skip Iowa.

Looking forward, there is almost no one who believes Paul will be the GOP nominee for president, and his continuing candidacy helps to drain a sizable percentage of votes that might otherwise go to an anti-Romney candidate. Santorum has little money and few troops, as well as little structure to campaign in the other 49 states. Maybe he can raise some money and attract more troops because of his showing in Iowa, but so far this year candidates who have attempted an instant presidential campaign (i.e., Newt Gingrich, Rick Perry and Herman Cain) have all imploded. Advantage: Romney.

You can tell that Romney knows he’s in an enviable position because he is beginning to pivot to a general election campaign in which he attacks Barack Obama and not his Republican rivals — leaving the latter task mainly to his Super PAC.

The expectations for Romney are sky high in New Hampshire, which is his main danger. Santorum moved up so late in Iowa that he has not yet had the media scrutiny or negative advertising that other candidates such as Newt Gingrich have endured. That will now change. The media frenzy lifted Santorum in Iowa but it may crash him against granite in New Hampshire.

Santorum is bound to get a bump in the polls but it is unlikely to be a huge one — in other words, not large enough to overtake Romney. The field is still divided. Gingrich and Paul will take perhaps 20% or more combined in New Hampshire; Santorum and Jon Huntsman, the forgotten man in this race thanks to his skipping Iowa, will take another chunk. That potentially leaves a lot of votes for Romney. Keep in mind too: Entrance polling in Iowa showed that GOP caucus-goers were, just like four years ago, very conservative — about three in five were born-again or evangelical Christians. These voters dominated the caucuses, but they won’t dominate New Hampshire; in 2008, they made up just about one in five Republican primary voters there. This is, of course, a big advantage for Romney.

One other advantage for Romney is that New Hampshire is happening so quickly after Iowa — just one week later. The quick turnaround from Iowa to New Hampshire is the new norm, but, as illustrated in Chart 1, in 1980 there was more than a month between Iowa and New Hampshire. That allowed Ronald Reagan, who surprisingly lost Iowa to George H.W. Bush, to reset that race by clobbering Bush in the Granite State. With such little time, can Santorum and the others significantly cut into Romney’s big polling lead? It’s not likely, but it’s not impossible either, particularly with two debates this weekend. 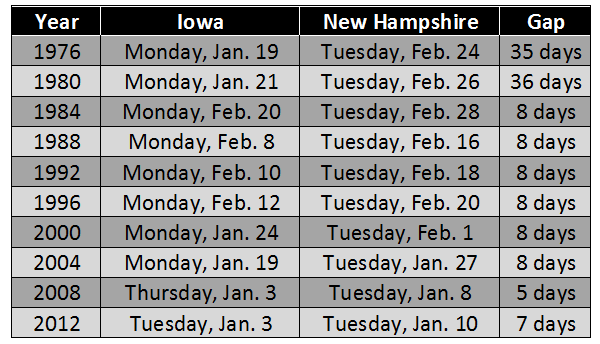 Moving down the line, it is South Carolina where Romney could potentially get in trouble. But the evangelical-heavy Palmetto State, despite its Iowa-like Republican conservatism, may be susceptible to momentum generated from New Hampshire as well as its desire to maintain its perfect record of selecting the eventual Republican nominee since 1980. That could ultimately benefit Romney.

The grand finale of January will be Florida. This is where Romney’s detailed preparation, large war chest and extensive organization will be quite useful to him as he seeks the ultimate January victory. Of course, if Romney is defeated in any of these upcoming contests, then the Republican nominating battle could go on for months.

The basic general election calculus remains the same, as only Romney appears to be a fully credible candidate against Barack Obama. Santorum, like Gingrich, Cain, Perry and Bachmann before him, will get ample scrutiny. That includes a vetting of his unapologetic brand of social conservatism and, perhaps more importantly, his 17-point Pennsylvania Senate reelection shellacking in 2006. Going back to 1994, when Santorum was first elected to the Senate, only one incumbent — Sen. Blanche Lincoln (D-AR) — suffered a larger setback in a reelection bid than Santorum did when he lost to now-Sen. Bob Casey (D-PA). The recent history of the Senate incumbents who have lost since 1994 is detailed in Chart 2. 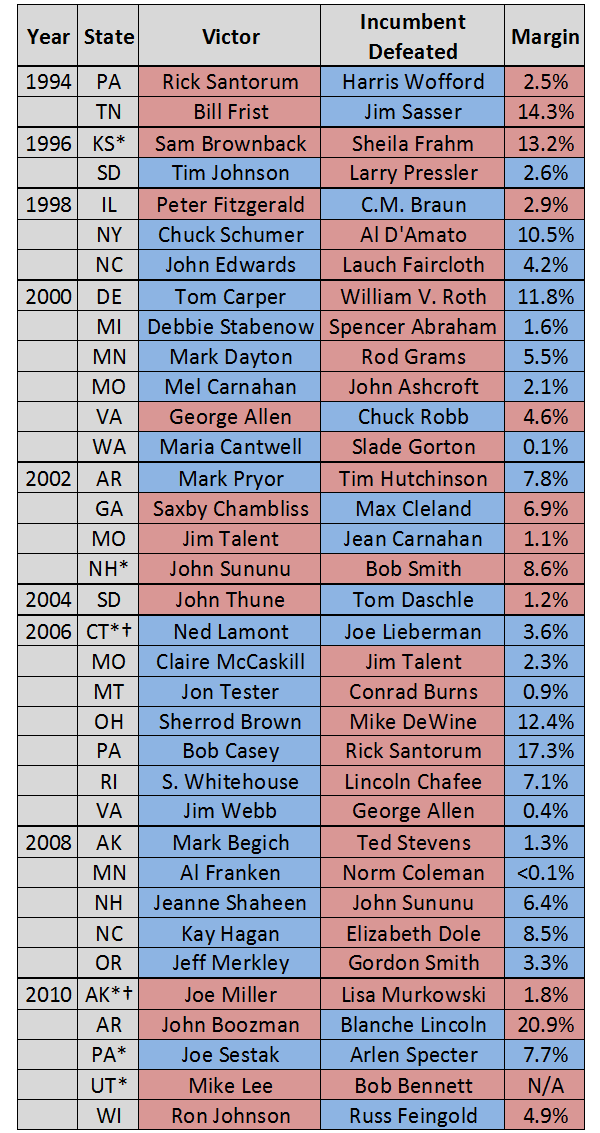 Notes: *Primary/convention election; †Defeated incumbent then ran as independent and won general election; N/A – Incumbent Bob Bennett was defeated in a convention before he could compete in the Republican primary.

This weekend’s debates will be fascinating. The field is now one candidate smaller — Michele Bachmann, after her mighty fall from effectively first to worst between the Iowa Straw Poll in August and the actual caucuses, has bowed out. Perry staggers on to South Carolina; can he rebound there? He’s shown few signs of life since his debate gaffes dragged down his once-high poll numbers, and whatever votes he does get are not likely to come from Romney’s column. He reportedly has several million dollars left to spend, which is not insignificant.

Romney remains the frontrunner, but he has so far avoided the kind of direct attacks that frontrunners often receive. That may change, especially if Newt Gingrich’s concession speech in Iowa is any indication. Gingrich may stay in the race just to try to bring down Romney, who in both his runs for president has elicited a remarkable amount of enmity from his opponents.

Given his disappointing performance there four years ago and the makeup of its Republican electorate, Iowa was always a major hurdle for Romney on his path to his party’s nomination. It appears as though he has cleared it, but his path to the nomination is not yet completely clear.