As we enter the dog days of Congress’ August recess, Americans are displeased with Washington. For instance, a recent poll found that 82% of Americans don’t think Congress has earned its break. Americans’ unhappiness with their leaders spares no branch of government: President Obama has seen his disapproval rating eclipse his approval rating since early June, and Congress has an approval rating in the teens. Even the Supreme Court has suffered to some degree.

But while Congress has been unpopular since what seems like the beginning of time, Obama, as recently as earlier this year, basked in an approval rating in the low-to-mid 50s, which is decent in our polarized political era. However, the president seems now to be suffering from a case of the “second-term blahs.” Obama is the sixth of eight second-term presidents (counting Harry Truman and Lyndon Johnson, who served partial first terms after their predecessors died in office) in the modern age of polling to enter such a period. Most of the afflicted presidents saw their approval ratings permanently deteriorate, which may be a bad omen for Obama. Those who didn’t recover usually suffered because of a poor economy, scandal or war.

Gallup’s comprehensive polling — which can be explored at the pollster’s Presidential Approval Center — starts with Harry Truman, and he suffered a major case of second-term blahs. After his stunning, upset election win in 1948, Truman saw his approval rating slip below 50% in January 1950, as shown in Chart 1. It would never recover.

Truman’s decline initially came because of trouble on the domestic front. The economy had steadily worsened throughout 1949. That year, the nation’s GDP shrank three of four quarters while the unemployment rate rose from 4% at the end of 1948 to 6.6% by the end of 1949. While the economy would improve markedly the following year (explaining some of Truman’s slight upswings), the Korean War began in June 1950, creating a whole new set of challenges for the sitting president. After United Nations forces won some early successes, the communist Chinese invasion in November 1950 eventually led to the war becoming a bloody stalemate. This crippled Truman’s approval rating for good. His approval in October 1950 was 41%, poor enough to contribute to the electoral atmosphere that cost Democrats 29 House seats and six Senate seats in the 1950 midterm election. After he relieved Gen. Douglas MacArthur of his command in April 1951, Truman’s approval stood at 24%. It would only recover to a high of 33% a month before his successor, Dwight Eisenhower, was elected.

While Truman suffered the second-term blahs because of a turbulent combination of economic and foreign policy trouble, Eisenhower never experienced the same. As shown in Chart 2, the World War II hero rarely saw his approval dip below 50%, never falling lower than 48%. Ike’s job approval was Teflon despite the 1958 recession that had ugly ramifications for congressional Republicans in that year’s midterm election. Eisenhower’s party had two difficult midterms during his presidency, which showed how the president was judged differently than his party by the public.

Serving out the remainder of John F. Kennedy’s term, Lyndon Johnson used the Kennedy legacy, his own political will and a weak Republican presidential opponent to claim massive political and policy victories in 1964-65. Johnson’s approval rating stood at 70% a couple weeks after winning in a landslide over Barry Goldwater, and his standing with the American people remained relatively strong until the late summer of 1966, when (as shown in Chart 3) LBJ’s approval became mired in the 40s as the economy slowed and the news from Southeast Asia worsened. Like Truman, Johnson’s “blahs” had electoral repercussions: In November 1966, Johnson’s party lost 47 House seats and four Senate seats.

It only got worse for Johnson in 1967. That summer saw race riots in major cities such as Newark and Detroit and anti-war sentiment grew substantially. By October 1967, Johnson’s approval had fallen to 38%. Despite a momentary recovery at the beginning of 1968, LBJ’s approval again fell in response to the Tet Offensive launched at the end of January by the Viet Cong and North Vietnamese. The military morass in Vietnam proved Johnson’s undoing. With his approval at 36%, Johnson announced that he would not run again after barely winning his party’s primary in New Hampshire. Removed from politics and promising a full focus on peace talks, Johnson’s approval jumped to 50% in the next Gallup survey. But little progress in Vietnam and more domestic turmoil (assassinations, riots and mass protests) quickly depressed Johnson’s popularity through the November election.

Richard Nixon had one of history’s worst cases of the second-term “blahs.” At the start of his second term, with the Vietnam War finally at an end, Nixon’s approval rating reached a high of 67%, but it fell quickly to 48% by late April 1973, as shown in Chart 4. At that point, the Watergate scandal began to explode and the economy began to struggle, actually shrinking during the third quarter of 1973. By early August 1973, Nixon’s approval had fallen to 31%. When he resigned in early August 1974, Nixon sat at a Truman-esque 24%.

Of the presidents who served two terms and suffered from second-term blahs, only Ronald Reagan saw his approval rating permanently recover. Reagan’s problems began just after the 1986 midterm election, when news of the Iran-Contra affair broke. As shown in Chart 5, the president’s approval fell from a pre-election mark of 63% to 47% just after the first revelations of the scandal. By mid-March 1987, Reagan’s approval reached its second-term nadir, 43%, as the president took full responsibility for the scandal in a TV address. But Reagan avoided further deterioration; no investigation found the president had knowledge of the full scope of the Iran-Contra arrangement. From its low point, Reagan’s approval rating slowly recovered. The improving economic data surely helped. The unemployment rate decreased from 6.6% in March 1987 to 5.7% a year later, finishing 1988 at 5.3%. Despite his second-term troubles, Reagan’s lowest approval rating came during his first term amidst economic strife in early 1983.

Despite his personal scandals, Bill Clinton is the only president in this analysis besides Eisenhower who suffered no major second-term approval decline — a remarkable reality given the Lewinsky scandal and the lying that accompanied it. As shown in Chart 6, his second-term approval rating never fell below the late May 1999 mark of 53%. Besides the overreach of congressional Republicans in seeking his impeachment (rather than merely censuring him), Clinton was buoyed by a vibrant economy and low unemployment rate, which was at 3.9% by December 2000 near the end of his time in office. Similar to Reagan, Clinton’s worst approval marks came in his first term.

In the case of George W. Bush, we can use RealClearPolitics’ aggregated average of all approval polling to get a more detailed picture of the 43rd president’s second-term swoon. Below, Chart 7 illustrates that Bush’s net approval fell permanently into negative territory in May 2005. While the economy was improving at a fair rate during the first half of Bush’s second term, with an average GDP growth of 2.6% per quarter in 2005-2006, the unpopular Iraq War and the mismanagement of the response to Hurricane Katrina ate away at Bush’s approval, which was never especially high after his reelection. Once the economy began to fall apart in 2008, Bush’s approval approached the lows seen by Truman and Nixon. 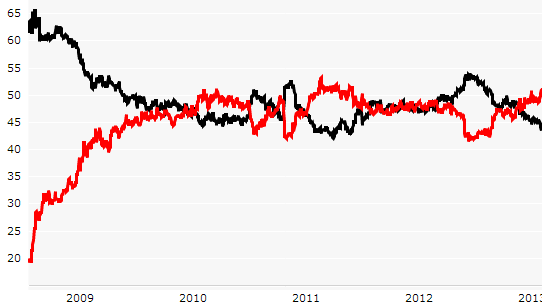 As shown above, today Obama’s aggregate approval in RealClearPolitics’ average is about 44% while his disapproval is about 51%, indicating a further decline for the president since he fell back into the negative in June. But the small sample size of two-term presidents (or semi-two term, in the cases of Truman and Johnson) means that the incumbent is not necessarily doomed to the kind of permanent deterioration seen by many of his predecessors. Still, there is little question that the upcoming fights over the future of Obamacare, the budget, the debt ceiling and immigration will sorely test Obama. The lack of meaningful action in Washington and the ugly clashes that are on the way may drag Obama down the same road as Truman, Johnson, Nixon and the younger Bush. On the other hand, the absence of a stalemated war and the possibility of continued (if slow) economic improvement may allow Obama to escape their path and tread one more similar to Ronald Reagan. In this polarized, partisan era, Obama will benefit from continued intense backing by Democrats and minority voters; his ceiling isn’t fixed, but Obama’s floor is relatively high.