Every reelection campaign is different because every president and the circumstances of each election are diverse. Barack Obama’s challenges are more unusual than most, but so are his advantages.

Obviously, the problems for Obama are mostly economic. Below, Chart 1 shows the 11 presidents who have run for reelection since World War II and their key economic statistics — second quarter GDP growth and August unemployment figures — at this point in the race. 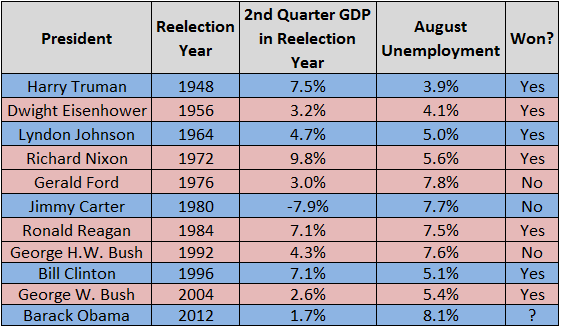 It is immediately apparent that Obama’s task isn’t easy. Although other incumbents have had it worse — the economies under Herbert Hoover in 1932 and Jimmy Carter in 1980 were basket cases, leading both to landslide defeats — a low growth rate plus high unemployment make the president quite vulnerable.

Since 1948, only Carter’s glaring -7.9% slump was worse than Obama’s 1.7% GDP growth rate in the second quarter. What should be even more disconcerting for Obama is the fact that two incumbent presidents with higher second quarter GDP growth figures have failed to win reelection.

Both Gerald Ford in 1976 and George H.W. Bush in 1992 had to run with tepid economies, but in many ways their situations were better than the one Obama has now: both had lower unemployment rates and higher rates of second quarter GDP growth. So why did they lose? Other factors came into play. Ford had the burden of Watergate, and his pardon of Richard Nixon hurt him badly; a debate gaffe about Poland being free of Soviet domination also slowed his forward momentum for 10 critical days. The elder Bush had to cope with Ross Perot. While in the end Perot’s 19% was fairly split between potential Bush backers and Clinton supporters, Perot had gone after Bush tooth and nail for most of the election year — and it showed in Bush’s favorability ratings. The end of the Cold War, lessening the importance of foreign policy experience, probably played a role in Clinton’s success, too.

Obama also faces the highest August unemployment rate of any president seeking reelection in the post-World War II era. But that has not proven fatal, as his high-40s average approval rating remains persistently durable. Given the closeness of the polls, many voters are backing the president in spite of the economic situation. Every economic report between now and Election Day will be closely monitored and will surely impact the decisions of some voters, perhaps even the sliver of true independents and undecideds — the ones that might decide a very close contest.

Fortunately for Obama, there are other statistics that might decide the course of this election. It is possible that the key number on Election Day won’t be the unemployment rate but rather what percentage of the electorate is nonwhite. In 2008 more than one in four voters was nonwhite (26%, according to exit polls). Given that about four out of five nonwhite voters are likely to cast a ballot for Obama, the voter turnout of African Americans, Latinos, Asian Americans and other minority groups is incredibly important to the outcome on Nov. 6. If the percentage of nonwhite voters beats the 26% mark from 2008, Obama will be nicely positioned to win reelection. At the same time, if Obama cannot garner at least 40% of the white vote (he won 43% of it last time), his chances could diminish. (Some analysts believe Obama can fall as low as 38% among whites as long as there is a very robust minority turnout, so we’ll see.)

Also boosting Obama is the exact polarization and partisanship that he has often criticized (and, Republicans say, has contributed to). The locked-in electorate on both sides gives the incumbent a floor of support that’s much higher than Carter’s, who struggled even with his own party.

Obama can only wish that he had the broad personal appeal of President Eisenhower in 1956; or the solid economy and invincible Kennedy legacy of new President Lyndon Johnson in 1964; or the booming economies enjoyed by President Reagan in 1984 and President Clinton in 1996, with identical 7.1% second quarter GDP growth rates. It would have been difficult for any of these chief executives to lose, no matter the opponent, but the incumbents were also blessed with weak opponents — retreads (Adlai Stevenson, Walter Mondale), an out-of-the mainstream foe (Barry Goldwater), or a candidate with poor campaign skills (Bob Dole). Democrats hope Mitt Romney is another Dole, but the economic conditions are almost opposite.

It is no accident that Democrats keep comparing Obama to President George W. Bush in 2004. This is a convenient comparison for them to make because Bush won. The evaluation is valid in some respects. Bush, like Obama, was a polarizing president with a polarized electorate, and he managed to win reelection in a divisive election in 2004 with a second quarter GDP growth figure not too far above that of Obama’s. Obama, also like Bush, seems to have the edge on foreign policy matters — but the key difference is that this election (so far) has very little to do with foreign policy.

If the campaign doesn’t go well for President Obama, and the jobs reports continue to be lackluster, there’s always one more incumbent role model he can invoke: President Harry Truman in 1948. That year, the common wisdom said that Thomas Dewey would crush Truman, and even Truman’s wife Bess was gloomy about his chances. But the economy turned up just in time, and “Give ‘em Hell, Harry” also benefited from a Republican nominee who couldn’t emote. Dewey was termed “the little man on the wedding cake” (possibly by Teddy Roosevelt’s daughter Alice Roosevelt Longworth, though that’s debated), and his assumed presidency ended in the wee hours of election night when, to the astonishment of everybody but Truman, the incumbent won a new four-year lease on the White House.

Still, no incumbent wants to depend on the Truman example. He’s the patron saint of underdogs, having been prayed to publicly by every candidate on his way to defeat since ‘48.

There may be parallels in history, but no exact duplicates. Under unique optics, encumbrances, and opportunities, President Obama will have to make his own special brand of history if he is to win a second term.