Straw polls, real polls, debates, caucuses and primaries — these comprise the public side of presidential campaigns 14 months before Election Day. But behind the scenes, strategists for President Obama and his major Republican opponents are already focused like a laser on the Electoral College.

The emerging general election contest gives every sign of being highly competitive, unlike 2008. Of course, at this point in 1983 and 1995, Ronald Reagan and Bill Clinton, respectively, were in trouble; and in 1991 George H.W. Bush still looked safe. Unexpectedly strong economic growth could make Obama’s reelection path much easier than it currently looks to be. So could the nomination of a damaged candidate by the Republicans. On the other hand, a few more months like the preceding couple, and Obama’s reelection trajectory will resemble Jimmy Carter’s.

These possibilities aside, both parties are sensibly planning for a close election. For all the talk about what Hispanics will do or how young people will vote, the private chatter is about which party column the vital swing states will favor. It’s always the Electoral College math that matters most.

George Mason supported an Electoral College because “…it would be as unnatural to refer the choice of a proper character for chief Magistrate to the people, as it would, to refer a trial of colours to a blind man.” The Electoral College has survived only because it has evolved into the converse of Mason’s vision. The people in each state judge presidential character, decide the ballots cast by electors and — blindly or not — choose the colors that cloak the states on election night, either Republican Red or Democratic Blue.

More than a year out, it is a simple task to shade in most of the map of the United States for November 2012. Voting is inertial for well over half the states: objects in motion tend to remain in motion.

Barring a Carter-like collapse, President Obama is assured of 175 electoral votes from 12 deep-blue states and the District of Columbia: California (55 electoral votes), Connecticut (7), Delaware (3), Hawaii (4), Illinois (20), Maryland (10), Massachusetts (11), New Jersey (14), New York (29), Rhode Island (4), Vermont (3), Washington (12) and Washington, D.C. (3). Three more states are not quite as certain, but still likely Democratic: Maine (4), Minnesota (10) and Oregon (7). Even though Minnesota is competitive enough to vote Republican under the right set of conditions, it is the state with the longest Democratic presidential streak, dating to 1976.

Four other states usually end up Democratic for president, but the margins can vary considerably from year to year: Michigan (16), New Mexico (5), Pennsylvania (20 and Wisconsin (10). A low Hispanic vote in 2012 could flip New Mexico; Al Gore carried it by only 366 votes in 2000 and a concerted effort by George W. Bush flipped it in 2004. Deep-seated economic problems might cause Michigan to reconsider its party ties. Narrowly Democratic in 2000 and 2004, Wisconsin is a cauldron of unpredictable countertrends. Pennsylvania has frustrated all GOP attempts to win it over since 1988, yet recent polls have shown new weakness for Obama here. These 51 electoral votes will be GOP targets if conditions in the fall of 2012 approximate today’s.

The Obama forces have bravely boasted that they can turn Arizona (11), Georgia (16) and Texas (38), mainly because of growing Latino vote power. After Democrats’ surprise victories in states such as Florida and Virginia in 2008, one shouldn’t reject these assertions out of hand. Still, with the economy in the tank, electoral claims on these big three will likely go the way of John McCain’s early declaration in ‘08 that California was within his grasp. Count another 65 Red votes here.

Four years ago even many optimistic Democrats didn’t really believe they would pick up Indiana (11), North Carolina (15) or an Omaha electoral vote in Nebraska, which like Maine awards one vote per congressional district. All three went for Obama by small margins. Indiana is very likely to desert Obama next time, as is the Cornhusker district, barring another big Obama victory. The Democrats chose Charlotte for their national convention, and they will make a big play to keep the Tar Heel state. As of now, that looks tough. Thus, Republicans lead for 26 more electors. Missouri was the sole squeaker that went for McCain; few believe it will be tight next year, and the GOP has those 10 votes, too.

So Republicans are a lock or lead in 24 states for 206 electoral votes, and Democrats have or lead in 19 states for 247 electoral votes. Seven super-swing states with 85 electors will determine which party gets to the 270 Electoral College majority: Colorado (9), Florida (29), Iowa (6), Nevada (6), New Hampshire (4), Ohio (18) and Virginia (13). Prior to Obama’s 2008 victories in each state, several of these toss-ups had generally or firmly leaned Republican for most elections since 1980. Virginia, which hadn’t voted Democratic since 1964, was the biggest surprise, and its Obama majority was larger than that of Ohio, which has frequently been friendly to Democrats in modern times. Massive Hispanic participation turned Colorado and Nevada to Obama, and it helped him in Florida. New Hampshire was the only state lost by Al Gore that switched to John Kerry; its special New England character makes it especially volatile. 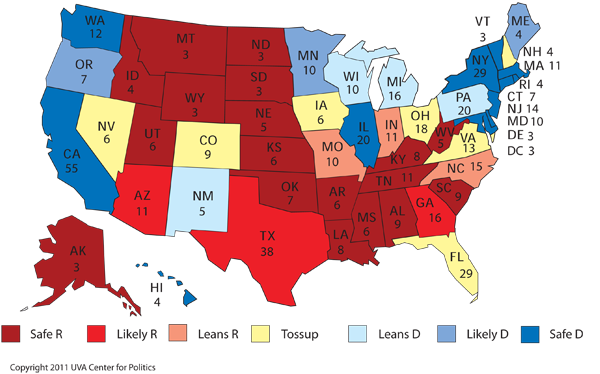 The flip side of the early predictability of states is how little difference the identity of the eventual Republican nominee makes, if you restrict the choice to the three who are arguably most electable, all current or former governors: Mitt Romney, Rick Perry and Jon Huntsman (who is very unlikely to win the nomination). Romney’s familial ties in Michigan could make him more competitive than others there, and in the Granite State as well, since voters became familiar with him during his gubernatorial term in Massachusetts. As a Southerner, Perry might be able to quickly secure a region that tends to vote for one of its own. New Mexico would be a next-door neighborhood target for Perry, too, just as it was for Bush in ’04. Huntsman’s more moderate positions might get him into the fight not just in toss-ups but for a few Democratic-leaning states. These small variations aside, the same overall game plan will be used by any of this group.

Similarly, not all that much changes for President Obama. Potentially, he gains a bit of traction in the South with Romney or Huntsman as his foe, none of whom has obvious appeal beyond party label to Dixie. The widest opening for Obama would come against Perry. Moderate states in the North and West might have real concerns about Perry’s Lone Star swagger. He could also be a difficult sell in the influential suburbs of Northern Virginia.

A hidden advantage for the GOP has been delivered by reapportionment following the 2010 census. While it is difficult to say precisely, it appears that the Republican nominee could gain about a half-dozen net electors from the transfer of House seats, and thus electoral votes, from the northern Frostbelt to the southern and western Sunbelt. Put another way, John Kerry could no longer be elected just by adding Ohio to his 2004 total. The bleeding of electoral votes from Democratic states would leave him six short of the magic 270.
The best-laid plans of Electoral College analysts can be undone overnight by the capricious rise of one or more third-party or independent candidates, just as George Wallace from the right (1968), Ross Perot from the middle (1992), and Ralph Nader from the left (2000) showed.

Right now, though, a troubled President Obama — so far unopposed for renomination — has the luxury of keeping both eyes on the Electoral College, planning his trips and policies accordingly. By contrast, the leading Republican contenders are forced to focus their gaze squarely on delegate votes. Still, clandestinely they are already seeking admission to the only College that can give them the job they want. It may be archaic and outmoded, but the Electoral College is still running the show 222 years on.