The Buckeye State, long recognized as the premier presidential bellwether, deserves its status. In the 28 presidential elections since 1900, Ohio has correctly picked the winner 26 times.

Ohio has company at the top though — it beats out another top presidential swing state, New Mexico, by only percentage points. The Land of Enchantment has incorrectly picked only two elections since 1900, but because it only became a state in 1912, it has only been right 23 of 25 times, and thus has a slightly lower batting average (92%) than Ohio (92.9%).

Generally, the states with the worst records since 1900 are the states of the Deep South. This is no surprise — in the early 1900s, most southern states voted for Democratic losers before turning ruby Red Republican, while occasionally supporting third party candidates in the middle of the century. Of the 11 states of the old confederacy, only two — Peripheral South states Florida and Tennessee — have correctly picked more than 70% of the presidential winners since 1900.

Likewise, the District of Columbia, since being granted presidential electors in time for the 1964 campaign, has had the same record of picking presidential winners (5/12) as the party its voters have uniformly supported (the Democratic Party). Vermont and Maine’s relatively poor record stems from the fact that they were the only two states to never support Democrat Franklin D. Roosevelt — it’s unthinkable today to think of those states as being solidly Republican, but they once were. (Alaska and Hawaii never had the chance to back FDR because they weren’t states when he was on the ballot.)

The majority of all states are in the solid 70%-85% range, generally supporting the presidential winners while occasionally going against the grain. The record of the states since 1900 is reflected in Map 1.

Map 1: How often states have sided with the winner in presidential elections since 1900 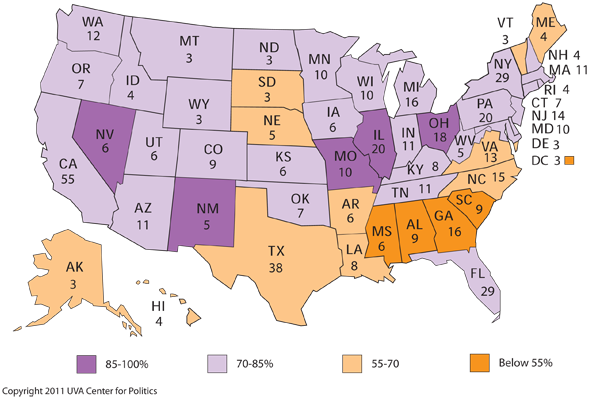 Ohio’s misfires came in 1944, when it picked Republican Tom Dewey (whose running mate was Ohio Gov. John W. Bricker) over FDR, and in 1960, when it preferred Republican Richard Nixon over Democrat John F. Kennedy. “Of America’s 10 most populous states,” Nixon said at an Ohio event in 1981, “Ohio is the only one besides my home state of California in which I’ve never lost a national election, and I thank you for that.”

Ever since 1960 — for nearly half a century — Ohio, alone among its peers, has a perfect record in picking presidents.

New Mexico’s misfires are more recent: in 1976 it went for Republican Gerald Ford in his close loss to Democrat Jimmy Carter and in 2000 for Democrat Al Gore over Republican George W. Bush. The 2000 margin — only 366 votes — was closer in terms of raw votes than Florida (won by Bush by 537 votes).

But New Mexico’s sterling record might be in jeopardy because its growing Hispanic population could make it more Democratic and thus less likely to support narrowly-elected GOP presidents. In 2008, its electorate was 41% Hispanic according to exit polling, or more than quadruple that of the nation as a whole (9%). This assumes that Hispanics, who voted two to one for President Obama in 2008, remain a Democratic constituency, which is not at all certain.

Meanwhile, Ohio’s electorate in the 2008 election was only 4% Hispanic, which means Ohio might be less representative of the nation going forward if it continues to have a relatively small Hispanic population.

Illinois, trending Blue, and Missouri, trending Red, are probably past their best days as bellwether states.

Nevada — tied with the Show Me State as the third rated state on the list with a 25/28 record — might be the state to watch going forward. In 2008, its electorate was 69% white, 15% Hispanic, 10% black, 3% Asian and 3% other, which might generally be what the electorate looks like, racially, in the near future. And, had we started this survey exactly 100 years ago (the 1912 election) Nevada would have the best record at 24/25 elections, misfiring only in 1976.

For the time being though, and despite population loss that just reduced its number of electoral votes from 20 to 18, Ohio is going to be perhaps the most-watched swing state in 2012, as both parties will try to appeal to the state’s fickle voters. For nearly half a century the Buckeye State has been the Northern Star of presidential elections, guiding political watchers in the direction of winners. It remains the nation’s bellwether until its voters — uncharacteristically — decide to go against the national currents. At that point Nevada or New Mexico might take its crown.