In November 1946, a tall, mustachioed figure stood alone on a railroad platform at Washington’s Union Station, waiting for the president of the United States to make his ignominious return to the capital. In victorious times, the platform would have been full of welcomers; as it was then, at the time of their party’s defeat, Dean Acheson, the future secretary of state, was the only one waiting for President Harry Truman.

Their meeting coincided with the start of a most-unusual electoral cycle in American history — one that a new crop of Democrats, some 65 years later, are eager to repeat.

Two years later, in 1948, Truman not only won reelection, but his party captured an eye-popping 76 House seats in the process, thus reclaiming the House.

Can it happen again? At this point, handicapping the big picture in the race for the House is difficult because the election itself is more than a year away and decennial redistricting is not yet complete. But the playing field is beginning to emerge.

State legislators control the drawing of new congressional districts in most states: Of the 43 states that have more than one congressional representative and thus need to create new districts to reflect the new census, only seven use nonpartisan redistricting. And in places where one party controls the process, partisan lawmakers are showing zero restraint in gleefully eliminating their political enemies.

In Illinois, the Democrats who control the redistricting process settled on a plan that may turn an 11-8 Republican House delegation into something like a 12-6 Democratic delegation (Illinois is losing one seat). Meanwhile, in North Carolina, where the Republican legislature draws the lines, the GOP is expected to pick up two to four seats at the expense of Democrats.

Texas, whose Republican legislators exercise power with the same understated nuance as a laser blast from the Death Star, has created a map that adds four new seats — which should lead to the Republicans gaining a net of two seats — and shores up two vulnerable freshmen. California, meanwhile, has entrusted its redistricting to an independent commission, and the draft map will shake up the typically uncompetitive House contest in the Golden State if it is enacted. Democrats are expected to benefit at the end of the day, but the map is not final.

In addition to redistricting, the number of representatives from some states will be changing, with Southern and Western Sun Belt states generally gaining at the expense of Northern and Midwestern Frost Belt states.

In the states losing seats, both parties seem to suffer about equally, with Democrats (blue) losing six seats, Republicans (red) losing five and one seat (tan) yet to be determined (New Jersey).

Chart 1: Projections of eliminated U.S. House members because of reapportionment 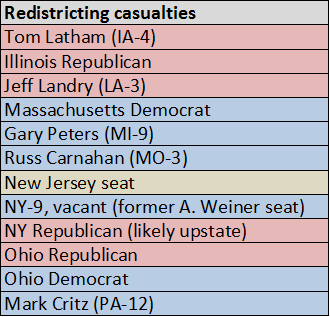 Notes: Latham is running against incumbent Democrat Leonard Boswell in Iowa’s reconfigured Third District, a race that we rate as a toss up. Critz, Peters and Landry likely will have to face more senior members in primaries in order to remain in Congress. Several Illinois Republicans were drawn out of their districts, but the bottom line is that at least one Illinois Republican, and probably more, won’t be in the next Congress.

As for the states gaining seats, effectively three of the four seats Texas is gaining should be Republican. Arizona, a nonpartisan redistricting state gaining one seat, and Florida, which is gaining two seats and whose Republican legislators may be constrained by a new “fair districts” state constitutional amendment, are difficult to judge at this point. Florida, in particular, looks ripe for Democratic gains: despite its status as perhaps America’s premier swing state, Republicans control a lopsided 19 of its 25 House seats. New seats in Nevada and Washington probably will go to Democrats, while new seats in Utah, South Carolina and Georgia will almost assuredly go to Republicans.

The reapportionment scorecard, then, is as follows:

That small Republican gain may end up being canceled out by Democratic redistricting success in other places, such as Illinois (certainly), California (probably) and Florida (maybe).

One wild card: For the first time since the passage of the Voting Rights Act in 1965, the Justice Department is controlled by Democrats during redistricting. That could lead to more lawsuits and delays in redistricting, and Republican-drawn maps, particularly in the South, may face added scrutiny.

With all the necessary caveats about the uncertainty of once-in-a-decade redistricting, not to mention the unknown strength of the eventual candidates who emerge in individual races, here are our initial rankings of 2012’s House races. As always, toss ups can go either way, lean seats slightly favor one party or the other and likely seats are seats where one party is clearly favored. Seats not listed are currently considered safe for the incumbent party. 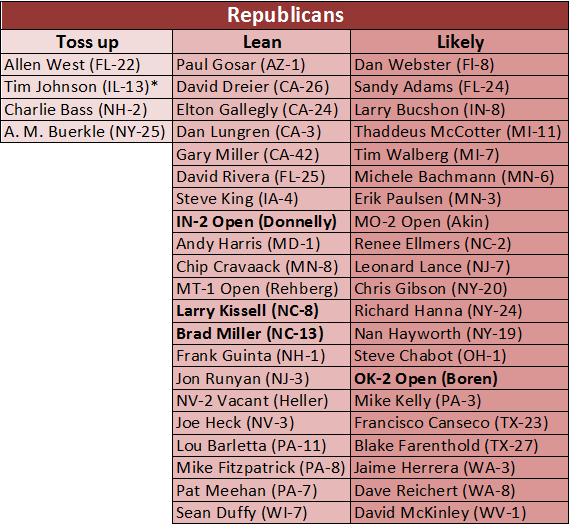 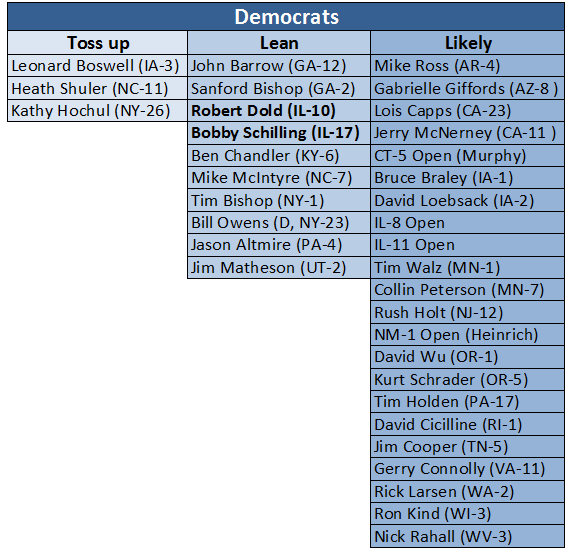 Notes: Names in bold represent districts where the incumbent party is not favored to keep the seat. *Johnson currently represents IL-15, but will be running for reelection to the House from IL-13.

Many of the Republicans who won for the first time in 2010 represent GOP-leaning districts. For instance, with the exception of Florida, Republicans picked up 18 seats in the remaining 10 states of the old Confederacy. Only one of those seats (Rep. Renee Ellmers, R, NC-2) is on our list, but her district was made more Republican in the likely new congressional map, and she is an early favorite to win reelection. Most of the other seats are districts that, under the old congressional map, Republican John McCain won in the 2008 election. The midterm election of 2010 dealt yet another blow to the moderate “Blue Dog” Southern Democrat, and the seats they lost, barring scandal or surprise, likely will not be competitive in this next election. In general, Democrats have few opportunities in the 22 states that McCain won in 2008; of the 46 Republican-held seats listed on our charts of competitive races, just six are in McCain states. Likewise, of the 35 Democrat-held seats listed on our charts, only eight come from McCain states. That’s because the Republicans already knocked off many vulnerable Democrats in Republican-leaning districts and states last year.

Democrats are focusing on the 61 districts that Obama carried in 2008 that are now represented by Republicans in the House (again, this is under old maps); other than two in Texas and one each in Nebraska and Kansas, all of these Obama/Republican districts are in states Obama carried. Generally, these seats are clustered around Chicago and across the Upper Midwest; between Philadelphia and Rochester; and across Florida and Southern California. Geographically, these are the places where Democrats need to make their move.

But other than Illinois and potentially California and Florida, there aren’t obvious places where Democrats are poised to capture a significant number of seats. Democrats lost a dozen seats in 2010, for instance, in Michigan (two), Ohio (five) and Pennsylvania (five), which would seem to be good places for Democrats to counterattack. But Republicans control redistricting in all three states, and this will limit Democratic opportunities at least in the short term. Ohio, whose House delegation was 10-8 Democratic before the 2010 election, could have a 12-4 GOP House delegation encased in concrete after redistricting. Meanwhile, a Michigan map that should at least slightly help GOP incumbents awaits Republican Gov. Rick Snyder’s signature, and Pennsylvania Republicans likely will shore up their incumbents.

New York, where Democrats lost six seats in 2010, would also seem to be a rich bounce-back state for Democrats, but Republicans there control the state Senate and will have a say in redistricting.

The California rankings are based on a draft map released several weeks ago by the state’s nonpartisan redistricting commission, but that map probably will change, possibly significantly. One thing appears clear, though: California, which under its last map saw only one House seat change hands — Rep. Jerry McNerney (D, CA-11) defeated Republican Richard Pombo in 2006 — should see a lot more competitive races in upcoming elections.

As maps are approved — a process that probably will not be completed in all states until next year, especially with an expected bonanza of lawsuits that will act as a stimulus package for the legal profession — the picture will get clearer and this list will undoubtedly go through many revisions.

Democrats need less than a third — 24 — of the seats Truman’s Democrats won in 1948 to recapture the House, but it is still a very tall task.

History is not in the Democrats’ favor: In 16 post-World War II presidential elections, the party of the winning presidential party has picked up an average of only about 13 House seats. And that average is skewed upward by the 1948 Truman landslide.

Can they do it? Paul Ryan’s budget plan, which would effectively change Medicare into a voucher system, gives Democrats a potentially potent weapon, especially among seniors, who are the most committed voters. And an economic recovery, combined with a weak GOP presidential candidate, could sweep Obama back into office with, if not Truman-like coattails, enough strength to move the House back into the Democratic column. Such a combination of sunny factors for the Democrats is an unlikely forecast, but in this era of wild weather, it is at least possible.

A few days before Election Day in 1948, the ex-New Deal Roosevelt adviser turned conservative commentator Raymond Moley declared in Newsweek that “This year the Presidential race can be taken for granted…as we view this campaign from a detached position, we all know that the trend is conservative…My guess is that there will be a dozen or so more Republicans in the new Congress.”

Moley and many other commentators were far off the mark on their predictions in 1948, although one doubts that even Truman and Acheson, standing on that railroad platform two years earlier, could have predicted the Democrats’ miraculous comeback.

So at this very early stage, the Crystal Ball would place a decent-sized bet on the Republicans to retain the lower chamber of Congress. Yet out of an abundance of caution — instilled by history’s sometimes erratic, fickle gyrations — we are not yet ready to write off Democratic chances in the House completely. There are too many land mines on the long and winding road to November 2012 for both parties to be absolutely sure of anything 481 days before America votes.