We here at the Crystal Ball, and of course our readers, love politics. But Americans don’t, especially now: Congress is historically unpopular, and Americans are so sick of politics that more than two-thirds of them according to one survey wished the presidential campaign was over even before it officially started.

With that in mind, here’s a theory about the 435 House races this year:

If Americans are truly fed up with politics, then are they really going to be paying a ton of attention not just to the presidential race, but to down-ticket races as well? Granted, a presidential campaign sucks up so much media oxygen that it is difficult to ignore for even low-information voters, but it’s easier for voters to tune out races down the ballot if they’re so inclined.

If that’s true, then consider that the presidential race is, perhaps more than usual, going to define what goes on down the ticket in this election. That of course would have major and as yet unforeseeable implications for the race for the House.

One thing we do know is that the number of split results in House districts — as in, when voters simultaneously pick one party at the presidential level and another party in their House contest — has steadily declined over the past generation. In 1984, there were 196 split districts: the result of President Ronald Reagan’s romp combined with the reelection of a Democratic House. That number has declined since then to 83 split districts in the 2008 presidential race (split district stats come from Vital Statistics on American Politics). As the conservative Democrat and (especially) the liberal Republican becomes extinct, one can imagine the number of split districts declining further. Of course, individual candidates, issues and scandals will undoubtedly affect some individual races, but the national tides in many places will be paramount.

Democrats need to win 25 additional House seats to retake the speaker’s gavel next year. In order for them to do that, President Obama will need to win next year, and that probably won’t be enough. What Democrats really need is a poisonous, damaged Republican nominee who not only loses to Obama but causes harm down the ticket.

A fresh look at the House

Chart 1 shows the House ratings we have changed since our last update (Oct. 20). Given the importance we’re giving the presidential race in determining the House, these ratings also assume a close presidential election — perhaps like 2000 or 2004, when close to 98% of House incumbents seeking reelection were sent back to the House. If Obama is fading next Labor Day, one can imagine some of those “Likely Democrats” becoming “Leans Democratic” or “toss ups.” Likewise, if the Republican nominee is failing to get traction, or even bombing, then some of those Republican-held seats could get more precarious. 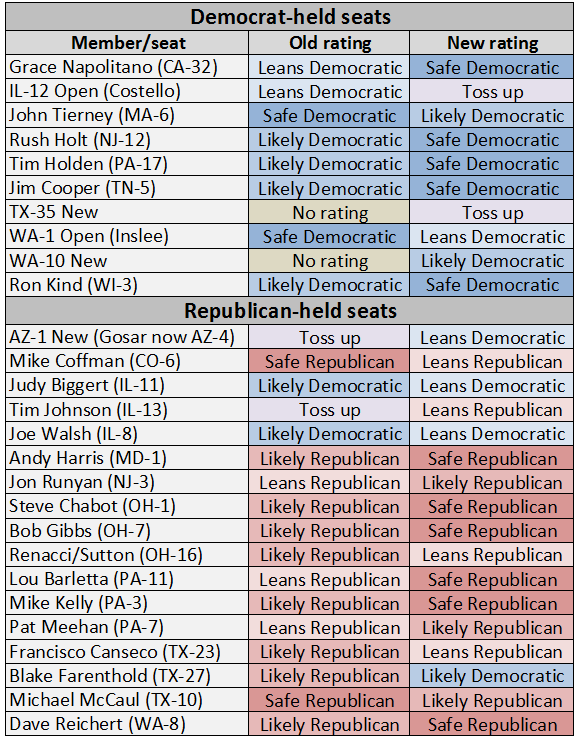 The rating changes shown in Chart 1 generally reflect redistricting, plus some reassessments of our previous ratings. The Republican-drawn Pennsylvania map shored up several Republicans and put two western Pennsylvania Democrats — Reps. Jason Altmire and Mark Critz — into the same, competitive district. New ratings in Illinois’ races either reflect incumbents deciding on their new turf (in the case of incumbent Republican Reps. Judy Biggert and Joe Walsh, who face uphill battles but get some deference because they are incumbents) or Democrats’ recruiting difficulties in competitive, downstate districts (IL-12 and 13). Nonetheless, Democrats continue to have many opportunities to pick up seats in Illinois, where they drew themselves a favorable map.

Rep. John Tierney, the Massachusetts Democrat, makes this list because of ongoing bad publicity from scandals affecting his family. He will probably be fine (or another Democrat will ultimately win the district), but placing him on our “likely Democratic” listing effectively means that we are watching this race, especially because he appears to have attracted a credible Republican challenger. Also in the Bay State, Joe Kennedy III apparently has decided to pick up the family’s Congressional standard and run for the retiring Barney Frank’s seat. We see this seat as safe Democratic territory.

Rep. Mike Coffman (R-CO) got a bad break in redistricting, making his safe seat competitive; Democrats in Maryland decided to target Rep. Roscoe Bartlett (R) in redistricting instead of Rep. Andy Harris (R), so the freshman’s district is now safe. Meanwhile, Democratic Reps. Tim Holden (PA) and Jim Cooper (TN) benefited from GOP-led redistricting, as Republicans sought to shore up their incumbents rather than target these long-time moderate lawmakers. Both are in the “safe” category for now.

Republicans got the best of recent redistricting in New Jersey and Washington. The Garden State, which lost a House seat because of slow population growth, will be down one Democrat: Reps. Steve Rothman and Bill Pascrell will fight in a primary. It looks likely that New Jersey, which is pretty heavily Democratic, will have six Republicans and six Democrats in the next House. On the left coast, Democrats will have to scratch and claw to win six of 10 seats in Washington — the open First District currently held by likely Democratic gubernatorial nominee Jay Inslee has turned into a swingy though slightly Democratic seat, while the new 10th District (Washington gained a seat after the census) falls in the likely Democratic column. Two potentially vulnerable Evergreen State Republicans — Dave Reichert and Jaime Herrera Beutler — saw their districts made more Republican. In all likelihood the Democrats will make up for their lost New Jersey seat by picking up the new seat in Washington, but for Republicans, maintaining what amounts to a status quo in two Democratic states would be a win.

Democrats got some help in Arizona: Rep. Paul Gosar (R) recently decided to vacate his swingy First District to run in the far more Republican Fourth. That gives ex-Rep. Ann Kirkpatrick (D) a good chance to get back to Congress.

The changes in the Texas ratings — all favorable to Democrats — are contingent on the U.S. Supreme Court upholding a court-drawn, Democratic-friendly map there, rather than one Texas Republicans drew that was favorable to their party. The Texas Republican most jeopardized by the court-drawn map is freshman Rep. Blake Farenthold, whose current seat will be much bluer if that map is upheld. Obviously, if the Republican-drawn map is reinstated — or a third map is introduced into the mix — these ratings will change. States where redistricting has yet to be completed include two of the nation’s four largest states — New York and Florida — as well as some other places, such as Minnesota, where Republican Rep. Michele Bachmann, an ex-presidential hopeful, has yet to decide on whether she’ll run for a fourth term in the House.

If these rating changes seem like a muddle, with Democrats and Republicans alike gaining in some places and faltering in others, that’s because the changes are a muddle. And ultimately a muddle is good for the GOP because they already hold the majority. 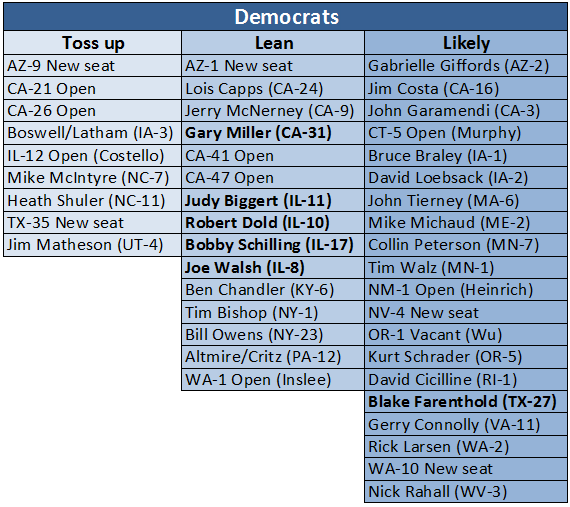 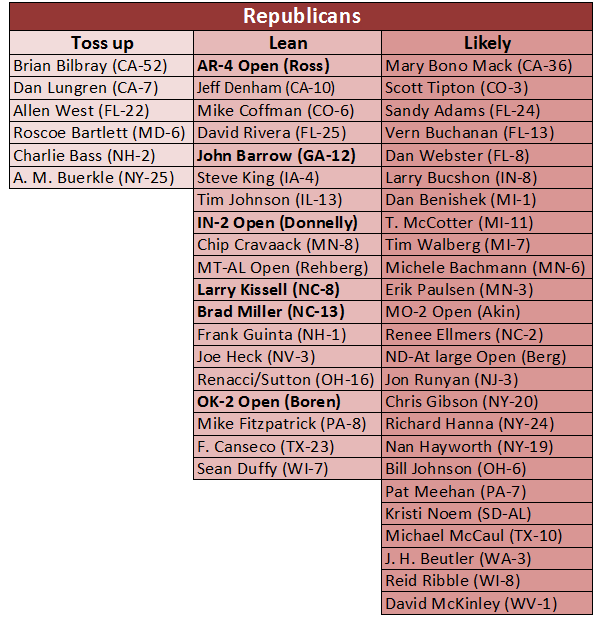 Notes: Seats in bold are ones where the current party holding the seat is not favored to keep it. To see a chart rating all 435 House seats by state and district number, please visit the Crystal Ball‘s House Race Page.

One of the 94 competitive races is Oregon’s First District, where a special election (by mail) is underway to replace a retired Democrat, the extremely odd David Wu. Votes will be tabulated on Jan. 31; former state Sen. Suzanne Bonamici (D) is favored over 2010 Republican nominee Rob Cornilles. The Democratic Congressional Campaign Committee has spent more than $1 million to help Bonamici in the Democratic-leaning district, and polls have consistently shown Bonamici ahead, albeit not by huge margins. The DCCC’s Republican counterpart, the National Republican Congressional Committee, is apparently starting to spend on the race too. It could just be a bluff, or maybe they believe that Cornilles has the ability to spring an upset.

Whatever happens, the result may be buried by the truly big event being held the same day, the Florida presidential primary. In the end, the identity of the GOP White House nominee — and his coattails, or lack of them in November — will have a much greater impact on the House balance than this special election in Oregon’s First.