As pollsters and political commentators have focused on the outlook for the November general election, swing voters have invariably been getting a lot of attention. According to a recent AP/GfK Poll, swing voters — those who are undecided or uncertain about which candidate they will support — make up 27% of the electorate. In what is expected to be a close race, which way they swing will go a long way toward deciding the winner.

The AP/GfK estimate that swing voters make up 27% of the American electorate is consistent with the results of other recent polls in which voters were asked how certain they were about their candidate choice. But there are good reasons to question whether there are nearly that many voters whose candidate preference is actually changeable. Evidence from a 2008-2009 panel survey conducted by the American National Election Studies shows that the proportion of voters who actually shift their preference during the course of a presidential campaign is much smaller than the proportion who claim to be uncertain about their choice. Moreover, most of the shifts that do take place appear to be explained by voters’ prior party loyalties rather than anything that happens during the campaign.

The 2008-2009 ANES panel study involved an Internet-based survey of a sample of Americans that was designed to represent the characteristics of the voting-age population. Respondents were questioned several times between January 2008 and September 2009, including immediately after the presidential election. This makes it possible to directly measure stability and change in respondents’ candidate preferences.

The question asking about candidate preference in a presidential contest between Barack Obama and John McCain was first asked in the June 2008 wave of the survey. In an attempt to simulate an actual election, the format of the question did not include “undecided” or “other” options so respondents were forced to choose between Obama and McCain. However, a follow-up question asked how sure respondents were about their candidate choice — extremely sure, very sure, moderately sure, slightly sure or not sure at all.

In the June wave of the survey, Barack Obama led John McCain by 51% to 49%. At that time, 75% of respondents were either extremely or very sure about their choice, while 14% were moderately sure and 11% were slightly sure or not sure at all. Based on these results, one might conclude that 25% of respondents who were less than very sure about their choice should be classified as swing voters — a percentage similar to that found in recent polls on candidate preference in the 2012 presidential election.

However, based on the data from the ANES panel survey, this estimate appears to greatly overstate the volatility of the electorate. As the results displayed in Table 1 show, only 8% of respondents switched candidates between June and November. These switches basically canceled each other out: 9% of McCain supporters switched to Obama while 7% of Obama supporters switched to McCain. Ninety-two percent of respondents ended up voting for the same candidate in November that they supported in June. The results were almost identical for voters in the 15 swing states (Colorado, Florida, Indiana, Iowa, Michigan, Minnesota, Missouri, Nevada, New Hampshire, New Mexico, North Carolina, Ohio, Pennsylvania, Virginia and Wisconsin) where the Obama and McCain campaigns focused their efforts. Nine percent of voters in the swing states switched candidates between June and November compared with 7% of voters in all other states.

Table 1: Stability and change in presidential candidate preference between June and November 2008 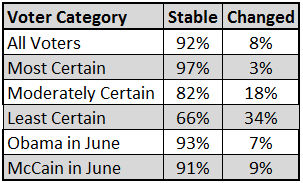 Ninety-seven percent of respondents who were extremely or very sure about their choice in June ended up voting for the same candidate in November, but so did 82% of those who were only moderately sure and 66% of those who were slightly or not at all sure. Moreover, the strongest predictor of whether respondents stuck with their original choice or switched sides was not anything that happened during the campaign, but whether that original choice was consistent with their party identification.

Table 2: Stability and change in presidential candidate preference between June and November 2008 by consistency of June preference with party identification 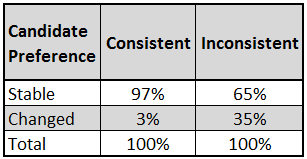 These results show that most of the movement that took place between June and November involved wayward partisans returning home. Such shifts accounted for 62% of all candidate switches while pure independents switching candidates accounted for 13% and partisans moving to the opposing party’s nominee accounted for 25%. Based on these results, it appears that the main effect of the campaigns was to activate voters’ partisan predispositions.

Another very common assumption about the American electorate is that independents are very likely to be swing voters. Indeed, the terms independent and swing voter are often used interchangeably. However, evidence from the ANES 2008-2009 panel survey indicates that only a small minority of independents are actually open to persuasion during the presidential campaign.

There is every reason to expect that the patterns of stability and change within the American electorate in 2012 will be similar to those found in 2008. In fact, with an incumbent president running for reelection, voter preferences could turn out to be even more stable this year than they were four years ago. The evidence from the 2008-2009 ANES panel survey indicates that the impression one often gets from pundits and pollsters of a fickle electorate that easily moves back and forth between presidential candidates in response to news stories and campaign events is highly misleading. With the two major parties deeply divided on a wide range of policy issues and party loyalties stronger than at any time since the end of World War II, the vast majority of American voters, including the vast majority of independents, know how they are going to cast their ballots well before the fall campaign begins.