We all know what Donald Trump is saying and the issues he’s emphasizing. Many have noted the strong reactions of the media, pundits, and his business associates, some of whom have cut ties. Now the most recent surveys show Trump in the double digits among Republicans nationally. Two new polls have even found Trump ahead of Jeb Bush, the nominal frontrunner: Economist/YouGov’s survey placed Trump at 15% and USA Today/Suffolk University’s poll showed him at 17%.

Who are these Trump backers? As the accompanying table (derived from all respondents to the Economist/YouGov opt-in Internet panel poll) shows, they are disproportionately white. Favorable views of Trump among African Americans are minimal, and Hispanic boosters are at a higher level than blacks but well below that of whites. Older voters (those age 65 and over) undoubtedly form his core; in fact, the 65+ group is the only age cohort to view him favorably, 59% to 39%, virtually the opposite view of all other age groups. Trump has particularly little appeal among younger, more diverse voters: 20% of those under 30 rate Trump favorably (versus 60% unfavorably). Trump also fares somewhat better with men than women, and those with lower incomes ($40,000 and less). While the regional differences are not enormous, Trump does worst in the South and best in the Northeast. 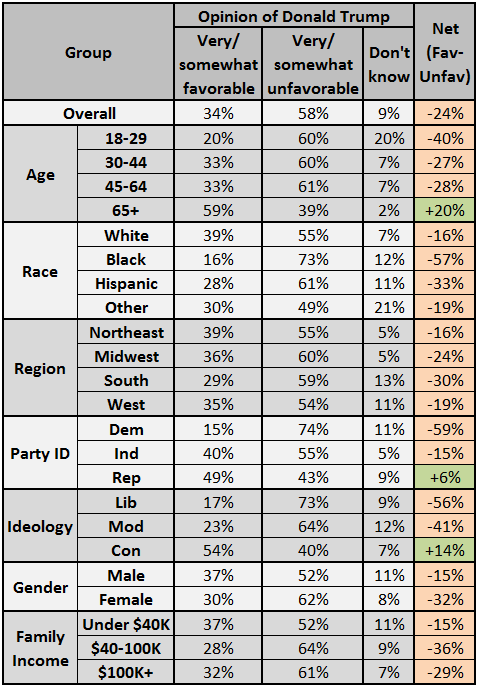 How does the Trump profile compare to Ross Perot, the 1992 independent candidate who won a remarkable 19% in the general election between George H.W. Bush and Bill Clinton? Note that we are mixing polling apples and oranges to a degree. The YouGov Trump poll measures just favorability, whereas the Perot profile comes from arguably the best possible survey (when done correctly): the November 1992 exit poll of real voters taken at the precincts on Election Day.

Nonetheless, there are significant similarities in the support profile of Trump and Perot, as shown in Table 2. Perot’s vote was disproportionately white, male, and Republican or Independent. However, there is one notable difference: Perot fared best not with the oldest cohort but with voters between 25-29 years, and more generally with voters under 50 — not the retirees attracted to Trump. Like Trump today, Perot ran more poorly in the South than any other region. But Perot’s apogee was in the West, not the Northeast. 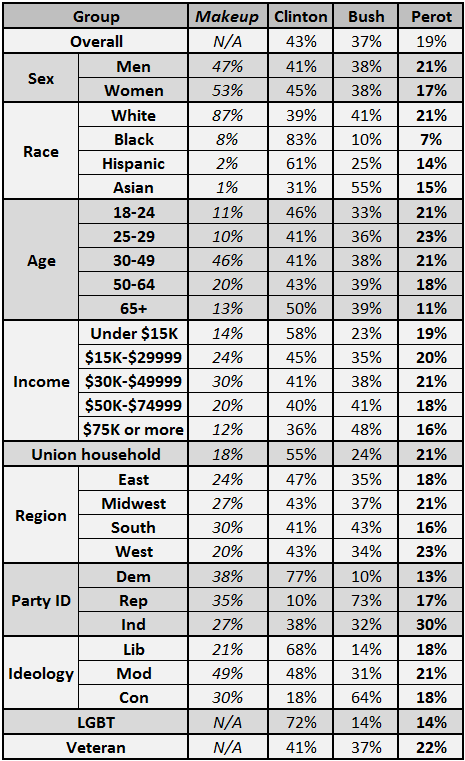 The other modern candidate bearing some resemblance to Trump also comes from 1992. Populist conservative Pat Buchanan challenged President Bush in the Republican primaries, and ran fairly strongly in the New Hampshire primary (37% to Bush’s 53%). The exit poll for that primary was far off the mark, demonstrating that today’s polling problems have plenty of precedent. But the Times Mirror Center for the People and the Press (now part of the Pew Research Center) took a national survey right after the Granite State primary. Buchanan trailed Bush 18% to 77% nationally among Republicans; still, the former Richard Nixon aide and TV personality ran better with men, younger voters, and those with less than a high school education (and presumably, those with lower incomes). Like Trump does now, Buchanan drew disproportionately among Northeastern GOP voters. 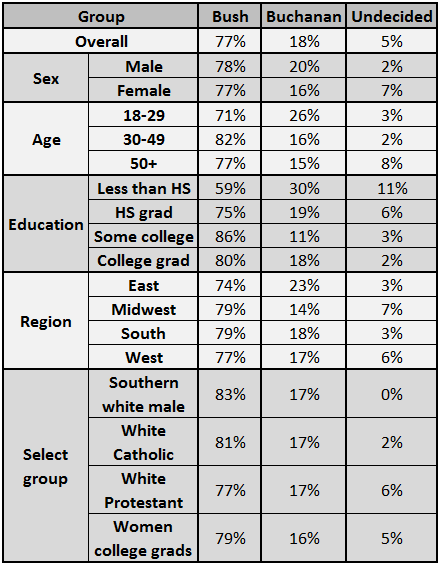 Unquestionably, elements of style link Trump, Perot, and Buchanan: brashness, bluntness, and straight talk. All three men were more than willing to push hot-button issues that stirred many voters’ passions. In this respect, they were Barry Goldwater-esque, providing a choice, not an echo, to voters. While having a major impact, and attracting attention and lots of votes, Buchanan and Perot could not put together anything close to a winning plurality, either for a party nomination or general election. We suspect this is the future of Trump’s 2016 candidacy.

However, Buchanan did real damage to an already declining President Bush, and not just in the New Hampshire primary. As the keynote speaker at the 1992 GOP National Convention, Buchanan delivered a harsh, culture-war address on primetime TV, further dividing Republicans. Perot had a major impact the following November. While contemporary surveys indicated that Clinton would have won a two-way contest with Bush, Perot blocked any possible comeback by the president. Perot focused most of his attacks on Bush, and drew a disproportionate number of his votes from traditionally Republican segments of the electorate — pushing Bush down to a humiliating 37% (the lowest percentage of the vote won by an incumbent president since William Howard Taft secured a mere 23% in 1912).

It’s easy to conclude that Donald Trump isn’t going to help the GOP’s image with Hispanics and many swing voters, but it’s also impossible to know how much Trump will actually injure the Republican brand in this cycle. How long will he stick around? If Trump drops out before the voting begins in early 2016, or even midway through the primary season, voters will have many months to forget and move on. Yet Trump could stick it out, get his slice of votes all the way to June, and deliver a raucous, memorable address to a huge TV audience at the national convention. In the short term, Trump takes up a huge amount of media oxygen. There’s only so much coverage to go around, and if television segments and news stories continue to focus on Trump, that’s airtime that candidates with less name recognition — like Marco Rubio, Scott Walker, John Kasich, and many others — are not getting.

In the worst nightmare for the eventual Republican nominee, Trump might run as an independent in November once the primary process has concluded. “Sore-loser” laws that exist in 44 states do not generally apply to presidential candidates, and even in the few cases where they do, a court challenge by Trump might well be successful. In part, this is because the “candidates” on the ballot in a general election for president are the electors, not the politicians to whom the electors are pledged.

In the fall Trump could squeeze the GOP in two ways. Most of the votes he would drain would almost certainly come from the Republican-leaning pool. And Trump would make immigration a headline issue day after day. The eventual GOP nominee is unlikely to have an immigration package as appealing to Hispanics as the Democrats will have, so Republican hopes of changing the subject to win more Latino votes by means of cultural or economic issues would be more difficult.

Unless and until Donald Trump changes course, Republicans ought to stock up on Excedrin. Make that migraine-strength Excedrin.