Gov. Bruce Rauner (R-IL) endured a difficult night on Tuesday. Although he won his party’s primary to earn a reelection shot in November, the contest in some ways confirmed his overall weakness as the most endangered incumbent Republican governor facing the voters in 2018. As such, the Crystal Ball is moving the Illinois gubernatorial contest from Toss-up to Leans Democratic, the first time in the 2018 cycle that we have rated an incumbent U.S. senator, U.S. House member, or governor as an underdog for reelection. Rauner’s vulnerabilities are two-fold: his party base is not solidly behind him — the GOP primary made this abundantly clear — and he faces an energized Democratic Party in what is typically a blue state. 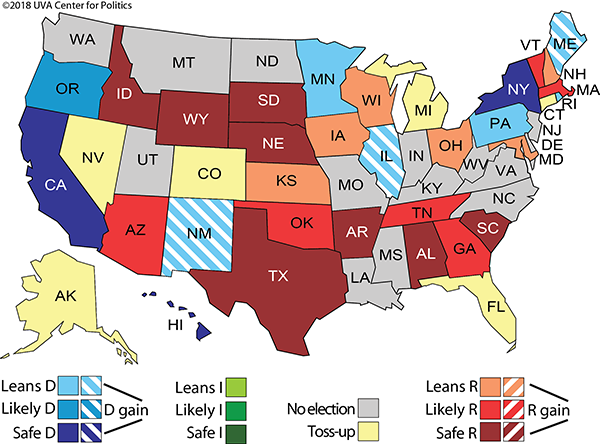 In the Republican primary, Rauner narrowly fended off a challenge from state Rep. Jeanne Ives, who few initially expected to endanger the incumbent’s renomination chances. However, by primary day stories and rumors abounded that Rauner might actually lose — and he very nearly did. Rauner escaped with a three-point win, 51.4% to 48.6%, over Ives, who gained support during her campaign from GOP megadonor Richard Uihlein, among others. The incumbent governor infuriated many conservatives last year when he signed into law legislation passed by the Democratic-controlled state legislature that increased the range of public funding for abortion services in Illinois to include individuals on Medicaid and participants in the state employee insurance program. Ives attacked Rauner from the right, running now-infamous ads that many called bigoted and transphobic. Even the state Republican Party chairman called for her to stop running them. Yet Ives clearly found some success as she nearly defeated an incumbent governor whose personal wealth provides a bottomless campaign war chest, some of which Rauner used to attack Ives by portraying her as a lemming of state House Speaker Michael Madigan (D).

Meanwhile, the Democratic primary electorate nominated its own billionaire businessman, J.B. Pritzker, to be the party’s standard-bearer in November. In some ways, Pritzker (D) might actually be the Democrat that Rauner would most prefer to face. Pritzker showed up on old wiretap recordings talking to defrocked ex-Gov. Rod Blagojevich (D), who the state legislature impeached and removed from office in 2009 following federal corruption charges. Rauner has attempted to push the Pritzker-Blagojevich connection in ads. On top of this, some Democrats do not exactly get warm and fuzzy feelings when thinking about billionaires, and now their party has one as its nominee. Nonetheless, Pritzker won a solid plurality of the vote over state Sen. Daniel Biss and businessman Chris Kennedy, son of former Sen. Robert Kennedy (D-NY).

With our ratings change, Pritzker starts the general election campaign with an edge over Rauner. On top of Rauner’s intraparty problems, primary turnout also augured poorly for the incumbent. As many analysts noted, Democrats showed their energy and engagement on Tuesday. With competitive gubernatorial primaries on both sides and an open primary system that permits Illinoisans to vote in either party primary, Democrats accounted for 64% of the gubernatorial primary vote and Republicans just 36%. While primary turnout is not in and of itself a great predictor of general election results, the impressive Democratic turnout is notable because of the state’s open primary system and because in the last competitive gubernatorial primary in 2010 Democrats had a much smaller 54%-46% turnout edge.

With two extremely wealthy major-party nominees and few campaign finance limitations for self-funders, the Illinois contest could end up being the most expensive gubernatorial contest in U.S. history. At the starting gun, Pritzker holds an early advantage.