While there has not yet been a major breakthrough for Democrats in the House, their fortunes do appear to be improving, at least marginally. We’re making 11 ratings changes: nine favor Democrats, while two favor Republicans.

Let’s start with the changes that boost the GOP. While Hillary Clinton is going to dominate Donald Trump in their shared state of residence, New York, Trump may marginally improve on Mitt Romney’s margins outside of New York City’s five boroughs. That could help Reps. John Katko (R, NY-24), who occupies an upstate seat that Barack Obama won by 16 points, and Lee Zeldin (R, NY-1), who holds a swing seat on the eastern end of Long Island. Katko beat an incumbent by a remarkable 20 points in 2014, and Democrats have had a hard time truly putting the seat in play. Zeldin also won by a surprisingly large eight-point margin over an incumbent two years ago in one of the more politically balanced seats in the nation. Recent Siena polls showed the incumbents with big leads — too big, perhaps, but there seems to be some agreement that the Republicans are ahead. A wave could still wash away these incumbents but they move from Toss-up to Leans Republican.

We continue to monitor suburban swing districts that have high numbers of college graduates. Given Trump’s potential to perform at historically poor levels with white college graduates, Clinton should over-perform in these districts, forcing incumbents to generate higher levels of ticket-splitting to survive. There’s perhaps no better district in the country for Democrats to use Trump to their advantage than VA-10, a Northern Virginia seat that has the highest median income in the nation and is one of only a handful where more than half of the residents over 25 have at least a bachelor’s degree. There are few harder workers in politics than Rep. Barbara Comstock (R), a first-term member who is a prodigious fundraiser. But she finds herself in a tough race with businesswoman LuAnn Bennett (D). If it weren’t for Trump, Comstock would be a clear favorite. But with less than three weeks to go we see the race moving from Leans Republican to Toss-up.

Republicans have long struggled in California House races, and the potential exists for Democrats to add to their already impressive 39-14 seat majority in the nation’s largest House delegation. Democrats are making late charges against Reps. Jeff Denham (R, CA-10), Darrell Issa (R, CA-49), and Steve Knight (R, CA-25), who all occupy swing districts. The surprising competitiveness of Issa’s race may involve something of an Eric Cantor effect. The former House majority leader shockingly lost a 2014 primary in part because he had high name ID — just not the right kind of name ID for an ornery electorate. One wonders if the high-profile Issa, an Obama administration antagonist who only won the June all-party primary by about five points, is having a similar problem. If so, Issa’s big money advantage — he’s the wealthiest member of Congress — might not help him.

Ultimately, Trump is just a bad fit for diverse California, and Republicans may not have much reason to vote: In addition to an unappealing nominee at the top of the ticket, the Senate race features two Democrats. So, all three of these seats move from Leans Republican to Toss-up.

Additionally, first-term Rep. Pete Aguilar (D, CA-31) appears to be in decent shape, and his race goes from Likely Democratic to Safe Democratic. Republicans do have opportunities in two Democratic-held seats in the open CA-24 and against Rep. Ami Bera (D, CA-7), but we still see Democrats as small favorites in both.

As Clinton’s fortunes improve in ME-2, so too do the fortunes of ex-state Sen. Emily Cain (D). Her rematch with Rep. Bruce Poliquin (R, ME-2) appears to be getting closer — she may actually be leading, in fact — and this race moves from Leans Republican to Toss-up. Even when some polls of ME-2 showed Trump up double digits in ME-2, Cain was typically losing to Poliquin by a smaller margin. It’s not impossible that Cain could outrun Clinton in the district, although Poliquin will also benefit from his incumbency.

Finally, a few other Republican-held seats could be sleeper pickup opportunities for Democrats. Most promising among this trio is the open PA-16, a Republican-leaning district that contains fast-growing Lancaster County as well as parts of Reading, an old industrial town that is now more than half Hispanic. Trump’s weakness in Greater Philadelphia may extend all the way to this district, perhaps providing an opening to Democrats. It moves from Likely Republican to Leans Republican. And coming on the board as Likely Republican are Reps. Mike Bishop (R, MI-8) and Jackie Walorski (R, IN-2). They both should be OK but Democrats are taking an interest in both districts.

Crucially, for Republicans, they could lose all the Toss-ups and still control the House 225-210, although that would leave them with a slim, unreliable majority where, in all likelihood, the conservative House Freedom Caucus could effectively hold veto power over Speaker Paul Ryan’s (R, WI-1) legislative agenda. (Some would contend the caucus already does.) In order to win the House, Democrats need all of the Toss-ups and eight of the 10 Leans Republican seats. Democrats are making progress as the campaign moves to a conclusion, but they still have a lot of work to do, and the Republicans remain clear favorites to hold the majority. 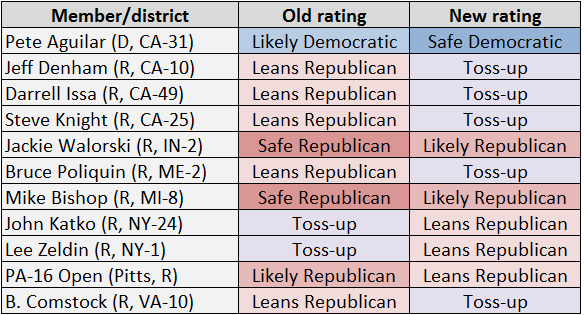 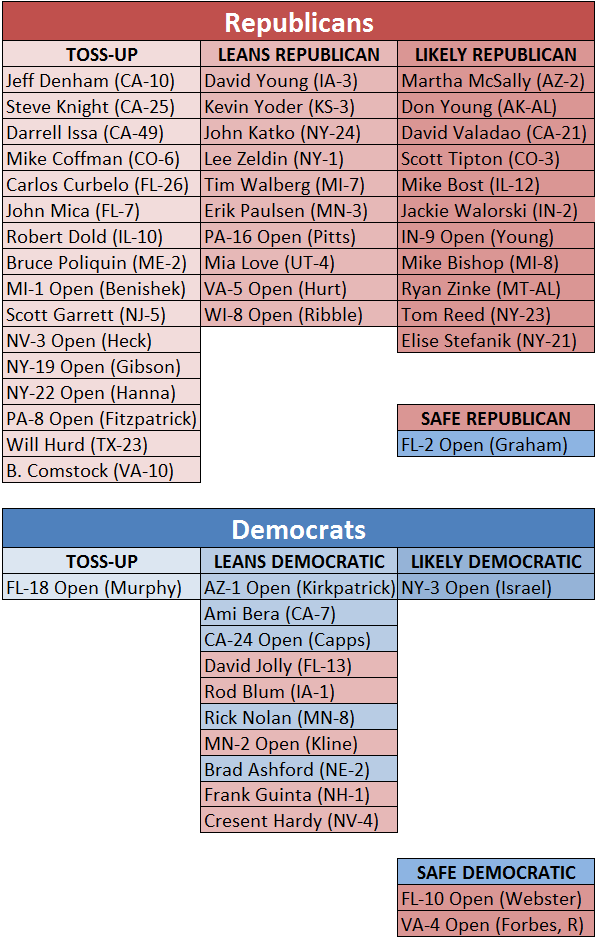