It has been about two decades now that the two major parties switched roles in Washington. For much of the last half of the 20th century, Republicans dominated the White House while Democrats enjoyed a virtual monopoly on both chambers of Congress.

But since 1994, their basic spheres of influence have changed. It is the Democrats that can be considered the “presidential party” after a pair of clear-cut victories by both Bill Clinton and Barack Obama, while the Republicans can best lay claim to being the “congressional party.” Certainly the latter is the case in the House of Representatives, where the GOP has controlled the lower chamber for 14 of the last 18 years.

Just as the electoral map has favored the Democrats in recent presidential elections, so has geography and a good bit of crafty cartography positioned the Republicans on the inside track in maintaining House control.

Geographically, the starting point for Republicans is the South, nearly as solidly for the GOP now as it was for the Democrats in the century following the Civil War. Republicans hold 108 of the 149 House seats across the region (which by definition here includes the states of the old Confederacy plus Kentucky and Oklahoma). The GOP’s Southern total represents more than 45% of all 234 seats that Republicans currently possess.

In many states across the South, the Democrats are barely competitive at the congressional level. In Virginia, they have just three House seats; in Tennessee, just a pair. In five Southern states — Alabama, Kentucky, Louisiana, Mississippi and South Carolina — Democrats are down to a single House seat. In Arkansas and Oklahoma, they have none at all. And it is difficult for the Democrats to make up ground elsewhere, because no other region possesses nearly as many House seats as does the continually growing South. The second largest region, the West, has 102 seats, while the once dominant electoral powerhouses of the Midwest and Northeast are down to just 94 and 90 House seats, respectively. As a result, the massive 67-seat GOP advantage in the South in 2012 easily offset Democratic strength in the Northeast and West, and was more than twice as large as the Republican House majority nationwide (33 seats).

Note: For this analysis, the following states make up the nation’s four basic regions:

Source: Official returns posted on the web sites of state election authorities. They are subject, in a few states, to amendment. The results of House balloting are based on total votes cast.

But the South alone did not ensure Republicans control of the House in the 113th Congress. A series of Republican-drawn congressional district maps in states across the industrial Frost Belt contributed significantly to the GOP’s continued majority.

For all practical purposes, this part of the country from “Scranton to Oshkosh” (as MSNBC’s Chris Matthews last year liked to put it) has become the nation’s prime battleground in both presidential and congressional voting. On one hand, it has boosted the fortunes of recent Democratic presidential candidates. Yet the Midwest has also helped propel Republicans to House majorities by providing the bulk of the region’s House seats to the GOP in all but one election since 1994 (the exception being 2008).

In 2012, Republicans ran up a 24-seat advantage across the Midwest (59 to 35). Add in a lopsided GOP edge in neighboring Pennsylvania (13 to 5), and the Republican spread in this portion of the Frost Belt swelled to 32 seats. Combined with their dominance in the South, it provided House Republicans with their comfortable majority in the new Congress.

The challenge for the Democrats in the years ahead is to make major inroads in this part of the country. But it will not be easy, as district lines in Michigan, Ohio, Pennsylvania and Wisconsin were carefully crafted by Republican state governments after the 2010 census.

The result was that even though the Democrats won more aggregate House votes last fall in all of these states except Ohio, the GOP won the bulk of the House seats in each — 9 of 14 in Michigan, 12 of 16 in Ohio, 13 of 18 in Pennsylvania, and 5 of 8 in Wisconsin. Add the totals together and that is a count of 39 seats for the Republicans and 17 for the Democrats in the Frost Belt “four” — all states carried by Democrat Barack Obama in the presidential voting.

The Republican formula for congressional success in these and other states that they control has been clear cut — pack Democratic voters into as few districts as possible, and spread out Republican-leaning voters in the rest. In Pennsylvania, for instance, most of the Republican congressional winners in November drew less than 60% of the vote, and three won with less than 55%.

Meanwhile, four of the five victorious Democrats in the Keystone State received at least two-thirds of the vote in their districts, with two Philadelphia-based Democrats (Chaka Fattah and Robert Brady) each rolling up at least 85%. For good measure, the number of congressional ballots cast in Fattah’s district (356,386) was the highest in the state, and the vote for Fattah (318,176) was the largest for any individual House candidate anywhere in the country last year.

With Fattah winning in a landslide, many of his votes could have been helpful to Democratic candidates in adjacent districts if the recent round of redistricting had been done more equitably. As it was, the large urban turnout was primarily a boon for Obama, who needed a huge margin in Philadelphia to carry the state.

Chart 2: Virginia has close House vote in 2012, but GOP wins bulk of seats 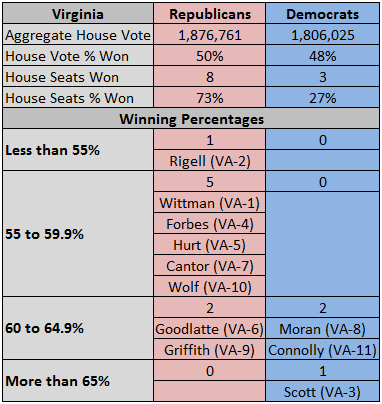 Note: Vote percentages are based on total votes cast.

Source: Official results from the website of the Virginia State Board of Elections.

Ultimately, congressional Democrats did not come close to winning a House majority in 2012. But they did score a moral victory of sorts by outpolling the Republicans in the aggregate nationwide House vote. To be sure, it is not a tally trumpeted on a tote board by the networks on Election Night, nor has it ever drawn much more than scholarly interest when it is compiled days or weeks after an election.

Yet this time, the Democrats’ nearly 1.4-million vote plurality in the House balloting had some extra resonance. The Democrats’ success in the nationwide House vote has helped undermine the Republicans’ contention that their ability to retain a House majority last November should match any mandate that Obama claimed for his presidential reelection. That argument is hard to sell given the “divided” House result.

The results have also drawn attention because the outcome was unusual. The party that wins the most House votes usually takes the most House seats. In 2004, for instance, Republicans emerged with a 232-to-202 advantage (with one independent) that was nearly identical to the present House lineup, yet the GOP had an edge of 3 million votes in the aggregate ballot count.

The question for the Democrats now is whether they can capture a House majority in even a favorable election year for them. Or given the geography and the cartography, is the best they can accomplish as the decade unfolds a few more moral victories in the nationwide congressional vote.

Note: Note: Obama also received 91% of the 2012 presidential vote in the District of Columbia, which is considered here as part of the Northeast. 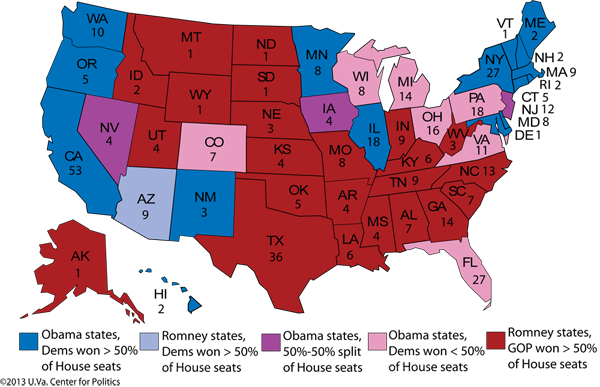 Note: The current number of House seats for each state is listed on the map.

Source: Vote totals are based on official results as posted on the election websites of the 50 states. Vote percentages are based on total ballots cast.