On March 31, we released our first general election map of the Electoral College. With our self-imposed rule of permitting no cop-out “toss-ups” — a rule we’ll try to hold to as we handicap this year’s Electoral College map — our bottom-line totals were 347 electoral votes for Hillary Clinton and 191 for Donald Trump. We’ve made modest changes since: Pennsylvania has morphed from Likely Democratic to Leans Democratic, while Virginia — after Tim Kaine was added to the Democratic ticket — went the other way from Leans Democratic to Likely Democratic. Arizona and Georgia went from Likely Republican to Leans Republican, and usually reliable Utah from Safe Republican to Likely Republican.

Today we add one further alteration: We are moving Colorado from Leans Democratic to Likely Democratic. This also does not affect the Electoral College total, though it does push a competitive state further toward Clinton. Public and private polling, plus our own survey of key Democrats, Republicans, and independent journalists suggests that the GOP is not very competitive in Colorado this year. That includes the Senate race too, which we are moving from Likely Democratic to Safe Democratic. Sen. Michael Bennet (D), a very close winner in 2010, should be able to run ahead of Clinton against an underfunded Republican opponent, El Paso County Commissioner Darryl Glenn, who national Republicans appear to have written off. 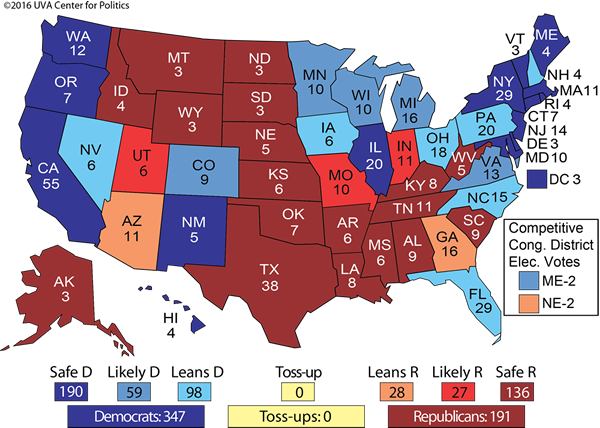 So look at the big picture. The Crystal Ball has been an island of stability in a chaotic, broiling sea. How can that be? Haven’t we been paying attention to the considerable shifts back and forth over the last month? Don’t we read the polls and other sites’ projections, which bounce up and down from day to day like yo-yos?

We do indeed closely follow the polls — or rather polling averages — and we appreciate the very fine work done by others in calibrating the impact of each new development on the campaign trail.

But our eyes are firmly fixed on November. In essence, we care about only one thing, the big picture: Who’s going to be elected?

You might ask: What about the wild swings in polling we observe with regularity, most recently after each convention? Some persuasive research has argued that it is explained by variability in the survey response rates of Democrats and Republicans. (See Andrew Gelman, et al., “The Mythical Swing Voter”). That is, short-term swings in candidate preference are caused mainly if not exclusively by variability in partisan response rates. Even small changes in response rates among Democrats and Republicans can produce sizable shifts in candidate support, given the very low overall response rates in most polls.

In our view, it is much more fruitful to focus on the electoral fundamentals and fixed elements of politics that predetermine most votes, especially partisanship, demographics, and strong forces shaping the political landscape. Polarization in this hyper-partisan era means that practically nine of 10 voters are committed, and the unknown is whether they can be motivated to cast a ballot. Presidential job approval, the state of the economy, war and peace, and a few other items reinforce partisanship and turnout, and influence the few truly swingable votes among hard independents.

This is especially true when the choices are as well-known as Hillary Clinton and Donald Trump. It’s not just their nearly universal name identification; most voters have strong opinions about both, and it is very difficult — even with a four-day infomercial like a national convention — to change basic attitudes about these candidates’ strengths and weaknesses.

Are there complications? Naturally. While we suspect support for the Libertarians and Greens will diminish as Election Day approaches, we cannot know this for certain. It is at least possible that the Clinton-Trump balance will be upset by Gary Johnson and/or Jill Stein. We’ll keep watching, especially in the unlikely circumstance that Johnson makes it into the fall debates (he’ll need to be averaging 15% in several national polls to be included, and right now he’s generally in the high single digits).

Whether Johnson is present or not, the debates always offer an opportunity for one candidate to shine or another to make a costly gaffe, though here’s where intense partisanship matters again. Voters can easily declare one candidate the debate winner but cling to their preference for the other contender. There is also enough time from the end of the last debate (Oct. 19) to the election (Nov. 8) for lingering debate effects to vanish.

We certainly aren’t denying that certain events could upend all predictions. A surprise recession (few if any predicted the September 2008 economic collapse, even a couple of months’ out) or terrible instances of domestic terrorism in the fall might cause just enough voters to throw up their hands and say, “Enough. We need a change even if we don’t much like the change!”

It’s essential to note that the love-hate feelings for Trump and Clinton are eye-popping, and this unusual factor may distort expectations. Trump in particular is such an outlier or aberration that many standard election models by political scientists may not be able to project the election results as well as they usually do.

Trump supporters turn this around and insist that many live-interviewer poll respondents are not admitting their preference for the GOP nominee because it is socially undesirable to be for Trump (the so-called “shy Tory effect” that is well documented in the United Kingdom). Maybe this is happening, though so far we see little difference between live-phone surveys, where a few Trump backers might hesitate to tell an interviewer who they support, and online polls, which don’t require the respondent to actually talk to someone when revealing their views.

The Crystal Ball will continue to gather as much data as possible about every state, and we constantly question our assumptions, with your help. We’ll be surprised if we don’t flip the ratings for at least a few states before November. We doubt very much the 2016 map will be a duplicate of 2012’s, but it is unclear which handful might choose a new color. Let’s not forget about NE-2 and ME-2, either, individual congressional district electoral votes that could vote differently from their states. The Nebraska district, which Barack Obama carried in 2008 but not 2012, is due some special scrutiny. And Maine’s expansive northern district — the biggest by size east of the Mississippi — is a dark horse Trump target.

The news media are obsessed with daily, or hourly, “game changers.” That is understandable, since their businesses depend on “breaking news” eyeballs and clicks from people convinced that absolutely everything matters.

The Crystal Ball is of the opposite view. Most things really don’t matter, or they just reinforce the fundamentals and partisanship already in place. And that, dear readers, is why you keep on seeing variations of the same old map on our site. We’re not always a one-note samba, yet sometimes it’s the best song to sing, especially if Frank Sinatra recorded it.

Maybe our map will change drastically, but at this early August writing, we’re not betting on it.