Editor’s note: This is an updated version of a story we previously published in June 2015.

The most commonly used method for analyzing the partisan nature of the redistricting process is the seats/votes relationship. For this analysis, a simple regression is used to relate the percentage of the two-party votes that the Democrats received to the percentage of the seats they won. The Pearson’s R2 tells us how strongly the allocation of seats is related to the votes received by each party. The slope of the regression line is called the swing ratio, and tells us how responsive the system is to changes in the vote. One can determine partisan bias by simply solving the regression equation for the situation in which the Democrats received 50% of the votes. At that level, they should also receive about 50% of the seats if the playing field is level.

Determining the percentage of the two-party votes received by Democratic candidates for the House requires attention to two questions. The first question is how to count elections in states that have majority vote requirements with runoff elections after November, and elections in which all the candidates in the November general election are in the same party, as can happen in the jungle-primary system used in California.  If the candidates in the final election were both in the same party, I counted the contest as unopposed for that party.

One way to deal with this problem is to substitute the vote of some other set of candidates in districts where the congressional candidate is unopposed. But on a nationwide basis, the only office available for that job is the presidency, and that is only available in half the congressional elections because House seats are contested every two years while the presidency is contested every four. Moreover, this is exactly the wrong office to use, because here is great variation in presidential and congressional voting. Votes for U.S. Senate or governor could be substituted into unopposed races, but this also has problems. Voters typically know more about candidates for these offices; only 33 or 34 of the states have a Senate election in any year; and nearly all governors now have four-year terms.

m = mean number of votes cast for both Republican and Democratic

v = proportion of the vote that unopposed candidates would

have received if they had been in an opposed contest

Gary Jacobson of the University of California, San Diego estimates the percentage of the vote that we would expect unopposed candidates would have received, on average, if they had been opposed (v in the formula) at 71% with a standard deviation of 10%. His analysis is based on the support that congressional candidates received in the election following or preceding the one in which he or she was not opposed.

With this calculation I derived the percentage of the two-party vote that the Democrats received in recent elections. These figures deviate little from other measures of the “total vote” without this adjustment. Over the years I have collected the data from a variety of reliable sources, most commonly the Clerk of the U.S. House. The data for 2016 comes from the Cook Political Report.

Table 1: Number of unopposed Democrats and Republicans running for Congress 1972-2016 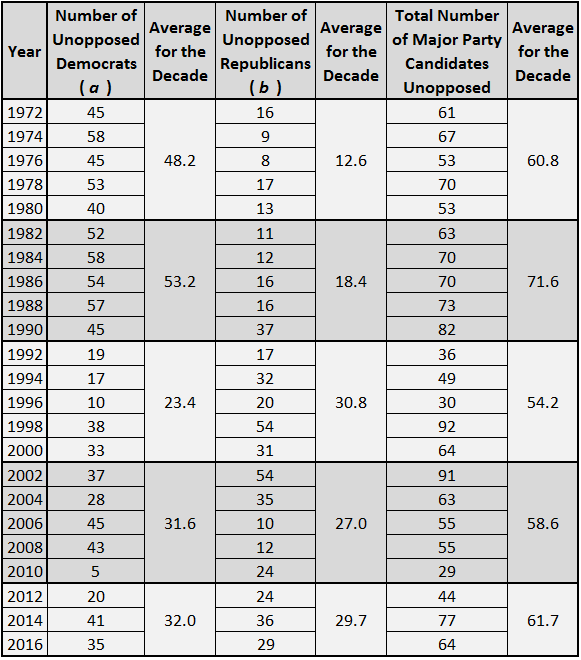 It is reasonable to count the nine elections in California in which Republicans failed to advance to the general election as unopposed Democratic districts for my calculations. If the Republicans are so weak in a district that no Republican can survive the jungle primary, then it is reasonable to count that district as being similar to other districts in which there is no Republican candidate in the general election. None of these elections in 2016 were the odd result of a jungle primary in which the Republican vote was split between a large number of candidates allowing two Democratic candidates to survive the jungle in a Republican-leaning district.

In 2016, both parties had about the same number of unopposed contests: 35 for the Democrats, and 29 for the Republicans. In this situation, my adjustment procedure makes little difference in the Democratic percentage of the two-party vote. 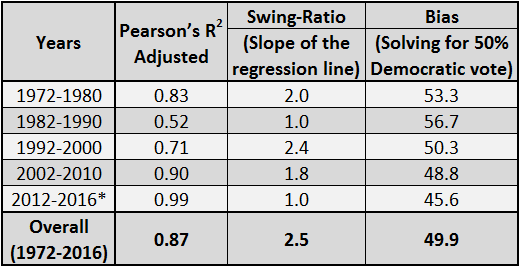 Table 2 shows the correlation, slope, and bias figures for the entire period and for each recent redistricting cycle. Figure 1 shows a scatterplot of this relationship during the entire period from 1972 to 2016, while Figure 2 shows the relationship during the 2012 to 2016 period. The Pearson correlations indicate that the allocation of seats is consistently related to the votes cast. For this entire period the swing ratio has been appropriately at or above 1.0, indicating adequate response to changes in the vote. Over the entire period, the system has had little partisan bias — a Republican advantage of only 0.1%, which is perhaps an additional one seat if the vote were evenly split. However, in the 1970s and 1980s, the Democrats had a sizable advantage, while in more recent elections this advantage has shifted from a very slight Democratic bias in the 1990s to a somewhat larger Republican advantage starting in 2002. Thus, the overall fairness statistics disguise substantial variation over time. 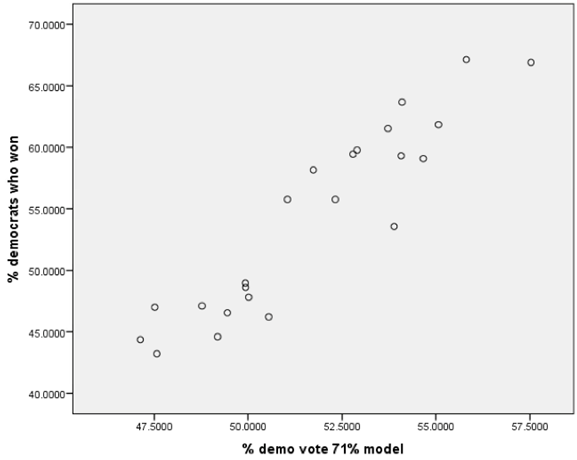 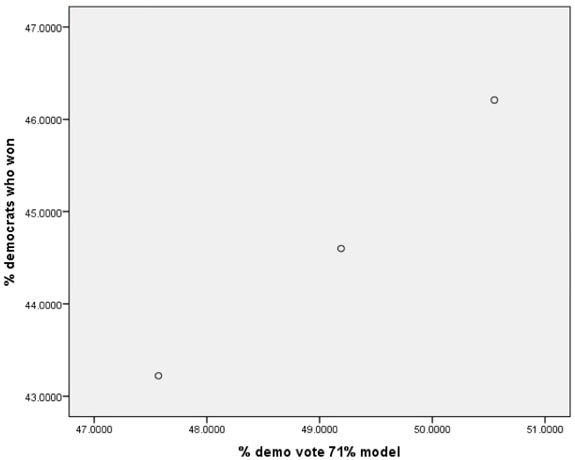 The Democrats would need to get 55% of the adjusted vote to win a majority of the seats, and that may not include any additional vote that would be necessary to overcome the larger number of Republican incumbents. This level of Democratic dominance is unlikely but possible. The Democrats received more than 55% of the adjusted vote only in 1974, 1976, and 1982. The 1974 and 1976 elections were reactions to Watergate. The 1982 election was a reaction to the Reagan conservative administration. Perhaps a reaction to the Trump presidency might give the Democrats the lift they need to retake the House.

The more recent Republican advantage may be due, in part, to the requirements of the Voting Rights Act (VRA) to create majority-minority districts, thus artificially packing the most reliable Democratic voters in a few districts. The high point of this requirement, however, was in the 1990s, when there was almost no partisan bias. Thus the VRA is not inconsistent with unbiased redistricting or even a pattern that has a small Democratic bias. To some extent, the bias may derive from the way in which Democratic and Republican voters are concentrated geographically, and not with the implementation of the Voting Rights Act per se. The power of incumbency also helps the Republicans in the post-2010 period when they have most of the incumbents. It is clear, however, that one cause of the current bias must be gerrymandering in several large states by Republican state legislatures and governors in the redistricting cycle following the 2010 census.

Table 3: Comparison of presidential and U.S. House vote in 2016 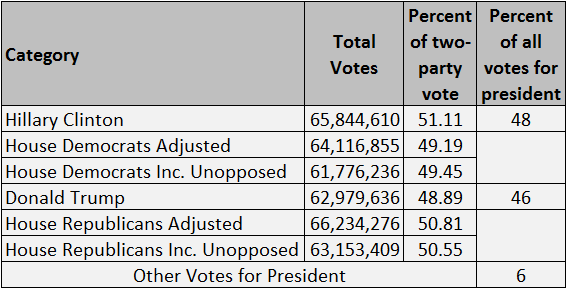 Hillary Clinton ran well ahead of Democratic candidates for the House. Looking only at the votes actually cast for the House (i.e., without adjustment), she led the ticket by over 4 million votes. Adjusting for unopposed contests, she leads the adjusted House vote by over a million and a half votes. On the other hand, Donald Trump ran about 200,000 behind the votes actually cast for Republican House candidates. The Trump vote was more than three million votes short of the adjusted Republican vote in the House. President Trump has no evidence from these data that he was responsible for the Republicans’ continued majority in the House. One could even speculate that he was responsible for the small net loss the Republican suffered. The Republicans in the House retained control without his help, or possibly in spite of it. Given that straight-ticket voting seems to have become more prominent in recent years, the gap between the Clinton and House Democratic vote is interesting and suggests some lines for further investigation based on polling information. But few definitive conclusions can be reached from these kinds of data, as a multitude of possible interpretations are possible.