Since the conclusion of the Republican and Democratic national conventions last month, pundits, political reporters, and ordinary Americans have, for understandable reasons, been preoccupied with developments in the presidential campaign. And the contest between Hillary Clinton and Donald Trump has certainly provided plenty of material for serious political observers as well as late night comics. With the presidential contest getting so much coverage in the national media, however, much less attention has been devoted to the critical battle for control of the next Congress. Regardless of the outcome of the presidential election, whether Republicans or Democrats control the House and Senate will have enormous consequences for the direction of the country and the ability of the next president to carry out his or her agenda.

So what should we expect in the House and Senate elections this year? A simple forecasting model based on three predictors — the number of Republican seats at stake in the election, support for the two major parties on the “generic ballot” question in national polls, and whether it is a midterm election under a Democratic or Republican president — yields fairly accurate predictions of seat swing in the House and Senate. The number of Republican seats at stake is a measure of exposure to risk: the more seats Republicans have at stake, the more seats they are likely to lose. The generic ballot, based on polls asking voters whether they would prefer a Democratic or Republican candidate for the U.S. House without naming the actual candidates, is an indicator of the national political climate. Finally, the midterm election variable indicates whether an election is a Republican or Democratic midterm. There is a strong tendency for the party holding the White House to lose seats in midterm elections. However, 2016 is a presidential election year, so the midterm variable is not relevant. 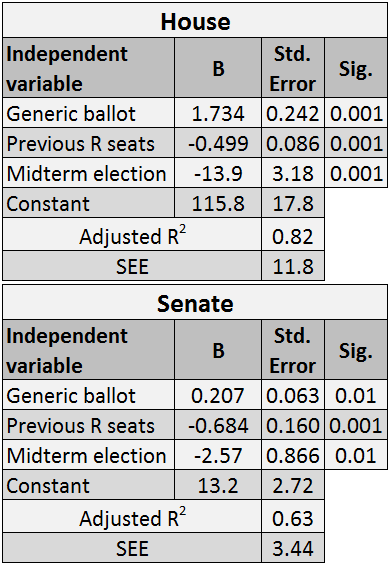 Two of the three predictors in this model are already set for the 2016 election. We know that Republicans will be defending 247 of 435 House seats and 24 of 34 Senate seats this year, and we know that 2016 is a presidential election year so the midterm variable does not favor either party. The only unknown for 2016 is the value of the generic ballot variable. Table 2 therefore presents conditional forecasts for House and Senate seat change based on values for the generic ballot variable ranging from a two-point Republican lead to a 14-point Democratic lead.

Table 2: Conditional forecasts of change in Republican seats in House and Senate 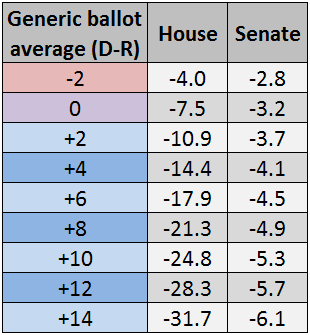 According to HuffPost Pollster, results of recent national polls give Democrats an average lead of five points on the generic ballot. If that lead were to hold up until the week after Labor Day, the traditional cutoff date for the generic ballot forecast, Democrats would be expected to gain about 16 seats in the House and about four seats in the Senate — not enough to flip control of the House but enough to flip control of the Senate if Clinton wins the presidential election.

Of course any forecasts based on a statistical model are subject to a margin of error. In this case, the results in Table 1 indicate that if Democrats maintain a five-point lead in the generic ballot, they would be very likely to pick up between six and 26 seats in the House and between two and six seats in the Senate. They would have about a 50% chance of regaining control of the Senate (if there is a Democratic vice president) but less than a 15% chance of regaining control of the House.