The results of recent national elections in the United States have followed a clear pattern: Democrats have dominated presidential elections while Republicans have dominated congressional and especially House elections. Since 1992, Democratic candidates have won four of six presidential elections and the popular vote for president five times out of six. At the same time, Republicans have won a majority of seats in the House of Representatives in nine of 12 elections and a majority of seats in the Senate in six of 12 elections. As a result, Democrats have controlled both chambers of Congress for only six of the past 22 years.

This pattern of Democratic domination of presidential elections along with Republican domination of congressional and especially House elections represents a complete reversal of the pattern that prevailed during the previous four decades. Between 1952 and 1988, Republican candidates won seven of 10 presidential elections. Meanwhile, Democrats held a firm grip on Congress during this time period. Indeed, Democrats won a majority of seats in the House of Representatives in 18 of 19 elections and a majority of seats in the Senate in 15 of 19 elections. For 30 of the 38 years in question (1953-1991), Congress was under complete Democratic control.

That the contemporary scene in American politics is a mirror image of its previous self raises an important set of questions: how and why has this happened? A number of scholars and pundits have pointed to partisan gerrymandering by Republican-controlled state legislatures in the aftermath of the 2010 midterm election as the key to the recent GOP “lock” on the House. But Republican success in House elections actually began well before 2012. Moreover, our analysis of the party tilt of House districts based on presidential voting patterns reveals that Republicans have long enjoyed an advantage in the number of districts that favor their party. Figure 1 shows this trend. 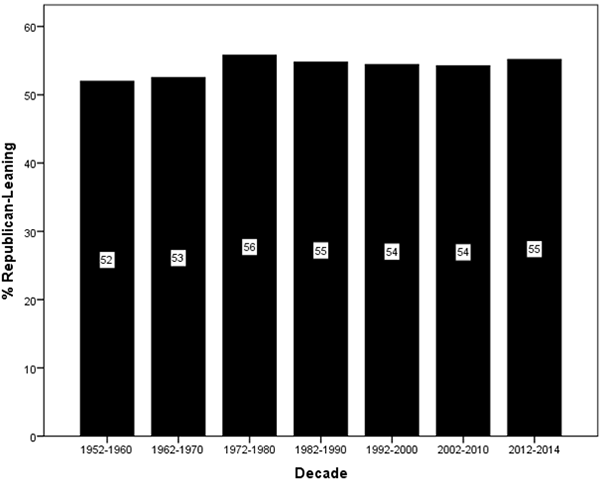 Figure 1 clearly shows that the proportion of districts favoring the GOP based on presidential voting patterns — those that are more Republican than the national average — has consistently been greater than 50%. Furthermore, recent Republican gains due to redistricting have been minimal. According to our calculations, Republicans gained an additional eight districts that tilted toward their party as a result of post-2010 redistricting. While this gain of eight GOP-leaning districts was important, it is not the main reason that Republicans have enjoyed a “lock” on the House of Representatives in recent years.

Our analysis indicates that the recent Republican “lock” on the House of Representatives is best explained by the inefficient distribution of Democratic voters combined with a new phenomenon in American politics — the rise of strong partisanship. Strong partisanship refers to a situation in which the partisan identities of voters are strongly related to other salient and political characteristics. When this happens, supporters of each party perceive supporters of the opposing party as very different from themselves in terms of their social characteristics and fundamental values. And one doesn’t have to be a strong party identifier to be a strong partisan. Even weak party identifiers and independents who lean toward a party can be strong partisans based on their attitudes toward the opposing party’s leaders and supporters and, most importantly, their behavior.

The rise of strong partisanship has had important consequences for voter decision-making. A growing proportion of voters associate the opposing party with groups whose motives are suspect and policies that threaten the survival of American democracy. This has led to a marked decline in cross-party voting and ticket-splitting. However, the decline has affected Democratic and Republican voters differently, as the results in Figure 2 show. 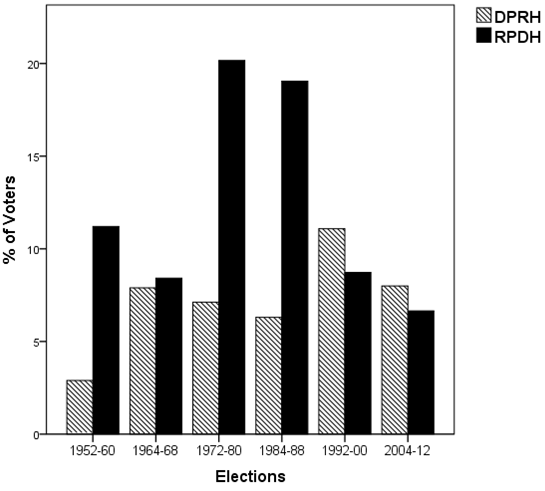 Cross-party voting patterns and asymmetric ticket-splitting help to explain why Democrats dominated House elections between the 1950s and the 1980s despite the fact that there were more Republican-leaning districts than Democratic-leaning districts based on presidential voting patterns. During those years, many Republican-leaning districts were electing Democrats to the House. However, a sharp decline in cross-party voting and asymmetric ticket-splitting has resulted in a dramatic increase in the success of Republicans in House elections since 1992.

This decline in asymmetric ticket splitting means that Republican candidates are now winning in a much larger proportion of House districts than tilt toward their party in presidential elections. It is the growing ability of Republicans to convert their advantage in presidential partisanship into House seats that largely explains why the GOP has dominated recent House elections. 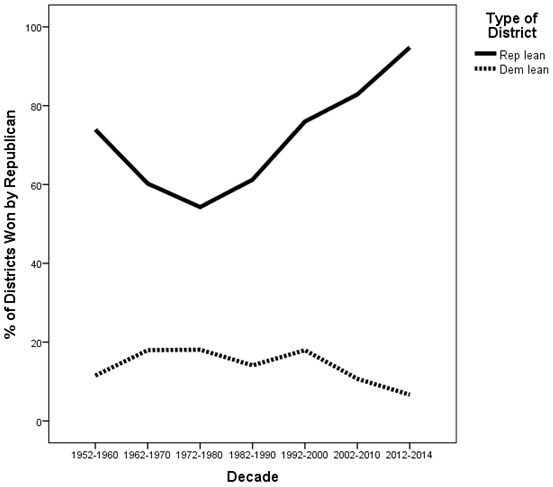 The rise of strong partisanship has important implications for the future of House elections and for congressional politics. First, our results suggest that the Republican “lock” on the House of Representatives is likely to persist for some time. Strong partisanship means that voters are increasingly unlikely to cross party lines. This means that given the GOP’s structural advantage in the distribution of presidential partisanship, it appears unlikely that Democrats will be able to retake control of the House of Representatives any time soon unless there are very strong short-term forces favoring them as in 2006 and 2008.

In addition to making election outcomes more predictable, the rise of strong partisanship and the growing nationalization of American politics have had important consequences for representation in Congress. The growing proportion of districts that strongly favor one party combined with the increasingly partisan behavior of the electorate mean that representation of constituents’ policy preferences is almost entirely limited to partisan representation. There is no incentive for most members of Congress to consider the views of supporters of the opposing party. They are unlikely to win many of their votes and they generally do not need their votes. As a result, most Republicans are only concerned about the preferences of Republican voters in their districts, and most Democrats are only concerned about the preferences of Democratic voters in their districts.

The rise of partisan representation has had a substantial impact on the legislative process within Congress. While earlier work in political science found that divided party control of government did not lead to a decline in legislative productivity during the first few decades after World War II, our results suggest that this is unlikely to be true in the current era of intensified partisan polarization. Most members of Congress have little reason to be concerned with “reaching across the aisle” to work with leaders and members of the opposing party. In fact, doing so can actually be risky to one’s political career. With divided government likely to be a frequent occurrence and little or no incentive for bipartisan compromise, our findings suggest that confrontation and gridlock are almost certain to characterize the policy-making process in Washington for the foreseeable future.