Recent presidential elections in the United States have been characterized by sharp divisions between Democrats and Republicans on a wide range of issues along with high levels of party loyalty and straight-ticket voting. Voting patterns in these elections have been very stable — the same voter groups and the same geographic areas have consistently supported either the Democratic candidate or the Republican candidate. Democratic candidates have depended heavily on younger voters, nonwhites, and single women while Republican candidates have depended heavily on white voters — especially southern whites — as well as married men, those over the age of 60, and those without college degrees. Overall, 40 out of 50 states voted for the same party in all four elections between 2000 and 2012.

But none of these elections involved a major party nominee like Donald Trump — an insult-hurling businessman who has never run for elected office, has no longstanding ties to the Republican Party, and who has regularly attacked the party’s established leadership including its most recent president and its two most recent presidential nominees. Since Trump’s emergence as the favorite to win the Republican nomination, there has been considerable speculation about whether his candidacy could result in major shifts in the voting patterns that have characterized recent elections.

The ultimate answer to this question will have to await the November election. However, data from a survey conducted earlier this year allow us to draw some tentative conclusions about the likelihood of major shifts in voting patterns. In this article I analyze data from the 2016 American National Election Study Pilot Survey, an online survey of 1,200 voting-age Americans conducted between Jan. 22-28, 2016. Results presented in this article are based on approximately 750 respondents who identified with or leaned toward one of the two major parties and who indicated that they were registered to vote.

Although the ANES pilot survey was conducted in January, before the Iowa caucuses, Trump had already emerged as the clear frontrunner for the GOP nomination — 39% of registered Republican identifiers and leaners favored Trump in this survey. Ted Cruz was a distant second with 17% support and Marco Rubio was third with 12% support. On the Democratic side, Bernie Sanders had already established himself as a serious challenger to frontrunner Hillary Clinton: Clinton led Sanders by 52% to 37% among registered Democratic identifiers and leaners.

The first question I will address is whether Democratic and Republican voters remain sharply divided on major issues. I will also examine whether there were substantial divisions on major issues between supporters of different candidates within each party and whether these intra-party divisions were larger or smaller than the inter-party divisions. I examined voters’ opinions on three types of issues — economic issues, cultural issues, and racial issues. The economic liberalism-conservatism scale was measured by three questions — one on spending for child care, one on spending for health care, and one on raising taxes on upper-income households. The cultural liberalism-conservatism scale was measured by two questions — one on whether religious organizations should be allowed to opt out of providing coverage for contraceptives for their employees and one on whether businesses providing wedding services should be able to refuse service to same-sex couples. Finally, the racial liberalism-conservatism scale was based on four questions measuring symbolic racism or racial resentment that have regularly been asked in ANES surveys. 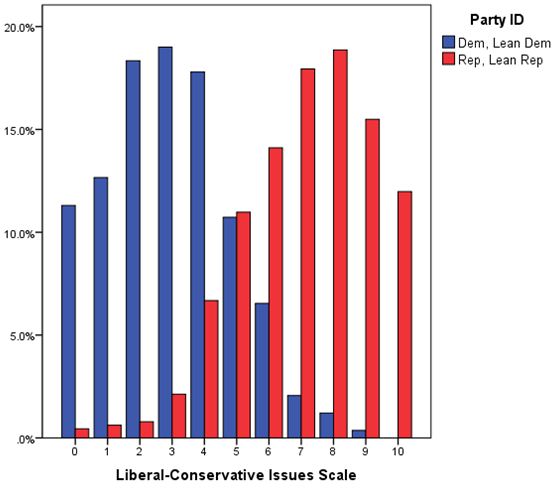 Recent studies have shown that in addition to being sharply divided on policy issues, Democratic and Republican voters are sharply divided in their feelings toward the political parties and their leaders. Since the 1990s, affective polarization has increased along with policy polarization. Supporters of each party now have much more negative feelings about the opposing party and its leaders than in the past, which has contributed to increasing party loyalty and straight-ticket voting in elections.

Note: Thermometer ratings range from 0 to 100

If the analysis presented in this article is correct, we would expect group voting patterns in the 2016 presidential election to be very consistent with group voting patterns in the 2012 presidential election. As a preliminary test of this claim, we can examine the relationship between group voting preferences in a recent national poll with those from the 2012 national exit poll. Figure 2 displays a scatterplot of these results. The data for 2016 come from a CNN/ORC national poll from June 16-19. 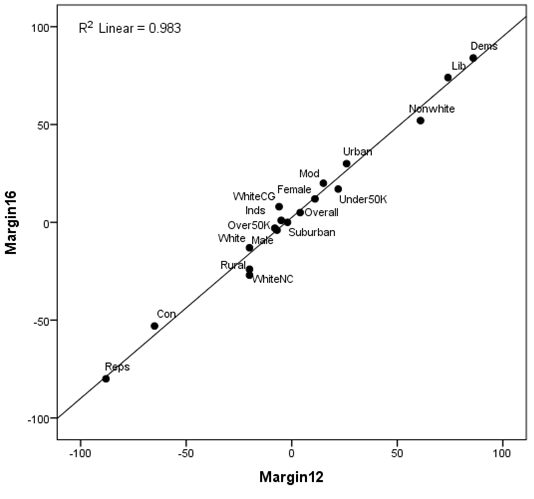 The 2016 presidential campaign has already produced many unexpected developments, none more surprising than the fact that Trump was able to overcome a large field of experienced candidates and intense opposition from almost the entire GOP establishment to become the presumptive Republican nominee. Trump’s highly unusual background, personality, and unorthodox views on certain issues have led to considerable speculation that his nomination could upset normal voting patterns by producing high defection rates among some groups of Democratic and Republican identifiers and putting new states in play in November.

No definitive conclusions about how Trump’s candidacy will affect voting patterns in the 2016 presidential election can be reached until after the results are known. However, an examination of data from the 2016 ANES Pilot Study strongly suggests that claims by some pundits and political scientists that Trump’s candidacy could result in very different voting patterns from those seen in recent presidential elections are probably mistaken. These data show that the American electorate remains deeply divided along party lines. Democrats and Republicans, including independents who leaned toward each party, differed sharply on economic, cultural, and racial issues. Moreover, Democrats and Republicans, including Sanders Democrats and non-Trump Republicans, held strongly negative feelings about the opposing party’s likely nominee.

Based on these findings, voting patterns in the 2016 general election should closely resemble those seen in recent presidential elections. Overwhelming majorities of party identifiers and leaning independents are likely to support their party’s nominee. As a result, the large majority of states are likely to support the same party as in 2012: states that were strongly Democratic in 2012 will probably remain strongly Democratic in 2016, states that were strongly Republican in 2012 will probably remain strongly Republican in 2016, and states that were battlegrounds in 2012 will probably remain battlegrounds in 2016. It seems that when it comes to presidential elections, the more things change, they more they remain the same.