To slightly modify Ronald Reagan’s famous rejoinder to Jimmy Carter in their single debate in 1980 (“There you go again”), here we go again — into the debate season.

There has been at least one televised presidential debate every four years for four decades now. The streak began in 1976. Every four years, the debates seem very important. Whether they are or not is open to, ahem, debate.

Mitt Romney experienced an apparent surge in support after the first debate in 2012. He got a number of positive polls after his strong performance (and President’s Obama’s widely-panned showing). However, as we’ve mentioned before, it seems likely that Romney just re-energized his supporters while Obama’s backers became less enthusiastic, and that created what seemed like movement in the polls when there actually wasn’t much. It’s possible that Hillary Clinton’s poor polls over the past few weeks are representative of a similar phenomenon, and that she can use the debate to give her backers a needed jolt. Or perhaps we’re dealing with an unprecedented phenomenon here and Donald Trump can use the debates to take a national lead.

Clinton needs to persuade younger voters (who are disproportionately liberal) to jump on board instead of backing third-party candidates, and she also needs to pull a few percentage points worth of anti-Trump Republicans toward her. Doing both of those simultaneously might be difficult, if not impossible: Appealing to the young probably means tacking left, while going after moderates and anti-Trump Republicans probably means going to the middle. One advantage for Clinton is that she has much more experience with the issues than Trump does and is far more fluent on policy.

Trump, meanwhile, still has some work to do on unifying the GOP base. The vast majority of Republicans are with him, but there are holdouts, particularly in the wealthy, well-educated suburbs. This speaks to a larger Trump issue: Majorities of the public still don’t believe he’s qualified for the job. With exceptions, Trump has been on modestly better behavior of late, and it’s possible that he’ll seem more presidential so long as he is coherent and doesn’t say anything totally outrageous. Given the intensity of his supporters, he has some room to maneuver to the middle — at least in terms of style, if not substance — without losing his core base. Whether he’s able to do it is another question, and Trump’s lack of policy specificity and knowledge can be a real handicap. We suspect Trump will get graded on a curve by some, though, and his campaign is more about attitude than specific policy details.

While there isn’t an incumbent in this debate, Clinton might as well be, given how long she’s been in the public eye and because she’s effectively running for Obama’s third term. Trump, who is basically playing the role of the challenger, might appear more presidential just by appearing on stage. There’s some evidence that past challengers, like Walter Mondale in 1984, John Kerry in 2004, and Romney in 2012, all were aided by simply sharing a stage with the president (although they all eventually lost to incumbents).

One challenge for Trump, and potentially an advantage for Clinton, is that this is the first time he will be engaged in a one-on-one debate. While he participated in many primary debates, the smallest number of candidates on stage at any of them was four. Meanwhile, Clinton and Bernie Sanders clashed by themselves five times in 2016, and Clinton also faced off against just Obama four times in the 2008 Democratic primary. A major theme of the GOP debates was Trump often escaping harsh criticism because of the mistaken belief among his rivals that they needed to attack each other rather than the frontrunner. At times during the primary debates, Trump disappeared when policy specifics dominated the conversation, taking advantage of the other candidates’ desire to talk to avoid potential flubs. He will not have that luxury in a head-to-head contest. How he handles this reality will be something to watch for.

Both Trump and Clinton will try to make voters afraid of the other, a useful unification tool we’re deeming FOT vs. FOH (“Fear of Trump” versus “Fear of Hillary”).

Looking at polling changes before and after the first presidential debates in the past, the impact of the debates has varied in the immediate aftermath. Table 1 shows two-party polling data from 1960 to 2012 before and after the first debate. The information is based on data collected by Robert Erikson and Christopher Wlezien for The Timeline of Presidential Elections. For easier comparisons across time, the data exclude third-party and independent candidates’ percentages. 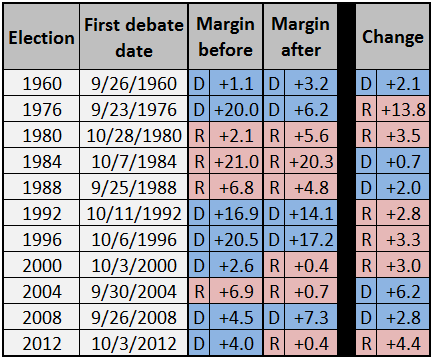 Source: Data collected for The Timeline of Presidential Elections

Generally speaking, the polls usually move at least a couple of points in one direction or the other after the first debate. The 1976 meeting between Jimmy Carter and Gerald Ford appears to have significantly influenced the polls. But there is a very large caveat to that data point: There was no polling in the three weeks prior to the debate. Given the trajectory of the 1976 race, it’s very likely that the race had already narrowed before the first debate occurred.

Perhaps the one year where the first debate can be argued as having been consequential is the 1980 edition. But of course that was the only debate between Ronald Reagan and Jimmy Carter, making it unique in presidential contests that have had debates — most have had two or three between the two major-party nominees, with the John F. Kennedy-Richard Nixon race featuring four. And the Reagan-Carter clash happened just one week before Election Day, magnifying its importance. The debate went on to feature two classic debate moments: Reagan’s famous line against Carter that we mentioned above — “There you go again” — and Reagan’s defining question for the American people: “Are you better off than you were four years ago?” The debate is sometimes seen as pivotal in catapulting Reagan ahead of Carter in that election.

But the truth is less dramatic: Reagan was already leading in the race at that time. The 1980 polls are shown in Chart 1, which John Sides of The Monkey Cage created using the Erikson/Wlezien data. 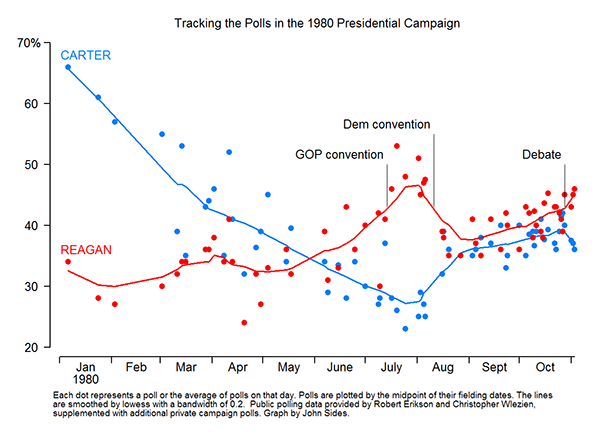 As you can see, Reagan took a big lead in the summer and, while the race got much closer in the fall, he really was not trailing going into the debate (this chart uses a combination of public polling as well as private campaign surveys). Considering the circumstances in the 1980 election (-7.9% GDP growth in the second quarter, the Iran Hostage Crisis negotiations falling apart right before Election Day, stagflation, etc.), there was clearly more than a debate working against Carter. Did the debate help Reagan? Probably. But did it single-handedly elect him? Certainly not. Even without a good debate performance, Reagan had so much going for him that year that he likely would have won.

When looking at the pre- and post-debate polls, it’s important to remember that correlation does not necessarily equal causation. In every election there are myriad factors that voters must consider before choosing their candidate, and a debate performance is unlikely to be the first thing on a voter’s mind when he or she enters the voting booth — particularly because, in recent years including this one, the last debate is two weeks before the election.

In their book, Erikson and Wlezien review voter intentions before and after the debates. For the most part, their findings indicate that while the debate period is more volatile than other parts of the fall campaign, these clashes don’t have a dramatic effect on voters’ choices and that conventions are more important than debates in determining the course of elections. They also note that it is unclear whether debates are more impactful than other events in the final stretch of the campaign season.

In the 11 previous elections that have featured televised debates, it seems to us that there were three years when the outcome might have been different if not for the debates: 1960 and 2000 (those elections were so close that it’s possible that any number of factors, including the debates, was decisive in the outcome); and 1976, when Gerald Ford’s “There is no Soviet domination of Eastern Europe” mistake in that year’s second debate arguably stalled his big fall comeback, dooming him to a narrow loss to Carter. (Several decades ago, one of us examined the private campaign polls for President Ford, taken by Robert Teeter during October 1976, and they clearly showed the severe impact that the “free Poland” gaffe had on Ford’s chances.) Erikson and Wlezien, for their part, don’t really believe that Ford’s comments affected the polls. Reasonable minds can disagree on this and, as noted in regards to 1960 and 2000, in a close election, victory or defeat could hinge on any number of developments.

Given the interest in this campaign, we suspect that viewership for the first debate will be quite high, but you probably shouldn’t believe pre or post-debate surveys that indicate the vast majority of voters intend to watch or did watch the debate. A study by Markus Prior of Princeton University noted that self-reported debate audiences are about twice as large as Nielsen estimates, meaning that many people who say they watch the debates actually don’t. Our guess is that many voters know they should watch the debates even though they don’t — so they cover for themselves by equating news reports they see about the debates with actually “watching” them.

Ratings for the first debate have generally declined over the years, mirroring broader trends of declining viewership for most kinds of programming because of increased entertainment options. With hundreds of channels to choose from — not to mention on-demand options — it’s not hard to find alternate viewing. Nevertheless, as Table 2 shows below, Nielsen found that the first debate in 2012 was watched by markedly more people than in 2008, with figures more in line with 2004. Still, whereas the equivalent of half the voting-age population watched the lone 1980 debate, only a little more than a quarter did so in 2012. 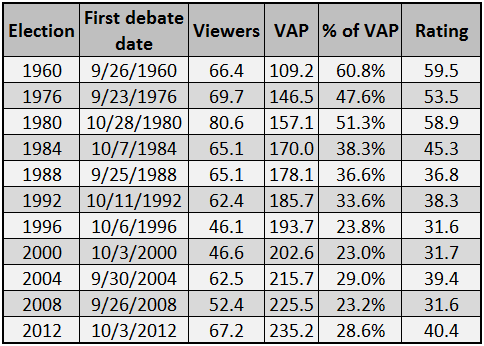 Notes: VAP is voting-age population. Viewers and VAP are in millions of persons. Ratings indicate the percentage of households that watched the debate.

Very rarely does our University of Virginia Center for Politics wander into advocacy, but on certain limited subjects we do. Last week, the Center and more than 60 other organizations signed on to a suggested set of debate standards for the candidates, moderators, and audience members produced by the National Institute for Civil Discourse, which was created at the University of Arizona following the fatal shootings in Tucson that severely injured former Rep. Gabrielle Giffords (D) in 2011. You can read the standards here.

Furthermore, there is a special burden on the moderators this year. This election, and particularly the case of Donald Trump, has brought into question the “he said, she said” model of modern campaign journalism, as Peter Beinart recently noted in The Atlantic. Hillary Clinton has made plenty of misstatements and uttered lots of half-truths, but Trump has the record in both categories, according to nonpartisan fact-checkers. We believe that the moderators should not be passive in pushing back on statements from either candidate that are just not true.