At first blush, Saxby Chambliss and the Michigan right-to-work episode seem completely unrelated. Most Republicans approve of both, of course, but there is a deeper connection. The Georgia senator and Michigan’s effort to restrict organized labor’s power are both byproducts of a phenomenon that, despite the electoral problems currently facing Republicans, continues to favor the GOP: severe ballot turnout drop-off in non-presidential elections.

On Nov. 4, 2008, Chambliss received 49.8% of the 3.75 million votes cast statewide in Georgia; Democrat Jim Martin finished second with 46.8%, three points behind. Because Chambliss fell two-tenths of a percent shy of the absolute majority required, however, Georgia law required a run-off. Four weeks later on Dec. 2, Chambliss crushed Martin by 14.8% — nearly five times his November margin. Only 2.14 million votes were cast in the run-off, 43% fewer. High turnout in November — driven, no doubt, by African-American voter enthusiasm, given Obama’s presence on the ballot — kept Martin competitive; far lower turnout in December doomed the Democrat’s chances in the run-off.

Two years later, Republican Rick Snyder easily won the Michigan governor’s race with 58.1% of 3.23 million votes cast statewide. His victory was sandwiched between the 2008 and 2012 presidential elections in which Obama won 57.4% and 54.2%, respectively, of the 5 million and 4.73 million votes cast. This zig-zagging effect of voter drop-off between Michigan presidential and gubernatorial cycles is clear: For the past 60 years, turnout as a share of the state’s voting-age population typically ranged between 55% and 65%, but fell into the mid-40% range during congressional cycles.

Of the 38 states with four-year state senate terms, Michigan is also one of but 10 that elects all its state senators in non-staggered elections during midterm cycles. That means none of Michigan’s 38 senators ever stands for election or reelection during higher-turnout presidential cycles. In 2010, Michigan Republicans increased their majority by four seats, from 22 to 26. The story of recent House results, held every two years for all 110 seats, is much different: The Democrats won a majority of 65 seats in 2008, lost a net of 18 seats and their majority in a landslide defeat to the Republicans in the 2010 midterm cycle, then recaptured a net of four seats in 2012. All else equal, presidential cycles favor Michigan Democrats and thus the absence of any presidential-cycle gubernatorial or state Senate elections advantages Michigan Republicans.

The Chambliss and Michigan cases are just two of countless examples of the partisan effects of drop-off. Despite recent presidential success not enjoyed since the days of FDR, unified control of Washington has eluded the Democrats, who also hold a minority of governor’s seats and state legislative chambers. The key question the party faces is this: How can it find ways to deploy its demonstrable advantages in field mobilization and turnout tactics to elections held other than on the first Tuesday every fourth November?

“Drop-off” is the political science term for the decline in turnout between the high-water benchmark of presidential elections and other electoral moments: midterm elections for both chambers of Congress; state and local elections for governor, state legislature, county officers and various municipal officials held in non-presidential years, including the five states (Kentucky, Louisiana, Mississippi, New Jersey and Virginia) that hold odd-number-year gubernatorial and legislative elections; and ballot measures voted upon in non-presidential cycles. As the Chambliss example demonstrates, there can also be a drop-off effect within presidential years in states that require post-November run-off elections.

Drop-off should not be confused with “roll-off,” a related phenomenon in which a smaller number of votes are typically cast for lower-ballot offices during the same election. For example, if 100 voters turn out in a precinct, and 98 of them cast votes in the presidential race but only 92 do for a U.S. Senate contest, the net difference of six is roll-off. In very tight down-ballot races, roll-off can matter. But the focus here is on the far more significant effects of drop-off, specifically the consistent and reliable turnout differences between presidential and midterm cycles (alternatively known as “congressional” or “off-year” cycles). 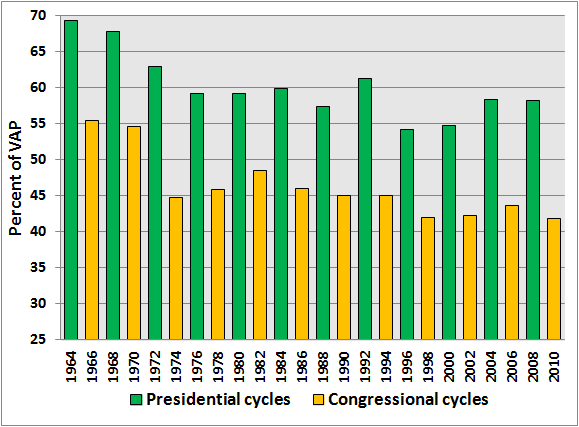 Turnout rates historically move in tandem, with higher turnouts in both presidential and midterm cycles during the 1960s steadily declining before ticking up slightly during the past decade. So it’s instructive to pair midterm turnouts with either the preceding or subsequent presidential cycle. And in which recent midterms was drop-off greatest compared to the preceding presidential cycle? The 2010 and 1994 cycles — the most successful cycles for Republicans in the past six decades. The GOP captured both chambers of Congress in 1994, and in 2010 flipped the House and made key Senate gains that might have been still greater had Republican primary voters not nominated far-right candidates in Colorado, Delaware and Nevada.

It’s no mystery why Democrats generally perform better in presidential years while Republicans tend to excel in midterm cycles: Lower midterm turnouts tend to skew the electorate toward older, white and/or more affluent voters. Given the growing cleavage in recent decades between partisan preferences of white and non-white voters, cyclic differences in racial composition are particularly important.

Since the Census Bureau began collecting data on voting age turnout by race in 1980, white voter turnout is consistently higher in both presidential and midterm cycles. But the racial gap in presidential cycles post-1980 is consistently smaller than the gap in midterm cycles from 1982 onward. The gap is small but significant between non-Hispanic whites and blacks, but much more dramatic between non-Hispanic whites and Hispanics. This overall pattern may be changing, however: For voters under 45, and especially those under 25, and in both midterm and presidential cycles, in the past decade the white/black racial turnout gap has either disappeared or even flipped to a slight turnout advantage for African Americans.

Can drop-off be mitigated?

So what, if anything, can Democrats do to drive up turnout in non-presidential cycles?

“There is little to nothing Democrats can do to mitigate the drop-off of turnout among their core constituencies that regularly happens — like a clock — when moving from presidential to midterm elections. Indeed, the primary way to stimulate midterm voters who do vote to support Democrats will not be present in 2014: a poorly performing Republican president that Democrats can rally against (e.g., Bush 2006 or Nixon 1974),” George Mason University’s Michael McDonald, one of the nation’s foremost experts on electoral turnout, explained to me via email. “The first step for Democrats is to prevent 2014 from becoming a self-fulfilling prophesy by recruiting quality candidates to run.” McDonald says Democrats will have to look to new strategies, including social media applications. “But, I caution that social media will likely not solve the Democrats’ problems since it failed to prevent the historic Republican landslide in 2010.”

I then asked Sasha Issenberg, author of The Victory Lab, a critically-acclaimed book about the rising sophistication of electoral field campaign strategies and techniques, how Democrats, who presently enjoy a field mobilization advantage, might “presidentialize” midterm elections. “In the last decade, Democrats have gotten much better at using field experiments to understand the mechanics of mobilization and data to target their efforts to parts of the electorate where they can have the greatest impact. There is a persistent difference between midterm and presidential elections, though: activist engagement, especially among the volunteers who do the work of mobilization,” Issenberg said. “So we may be missing a step here. The primary challenge for Democrats may not be how to mobilize blacks and Hispanics to vote in off-year elections the way they do in presidential cycles, but how to motivate them to volunteer at those levels — because it’s that activity that we know will turn their neighbors out to vote.”

By constitutional design, half of all (non-special) U.S. House and Senate races occur in presidential cycles, the other half in midterm cycles. All but nine of the 48 governors with four-year terms are elected in non-presidential cycles, as are the substantial majority of state legislators. The political and policy effects of drop-off are impossible to fully document, but surely the U.S. Senate would look different if all 100 senators served four-year terms elected simultaneously with the president, or if a majority of governors and state legislators were, too. The staggered timing of elections is not going to change, however. So if they hope to maximize the latent power of the so-called “rising electorate,” Democrats will need to employ new strategies to compel voters who disappear when the presidency isn’t on the ballot to show up rather than drop off.