Voters who supported President Donald Trump in last year’s election have few regrets as Trump enters his 100th day in office this weekend, although his support is not uniformly firm. A new University of Virginia Center for Politics poll of Trump voters shows his approval rating at 93% with these voters, though just 42% “strongly approve” while 51% “somewhat approve.”

The poll, conducted for the Center by Public Opinion Strategies, surveyed 1,000 Trump voters online from April 17-19 and has a margin of error of ±3.1 percentage points. Public Opinion Strategies also conducted eight focus groups in five locations from April 4-18 with both Trump voters as well as Republicans and independents who voted for Hillary Clinton or for a third-party candidate.

Some highlights from the poll and focus groups include:

— Respondents generally believed the country was headed in the right direction (70%) as opposed to being on the wrong track (22%), and two-thirds believed the economy has been improving since Trump took office. Yet the focus group respondents frequently expressed concern about how things in the country are going, using words like “terrible,” “upheaval,” “polarization,” “chaotic,” and “volatile” to describe the state of the country. 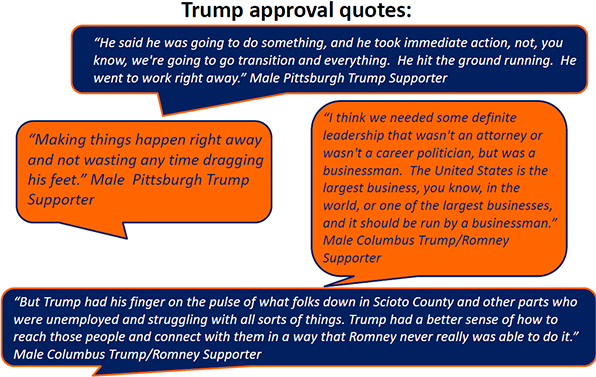 — To the extent that Trump voters expressed concern about the president, they worried about his tweeting. Nearly one-fifth of respondents (19%) cited “Twitter” as the top reason they feel unsure about their vote for Trump (the next most mentioned reason was the failed repeal of the Affordable Care Act, or “Obamacare,” at 11%). Respondents were mixed on whether they approved of his tweeting (55% approved, 45% disapproved). Younger voters tended to be more approving of Trump’s tweets than older ones. “This thing with the tweets, you know, he just shoots from the hip, and then he has to back up from it,” said one focus group participant in Pittsburgh. 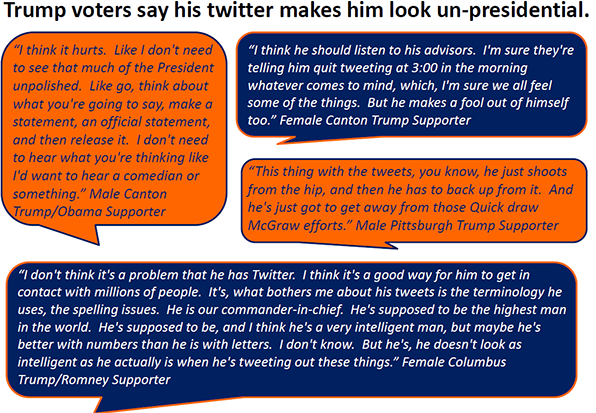 — One in five (20%) reported voting for Barack Obama at least once, and Trump’s approval rating was not quite as strong with these respondents (86% approve, 14% disapprove) as it was with the 80% of respondents who said they never voted for Obama (94%-6%).

— Close to three-quarters of respondents (72%) believed that building a wall on the border with Mexico was at least “somewhat” important to them. However, given the choice to spend money on either building the wall or “fixing health care,” two-thirds preferred spending the money on health care.

— More than half (57%) said their vote for Trump was more a vote for him than against Hillary Clinton, while 43% said their Trump vote was more against Clinton than for Trump. Only 10% of respondents said they made up their minds after the Republican convention — the others said they made up their mind before then — although these later-breaking voters may have made the difference in the razor-thin results in some of the crucial swing states. “I thought it was funny when he announced he was running for president, to be honest with you,” said one Trump voter in a focus group in Oak Creek, WI (Greater Milwaukee) who had previously supported Barack Obama. “Yeah. I really chuckled. I was like is this seriously who we have to vote for?”

— Only 5% of respondents said that Trump was the most responsible for the failed initial attempt to repeal and replace the Affordable Care Act. Roughly half (48%) blamed Democrats, while the remainder blamed House Speaker Paul Ryan (12%), moderate Republicans (15%), or the conservative House Freedom Caucus (21%). Overall, about four in five respondents (81%) approved of House Republicans, but only 20% strongly approved (61% “somewhat” approved). Further complicating Trump and the Republicans’ calculations on the Affordable Care Act is that a not-insignificant portion of respondents — 26% of those surveyed — reported that they or their families would be hurt by making changes to Obamacare. The remaining three-quarters (74%) said that they and their families would be helped by making changes to the ACA.

— While there has been much focus on the reactions of Clinton voters to the 2016 election outcome, Trump supporters were elated and pleased by it. Overall, 38% of respondents expressed “joy” at the outcome and 24% “pride.” Given the anti-Clinton nature of some Trump voters and the widespread expectations of a Clinton win, 51% conveyed “relief” and 37% expressed “surprise.” “I felt like I had a winning lottery ticket. Like a weight was lifted off my shoulders, named Hillary,” one woman in Columbus said. 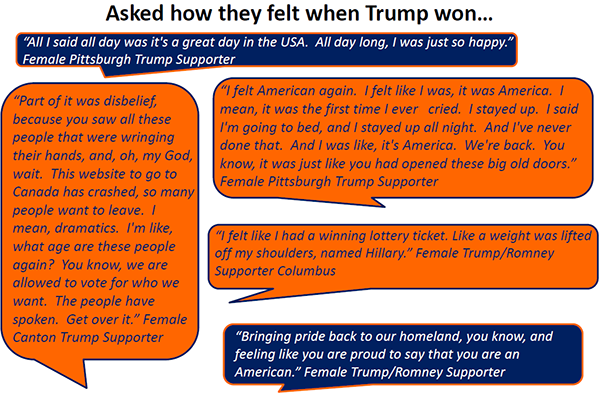 — Looking ahead to the 2018 midterm election, 78% of respondents said they planned to vote for the Republican candidate in their House district, 2% for the Democratic candidate, and 19% undecided. The undecided were most likely to identify as politically independent (53% of them) and ideologically moderate (37%).

— Respondents were deeply suspicious and distrusting of media. Nearly nine in 10 respondents (88%) said that media criticism of Trump reinforces that the president is on the right track, and the same percentage agreed with Trump’s assertion that the press is “the enemy of the American people.” 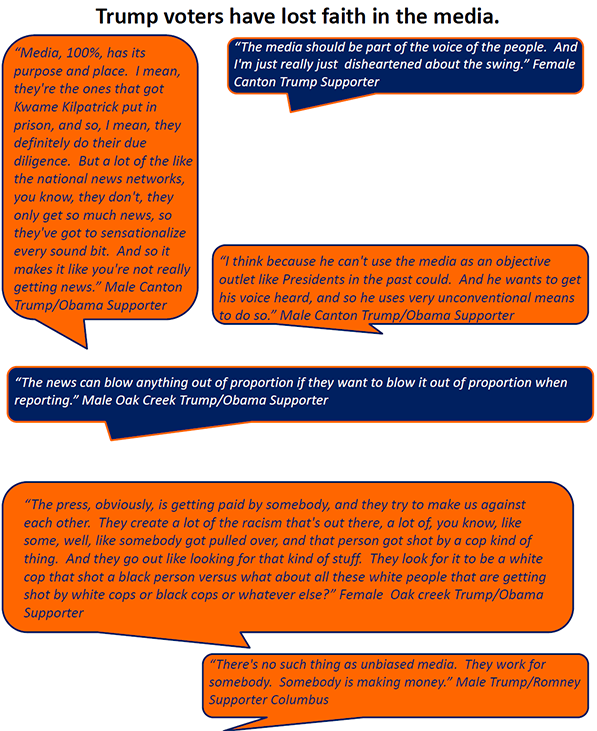 — Focus group participants were asked an open-ended question: “If Donald Trump were an animal, what kind of animal would he be, and why?” “Lion” was cited by Trump voters far more than any other animal — in one focus group of Proud Trump supporters in Pittsburgh, nine of 10 participants chose Lion.

The full report, including more details from the poll and extensive quotes from the focus groups, is available at: https://www.centerforpolitics.org/crystalball/wp-content/uploads/2017/04/Trump_voter_poll_summary.pdf. The full poll results are available at: https://www.centerforpolitics.org/crystalball/wp-content/uploads/2017/04/Trump_voter_poll.pdf and the crosstabs are available at: https://www.centerforpolitics.org/crystalball/wp-content/uploads/2017/04/Trump_voter_poll_crosstabs.pdf.

The Center for Politics decided to commission the poll and focus groups after the election as a way of checking in on Trump’s coalition early in his presidency.

The election results last fall were a surprise to almost everybody in the field of political analysis, ourselves most definitely included. So the Center realized that it needed to learn as much as possible about the phenomenon of the Trump voter, and share it with others. This study is part of our educational efforts.

The UVA Center for Politics worked with Glen Bolger and others at Public Opinion Strategies to conduct the poll and focus groups. The Center chose Public Opinion Strategies, a Republican firm, for two reasons: 1.) The Center has a long relationship with Bolger and respects his work and 2.) The poll and focus groups primarily studied Trump voters, a strongly Republican group, and thus it made sense to use a Republican firm. The last time the Center for Politics conducted a poll and focus groups was as a part of the Center’s Kennedy Half-Century project; for that study, the Center used Democratic pollsters Peter Hart and Geoff Garin in part because the study focused on a Democratic president.