— The “Cal 3” initiative is the latest in a long line of proposals to divide California into multiple states. This plan aims to carve up the Golden State into three new states.

— While the proposal has little chance of success, hypothetically the fragmentation of California would have notable political consequences for the Electoral College and the U.S. Senate. Splitting California into thirds would put about one-third of the state’s electoral votes in play for the GOP, while the additional Senate seats might benefit the Democrats.

How many Californias should there be? In 2013, venture capitalist Tim Draper proposed a measure to create six different states out of the nation’s most-populous state. After the “Six Californias” plan failed to make the ballot, Draper has returned with a new proposal. His latest cartographic contortion aims to break the Golden State into three not-so creatively named states: California, Northern California, and Southern California. Unlike Draper’s previous initiative, his “Cal 3” plan may have enough signatures to make the November ballot, offering Californians an opportunity to vote to fracture their state.

Four years ago, I wrote a fun what-if article for the Crystal Ball that examined Draper’s proposal to partition California into six different states and how it would hypothetically affect various aspects of the American political landscape, from the Electoral College to representation in the U.S. House. Just like his previous plan, Draper’s attempt to divide California into three states will almost certainly fail. Still, the Crystal Ball enjoys speculation as much as the next political junkie, so I decided to investigate how having three Californias would alter American politics.

Examining the political ramifications of the “Cal 3” proposal

The idea of dividing California into multiple states is not new. There have been various attempts to slice and dice the Golden State into new entities going back to the middle of the 19th century, around the time of California’s entry into the United States in 1850 as the 31st state. Map 1 presents Draper’s plan for three Californias. 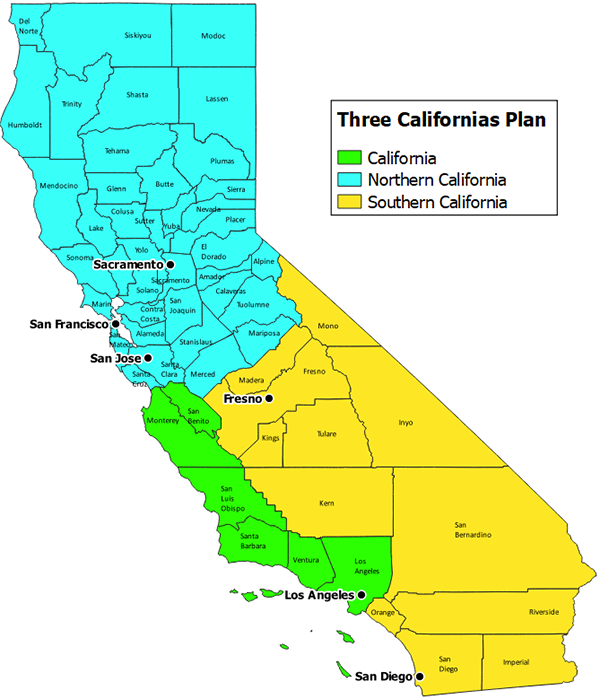 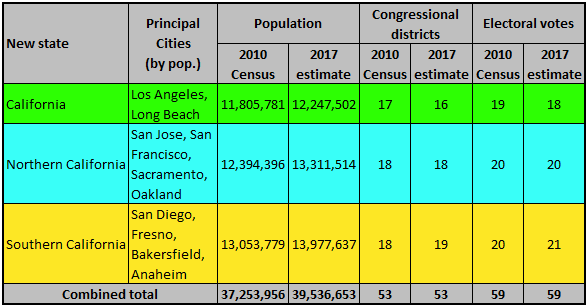 The new states would range from about 12 to 14 million people, according to the Census Bureau’s 2017 county-level population estimates. If the post-2010 redistricting process had occurred with three Californias instead of one, together the three still would have had 53 seats in the U.S. House of Representatives, with Northern and Southern California each receiving 18 seats and new California one fewer. This differs from the Six Californias plan in that a hypothetical 2010 reapportionment process with six new states would have reduced the ex-California seat total to 52 seats, with North Carolina picking up the extra seat. Fewer Californias would have allowed the three new states to avoid losing a seat during reapportionment. In terms of electoral votes, the three states would total 59 instead of 55, with a net increase of two states necessitating four new senators and four extra electoral votes. Northern and Southern California would become the fourth and fifth-largest states by population (2017 estimate) and would tie with Illinois and Pennsylvania for the fourth-most electoral votes (20, apportioning by the 2010 census). New California would have the eight-largest population and eighth-most electoral votes (19).

What about the political leanings of the new states? Table 2 shows the presidential voting data for 2016 and 2012. Based on the 2016 presidential election, all three states would have easily backed Hillary Clinton over Donald Trump. With a Clinton vote share of 64% or higher, new California and Northern California would have been the two most Democratic-leaning states in the country, surpassing Hawaii. Southern California would have been more competitive, but still would have voted for Clinton by about 10 percentage points.

Note: Because of rounding, margins may not appear to match the difference between the Democratic and Republican percentages.

The national impact of three Californias

The two most obvious ramifications of the Cal 3 plan would be the creation of a potentially competitive swing state (Southern California) in the Electoral College and the addition of four senators to the U.S. Senate. The former change would benefit Republicans, the latter Democrats to some degree.

For Democrats, is a potential but uncertain four-seat net gain in the Senate worth risking one-third of California’s electoral votes? Southern California would be competitive enough, at least initially, that a Republican would have a real chance of winning a midterm Senate election (with a Democrat in the White House) and at least some chance in a presidential cycle, even if the state remains more Democratic leaning than not (as in 2016). It is fair to say that the probability of Democrats holding both Southern California seats for a lengthy period would not be very high unless the state trended further to the left. So perhaps the best Democrats could consistently hope for would be a net gain of two seats from the additional Californias by holding a five-to-one seat advantage in the three states compared to the current share of two to zero. Presently, a gain of two net Senate seats would sound nice to Democrats and scary to the GOP. Republicans hold a narrow 51-49 edge in the Senate, so handing three more seats to the Democrats and one to the GOP would create a 52-52 tie.

On the one hand, additional Senate seats might help Democrats in the long run. Remember that Democrats hold 12 Senate seats in states that Trump carried in 2016, whereas Republicans hold just three seats in states that Clinton carried. Given that all 34 states with Senate contests in 2016 supported the same party for both president and Senate, there is a good chance that the 2020 and 2024 presidential cycles may have mostly straight-ticket outcomes, which would further diminish the number of crossover Senate seats held by the party that did not win a state in the presidential election. This may be especially true of the disproportionate number of Democrats in Trump-won states in Senate Class I (10), many of whom may not last beyond 2024 (if they get past 2018), the next presidential cycle for that class. Considering the average state has leaned 3.5 points more Republican than the nation as a whole in presidential elections from 1988 to 2016, the GOP has a built-in advantage in the equally apportioned Senate because more states tend to lean at least slightly toward the Republicans than the Democrats.

On the other hand, if the party coalitions continue to trend in the same direction as they did in 2016, Republicans may hold an outsized edge in the Electoral College because of the large concentration of white blue-collar voters in the competitive Midwest. So if Republicans can potentially take away some surefire electoral votes from the Democratic column by competing for one-third of California, that might advantage the GOP even more in presidential contests.

In light of the makeup of the Electoral College and the Republican lean in the 50 states mentioned above, the GOP might risk additional Democratic-held Senate seats in exchange for a shot at winning 20 electoral votes the Republicans currently have no chance of winning. Meanwhile, Democrats might be less willing to trade their certain electoral votes for more Senate seats because they may hope to make more gains in Sun Belt states in future presidential elections to offset their losses in the Midwest.

Of course, reviewing the potential political effects of the Cal 3 plan is a matter of complete speculation. Even if the initiative makes the November ballot in California, it is unlikely that Californians will vote to dismember their state. While I could not find any direct polling on the Cal 3 or the Six Californias measures, a late 2013 Field Poll asking about another proposal to create a new state out of rural parts of northern California and southern Oregon — to be called Jefferson — found that 59% of Californians disapproved of the idea while just 24% approved. If only a quarter of Californians supported the proposal to allow some rural northern counties to leave the state, it is difficult to see the more dramatic plan to carve the entire state into thirds gaining more support.

But let’s say the Cal 3 initiative somehow gained the approval of the voters. Article IV, Section 3 of the Constitution says that “no new State shall be formed or erected within the Jurisdiction of any other State; nor any State be formed by the Junction of two or more States, or Parts of States, without the Consent of the Legislatures of the States concerned as well as of the Congress.” Thus, the state legislature and the U.S. Congress would still have to approve the creation of the new states, as would the president by signing off on federal statehood legislation. If the voters supported the effort, the California legislature could potentially acquiesce. Additionally, it is possible that a successful initiative vote could be interpreted as equivalent to an act by the legislature, making state legislative action unnecessary, though the California Legislative Analyst’s Office points out that there is “no clear precedent for whether a voter initiative may provide the required state legislative consent to split a state.” Regardless, Congress and the president would still have to approve the deal, and while the GOP might gain from having three Californias in the Electoral College, other complications would exist, such as having four new senators and the need for new federal resources because the three states would no longer share everything. Politicians are naturally averse to making major changes, and creating three Californias would certainly be a political earthquake. Breaking up California into three states will require jumping through many hoops, and the first one — the voters — is likely to trip up the proposal.

1. Vote percentages come from Dave Leip’s Atlas of U.S. Presidential Elections. The modern two-party system of Democrats and Republicans began with the 1856 presidential election. In 1912, the California GOP nominated 13 electors pledged to Progressive Party (Bull Moose) nominee Theodore Roosevelt rather than incumbent Republican President William H. Taft. As the Republican-Progressive candidate in California, Roosevelt narrowly defeated Democrat Woodrow Wilson to win 11 of California’s 13 electoral votes (at the time, voters chose individual electors, and 11 of the 13 with the most votes were Republican-Progressive electors). Taft electors won a small number of votes as write-ins.