Republicans who hope that Donald Trump or Ted Cruz will not be their party’s presidential nominee might find some relief from The Four Faces of the Republican Party: The Fight for the 2016 Presidential Nomination, an excellent new book by Henry Olsen and Dante Scala. But if Trump and Cruz end up being the last candidates standing, Olsen and Scala’s analysis, and the analysis by others, suggests that Trump, not Cruz, could be the favorite for the nomination, even though neither candidate seems much like the kind of person who typically wins Republican nominations.

Olsen is a senior fellow at the conservative Ethics and Public Policy Center who also is a frequent contributor to National Review, while Scala is a political science professor at the University of New Hampshire. Their book is a longer, more in-depth version of an article Olsen wrote for National Interest with the same title in 2014. The Four Faces shows that the commonly-cited description of the GOP as having essentially two parts, insiders and outsiders, is incomplete. The party “does not divide neatly along establishment-versus-conservative lines,” the authors write. Olsen and Scala instead describe four parts of the GOP that divide along ideological and religious lines. These groups are the liberals/moderates, somewhat conservatives, very conservative evangelicals, and very conservative seculars. Table 1 describes these four groups:

Table 1: The Four Faces of the Republican Party 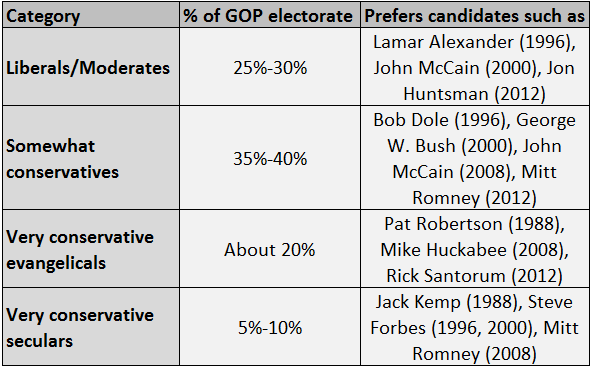 Source: The Four Faces of the Republican Party: The Fight for the 2016 Presidential Nomination

If there is a “silent majority” in the GOP — to borrow Richard Nixon’s term to describe the everyday Americans who supported him — it’s the “somewhat conservatives,” which represents a plurality of Republican voters and in recent elections has supported the person who wins the nomination. These voters “like even-keeled men with substantial governing experience. They like people who express conservative values on the economy or social issues, but who do not espouse radical change,” Olsen and Scala write.

That doesn’t sound much like a description of Cruz or Trump, right?

The one wing that has not produced a presidential nominee in recent election cycles is the very conservative seculars, who make up the smallest part of the GOP electorate. This group gets a lot of attention, though, because many conservative thought leaders are very conservative seculars. A good example of this kind of voter is not a person but a group: the Club for Growth, which often supports economically conservative primary challengers running against sitting Republican lawmakers. Some Tea Party voters who emphasize fiscal issues over social ones are also a part of this group. Even though “Washington D.C. elites are most familiar with” this group, their favorite candidates, like Jack Kemp and Pete DuPont in 1988 and Steve Forbes in 1996 and 2000, generally do not get very far because the other factions of the GOP have more voting power and tend to prefer candidates with less radical economic views.

Most of this cycle’s GOP candidates are fairly easy to categorize in one or two of these four groups. John Kasich has positioned himself closest to the center of any of the candidates in an attempt to perform well in New Hampshire, which has a high number of liberal/moderate Republicans. Jeb Bush and Chris Christie find themselves in the same boat as Kasich, and all three are also competing for primacy among the somewhat conservatives. Marco Rubio has a similar but somewhat different track: Olsen and Scala argue that Rubio’s “aggressive tax cut plan is meant to compete with the others for pre-eminence” amongst the very conservative secular group, but Rubio also hopes to capture a significant slice of the somewhat conservative bloc and cut off candidates that are easier to place in the moderate camp: Bush, Christie, and Kasich. These candidates are largely beating up on each other, as opposed to Cruz or Trump, which indicates that they believe they must advance from their part of the party before they focus on other candidates more ideologically and temperamentally dissimilar to them. 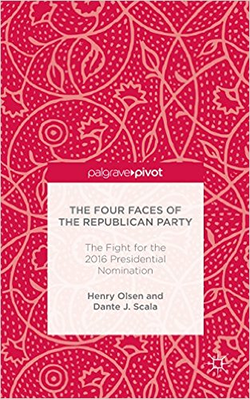 Cruz has emerged as the leading evangelical favorite over both Huckabee and Rick Santorum, two previous Iowa winners with credibility among religious conservatives, as well as the fading Ben Carson, who led in evangelical-dominated Iowa at times in the fall. Cruz has also made inroads with the secular conservatives, much to the chagrin of Rand Paul, whose libertarian economic policies fit well with this group. This might explain why Paul is going after Cruz, most recently with a bizarre “Audit the Ted” cartoon.

The one candidate who is hard to categorize is Trump, and his endurance in the race scrambles the Four Faces analysis. Trump generally does a little bit better with moderate and somewhat conservative voters, but his appeal is broad-based and seems based more on class than ideology. As Nate Cohn of the New York Times recently wrote, Trump’s supporters are “less affluent, less educated and less likely to turn out to vote” than the average Republican. Should Trump persevere and become one of two final candidates, “class rather than ideology would be the determining factor,” Olsen told me. The Republican battle might then more resemble recent Democratic battles than Republican ones, with a “wine track” candidate (maybe Cruz or another Republican?) versus a “beer track” candidate (Trump). As David Frum pointed out in The Atlantic, this upscale/downscale dynamic defined races such as Barack Obama (wine track) vs. Hillary Clinton (beer track) in 2008.  “Both parties — and especially the historically more cohesive Republicans — managed to keep sufficient class peace to preserve party unity,” Frum argued, but “not anymore, at least not for the Republicans.”

It may also be that Trump could outlast Cruz because he is both less economically conservative and less outwardly religious than Cruz, making him, oddly enough, seem more like past GOP nominees such as McCain and Romney, at least by comparison with the Texas senator.

Somewhat incredibly, there are signs that some establishment-oriented Republicans would prefer Trump to Cruz as the GOP nominee. Gov. Terry Branstad (R-IA) attacked Cruz over his opposition to federal support of ethanol and said he hoped Cruz would not win his state’s caucuses, which some took as a de facto endorsement of Trump. A pollster from the well-regarded Tarrance Group recently briefed Speaker of the House Paul Ryan and other House GOP leaders and argued that Cruz would hurt the party down the ballot more than Trump. Bob Dole, the party’s 1996 nominee, believes that as well. National Review editor Rich Lowry recently tweeted that the GOP establishment’s “mood on Trump moving from fear/loathing to resignation/rationalization,ie he’d run better than cruz & slam Hillary.” This is where Cruz’s failure to make any inroads with the GOP leadership could hurt his chances.

However, if GOP leaders want to stop both Cruz and Trump, they might be better off hoping for Cruz to win Iowa because he probably won’t also win New Hampshire. If Trump wins Iowa, “he’s on cruise control,” National Journal’s Josh Kraushaar observed, in part because Trump already leads in New Hampshire.

But the best reason to think that those who would prefer to see neither Trump nor Cruz nominated would have an easier time defeating Cruz than Trump is because it’s been done before: As The Four Faces shows, evangelical-oriented candidates without support from party leaders have had a very hard time winning the GOP nomination in recent years. There’s less historical precedent for Trump, which makes his chances harder to handicap.

This race’s story remains to be written, and there are other candidates, too: Someone of the Rubio-Christie-Bush-Kasich group will do well in moderate-leaning New Hampshire even if Trump finishes in first. That candidate may eventually create a winning coalition against Trump, Cruz, and the other candidates. One sharp Republican argued that it might be better for Trump to win both early states, if only because it might push Cruz to the wayside and catapult someone like Rubio into something of a one on one duel with Trump, a battle that Rubio could win in a long slog.

Because of Trump, it may be that this Four Faces analysis is more useful in future elections than it is now. Let’s say that Trump does have staying power, or is even nominated. It’s possible that his nomination will have long-lasting effects, particularly if he manages to win the general election, which is an unlikely but not impossible scenario. Or the Trump phenomenon could be a singular event based on a unique individual, and future Republican nomination contests will be dominated by more traditional candidates who fit more neatly into the Four Faces. Those contests might look like the 1996, 2000, 2008, and 2012 contests, which Olsen and Scala’s framework explain well. So even if Trump upsets the Four Faces description by drawing roughly even support from the party’s different wings this primary season, it doesn’t mean those wings would all of a sudden no longer exist.

Indeed, the book’s major achievement is to point out, conclusively, that the GOP is a lot more complicated than the commonly-cited insiders vs. outsiders dynamic indicates. That is an observation worth remembering long after the GOP figures out who its nominee is in 2016.