There they go again. The presidential campaign season is barely under way but already pundits and pollsters are making misleading claims about independent voters and the role they play in presidential elections. Here are some of the things you’ve probably read or heard in recent weeks:

These beliefs about the crucial role of independent voters in presidential elections have become the conventional wisdom among the Washington commentariat, reinforced by groups like “No Labels” and “Third Way” that try to promote centrist solutions to the nation’s problems. Recently, the Pew Research Center provided additional support for this theory with a report claiming that independents constitute a rapidly growing and diverse group of voters who swing dramatically back and forth from election to election.

It sounds convincing, but when it comes to media commentary about independent voters, you shouldn’t believe everything you read or hear.

Let’s start with the claim that independents make up the largest segment of the American electorate. That’s true only if you lump all independents together including those who don’t vote and those who lean toward a party. In 2008, according to the American National Election Study, independents made up 40% of eligible voters but only 33% of those who actually voted. Moreover, of that 33%, only 7% were true independents with no party preference. The other 26% were leaners.

Chart 1. Liberalism of party identifiers and leaners in 2008 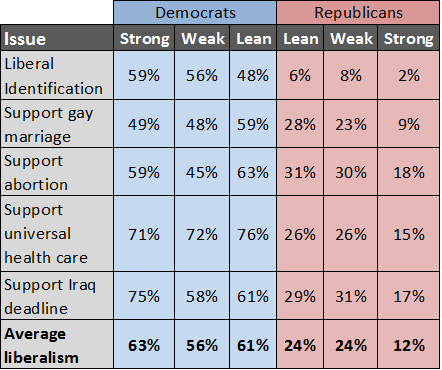 These results suggest that the high level of support given by independent leaners to their own party’s presidential candidate was not due simply to a short-term preference for that candidate over his opponent but instead reflected longer-term ideological and policy preferences. Based on this evidence, independent leaners are unlikely to be “up for grabs” in 2012. Regardless of who wins the Republican presidential nomination, we can expect the overwhelming majority of independent leaners, like the overwhelming majority of strong and weak identifiers, to remain loyal to their party because they strongly prefer their party’s policies to the opposing party’s policies.

Finally, no matter how independents vote in the 2012 presidential election, their preferences will not necessarily determine the winner. If the election is close, it is entirely possible that the candidate chosen by most independents will lose the overall popular vote.

Based on the national exit polls, that’s what happened in each of the last three presidential elections that were decided by a margin of less than five points.

In a close election, a candidate with an energized and unified party base can sometimes overcome a deficit among independent voters. That doesn’t mean the candidates should ignore independents, but it does mean that unifying and energizing their own party’s base is just as important as appealing to the independents.