In less than four months, millions of Americans will go to the polls to choose their next president along with all 435 members of the House of Representatives, 33 U.S. senators and thousands of state and local elected officials. The 2012 election will take place at a time of deep political division in the United States. Democrats and Republicans differ sharply over Barack Obama’s performance in office as well as over a wide range of issues from government spending and health care to immigration and gay marriage. These divisions are shaping the strategies of the candidates and the outlook for November. Because overwhelming majorities of Democrats and Republicans can be expected to support their own party’s nominee, the outcome will depend on which party does a better job of mobilizing its supporters and appealing to a small group of swing voters in a handful of battleground states.

I have modified my Time for Change forecasting model to take into account the impact of growing partisan polarization on the American electorate. The basic Time for Change model uses three factors — the incumbent president’s net approval rating at the end of June, the change in real GDP in the second quarter of the election year and a first-term incumbency advantage — to predict the winner of the national popular vote. Based on the results of the 16 presidential elections since World War II, the estimates for the basic model are as follows:

The basic model does an excellent job of predicting the outcomes of presidential elections. It has correctly predicted the winner of the popular vote in the last five presidential elections with an average error of about 2 percentage points. This is a margin of error that is close to that of the final pre-election Gallup Poll. In the last four elections, however, including the last two elections involving first term incumbent presidents, the basic model overestimated the winning candidate’s vote share. The model predicted that Bill Clinton would receive almost 57% of the major party vote in 1996, but he actually received less than 55%, and the model predicted that George W. Bush would receive just over 53% of the major party vote in 2004, but he actually received just over 51%.

The unexpected closeness of all four presidential elections since 1996 suggests that growing partisan polarization is resulting in a decreased advantage for candidates favored by election fundamentals, including first-term incumbents. This change is the product of a close division between party supporters within the electorate and a decrease in the willingness of voters to cross party lines to vote for any candidate from the opposing party, including an incumbent. As a result, election outcomes tend to reflect the underlying division between supporters of the two major parties, and right now that division is very close. In fact, the last four presidential elections have produced the closest victory margins and the smallest inter-election vote swings of any four consecutive elections in the past century.

In order to incorporate this polarization effect in the Time for Change Model, I added a new predictor (POLARIZATION) for elections since 1996.** The estimates for the revised model are as follows:

Adding the polarization correction to the basic model substantially improves its overall accuracy and explanatory power. All of the predictors have statistically significant effects after including the new polarization term, and the predictions for the four elections since 1996 are much more accurate. In fact, for both the 1996 and 2004 elections (which featured first-term incumbents), the revised model predicts the incumbent’s vote share within two-tenths of a percentage point.

The estimates for the revised model indicate that in the current era of partisan polarization, the advantage enjoyed by a first-term incumbent is less than half of what it was earlier — about 2.5 percentage points instead of 5.2 percentage points. This is not only a statistically significant difference; it is also a substantively significant difference. Specifically, it means that President Obama is likely to have a much tougher fight to win a second term.

Two of the three predictors used in the revised model are now set. President Obama’s net approval rating in the final Gallup Poll in June was +2 percentage points (48% approval vs. 46% disapproval). And Obama’s advantage as a first-term incumbent in the current era of polarization is 2.5 percentage points. The only predictor that remains to be determined is the change in real GDP during the second quarter of 2012 — the first estimate of that number will be released by the Bureau of Economic Analysis on July 27. 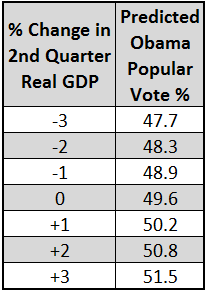 A growth rate of zero or less predicts a narrow popular vote win for Republican challenger Mitt Romney, while a growth rate of 1% or greater predicts a popular vote win for President Obama. The consensus prediction of economic forecasters for real GDP growth in the second quarter is currently about 2.0%. This growth rate would predict a narrow reelection win for President Obama with slightly less than 51% of the major party vote.

Growing partisan polarization has important implications for forecasting the outcome of the 2012 presidential election. With the American electorate both closely and deeply divided along party lines, we can expect another close election this year — probably closer than the 2008 election and possibly as close as the 2000 election.

Of course, the winner of the 2012 presidential election will actually be determined by the electoral vote. There is a very close relationship between the national popular vote and the electoral vote — the correlation between the two for the 16 elections since World War II is .97. The 2000 election is the only one since 1888 in which the winner of the popular vote did not also win the electoral vote. However, given the expected closeness of the popular vote in 2012, another Electoral College misfire has to be considered a possibility. In the end, the outcome could come down to one or two closely contested battleground states. And the next Florida might not be Florida — it might be Colorado, Ohio or Virginia.

Based on the results of the revised Time for Change forecasting model, there is only one prediction that seems very safe right now — it’s going to be a long election night.