A simple model based on two predictors — the racial composition of the Democratic primary electorate and a dummy variable for region — explain over 90% of the variance in Hillary Clinton’s vote share in this year’s Democratic primaries through March 8. The results of a regression analysis of Clinton’s vote share in 12 states for which exit poll data are available are presented in Table 1. I excluded Vermont from this analysis since Bernie Sanders clearly enjoyed a substantial advantage in his home state. 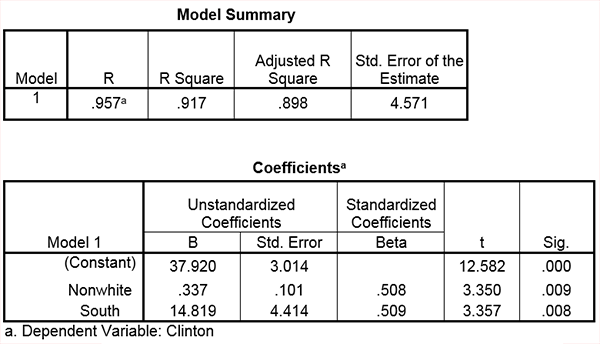 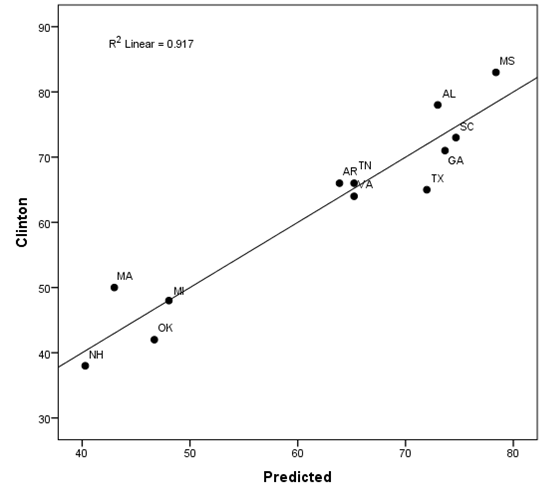 Figure 1 displays a scatterplot of the relationship between the predicted vote share for Clinton and her actual vote share in these 12 states. These results show that the predictions were highly accurate. Almost all of the points are very close to the regression line. It is especially interesting that the predicted result for the Michigan primary falls exactly on the regression line: Clinton’s predicted vote share was identical to her actual vote share of 48 percent. Thus the prediction model was far more accurate than pre-election polls, which had Clinton leading by an average margin of about 20 points.

Note: Predictions have an estimated standard error of plus or minus 5 percentage points, which are reflected in the ratings.

A note of caution and conclusions

These predictions assume that the effects of race and region on the outcomes of future Democratic primaries will be the same as their effects in the 12 states used in this analysis. That assumption may or may not turn out to be correct. In addition, the estimates of the nonwhite share of the electorate clearly are subject to error. On average, the nonwhite share of the Democratic electorate increased by about six percentage points between 2008 and 2016 in the 12 states used in this analysis. However the change ranged from -1 point in Virginia to +24 points in Mississippi.

Leaving these important caveats aside, our results suggest that Bernie Sanders is likely to present a strong challenge to Hillary Clinton in the remaining Democratic primaries. Clinton has had a big advantage in the nomination race thus far because so many of the contests have been in the South. After next Tuesday, however, there will be no more primaries in the South. Based on the results presented here, she will be favored over Sanders only in non-southern states in which the nonwhite share of the Democratic primary electorate is at least 40 percent. The key question may be whether the huge delegate lead she has built up by winning southern primaries by landslide margins will be enough to sustain her through the rest of the primary season.