Some analysts have been making the case that 2012 is going to turn decisively one way or the other — perhaps evolving into a 2008-style margin for Democrats or Republicans.

Maybe they are right, but every objective piece of evidence so far suggests that this election will be quite close and highly competitive for the presidency, Senate and, to perhaps a lesser extent, House.

It’s not 2008 anymore. There are contradictory trade winds blowing hard, some lifting President Obama, and others Mitt Romney.

Enthusiasm seems restrained for both men in critical parts of the electorate. For Obama, what was a crusade four years ago is a mere campaign today. Governing realities and a stubbornly slow economic recovery have tempered the heady expectations that powered Obama to a decisive win. “Hope and change” has become a rote movement “Forward” without an obvious destination.

For Romney, few are under any illusions that he has a magic elixir to solve the protracted problems the nation faces. Given his breathtaking ideological evolution over the years, many in his own party base are unsure what he will actually do on many issues, should he be elected.

Perhaps we’re heading toward another 2000 or 2004-style election: A close, gritty affair where neither side will score a towering victory. In other words, while it’s easy now to see either the Democrats or Republicans doing well in November, it’s hard to see either doing great, at least right now.

Shifts in the Senate

Sen. Richard Lugar’s (R-IN) landslide defeat on Tuesday night adds yet another wrinkle to this year’s battle for the U.S. Senate. Lugar would have been a shoo-in for reelection, but now Democrats have at least a modest chance to grab the seat. Rep. Joe Donnelly, the Democratic nominee, has to be ecstatic. We still believe that Richard Mourdock, the Republican state treasurer who defeated Lugar on Tuesday, is the favorite to win this seat, but we are changing the rating from “likely Republican” to LEANS REPUBLICAN. Lugar ran a miserable campaign and was dogged by questions about his residency — it appeared that he hadn’t lived in the Hoosier State since the 1970s. Lugar’s loss is a lesson that politics, like all other sports, requires practice, and after finding himself in a real race for the first time in decades, Lugar was out of shape. It cost him. Hoosier Republicans wanted a more conservative senator, too — and they might get him.

Meanwhile, it is tempting to give the same rating to the Republican incumbent commonly thought to be most vulnerable in this cycle: Sen. Scott Brown of Massachusetts. That’s because Brown is a steady, cagey campaigner, and his opponent — liberal favorite and consumer protection advocate Elizabeth Warren — has had a terrible couple of weeks. After stories emerged about her being listed as a minority at Harvard (she is reportedly 1/32nd Native American), Warren made a clumsy gaffe:  “I still have a picture on my mantel and it is a picture my mother had before that — a picture of my grandfather. And my Aunt Bea has walked by that picture at least a 1,000 times remarked that he — her father, my Papaw — had high cheekbones like all of the Indians do.” If the 2012 election has a “Macaca” moment — referring to the infamous incident from ex-Sen. George Allen’s (R-VA) 2006 reelection campaign — this could very well be it.

That said, we are keeping this race a toss-up for now.

The problem for Brown is that he’s going to have to overcome a Democratic wave in November of presumably epic proportions. In 2008 Obama defeated John McCain in Massachusetts by about 62% to 36% — or a margin of 795,000 votes. Even though Massachusetts native Mitt Romney is the Republican nominee, Obama will still win comfortably. Let’s say that Obama wins by only 700,000 votes. That still means that Brown would need more than 350,000 of those voters to split their ballots for him in order to turn the tide. Assuming turnout is about the same — 3.1 million ballots cast in 2008 — he’ll need at least 11% of voters to split their tickets in his favor. That’s a lot in a partisan era, even against an imperfect candidate. However, Warren needs to get her act together.

In the wake of Warren’s gaffe, a new Rasmussen poll showed the two candidates tied at 45% apiece, not a bad result for Warren under the circumstances.

Speaking of faltering candidacies, Rep. Connie Mack (R) has been floundering in his challenge to Florida Sen. Bill Nelson (D). Mack has struggled with basic inquiries from reporters, and he faces the same questions about residency — his wife, Rep. Mary Bono Mack, lives in California — that helped sink Lugar. Mack reminds us a bit of Texas Gov. Rick Perry in the presidential contest, and we’re not being complimentary. Like Perry, who entered the White House race late and had trouble articulating why exactly he was running, Mack seemed to jump into the Florida Senate contest only when it became apparent that the existing GOP field was not very good.

However, it is not clear how that GOP field — which also includes ex-Sen. George LeMieux — will shake out. And perhaps a big Romney wave in Florida will lift Mack, too.

If the election were today, we’d probably pick Scott Brown in Massachusetts and Bill Nelson in Florida. But it isn’t, and we’re going to wait a bit longer before we move those races out of the toss-up column.

There is one toss-up we’re now comfortable moving: We now favor the Democrats in New Mexico’s Senate race. The reason has little to do with the two likely big party nominees: Rep. Martin Heinrich (D) and ex-Rep. Heather Wilson (R). It does have to do with the fact that New Mexico looks to be squarely in Barack Obama’s camp in November, and we don’t see a huge crossover vote boosting the Republican Wilson. Obviously, if Romney opens up a lead in the presidential race, and if New Mexico becomes competitive, we’ll have to revisit this rating. But, for now, this race LEANS DEMOCRATIC.

Finally, and though he had a tougher-than-expected run in 2010, Sen. Joe Manchin (D-WV) is looking strong, in part because his opponent is the lackluster businessman and perennial candidate John Raese, whom Manchin defeated in 2010. We’re moving this race to SAFE DEMOCRATIC, despite West Virginia’s Republican lean at the presidential level. Note that Manchin has declined to endorse his party’s president, Barack Obama, and he did not indicate if he, like so many other West Virginia Democrats, preferred prison inmate Keith Judd to the sitting president.

The Senate calculus is now this: If all members not up for reelection return to the Senate next January, and all the seats where we favor one party go that way in November, the Senate is 47-46 Democratic, with seven toss-ups.

Republicans remain strongly favored to keep the House, but it looks like Democrats will be able to pick up at least some seats to cut into the GOP’s 242-190 edge (with three Democratic vacancies). That said, Republicans are not without opportunities. 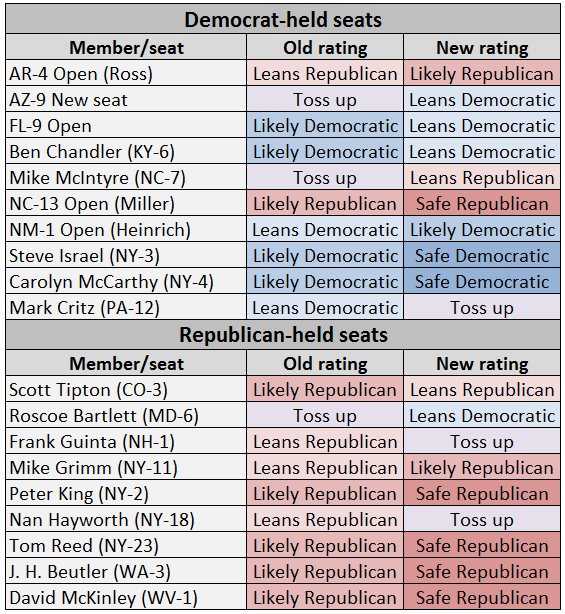 On Tuesday, the National Republican Congressional Committee had a good night. In two competitive races, the GOP establishment’s preferred candidate won: first, freshman Rep. Larry Bucshon (R-IN) held off a challenge from activist Kristi Risk; and second, state Sen. David Rouzer (R) won the right to challenge vulnerable Rep. Mike McIntyre by dispatching 2010 McIntyre challenger Ilario Pantano. A Pantano candidacy would have kept this district a toss-up; with Rouzer’s win, we now give him a slight edge. Also, retiring Rep. Brad Miller’s seat appears almost certain to go to former U.S. Attorney George Holding (R); the winner of the Democratic primary for that seat announced before the primary that he would not be a candidate in the fall, forcing Democrats to find a new contender. At this point, Republicans are favored to win four Democratic-held seats in the Tar Heel State, but Democrats could possibly limit these losses to a couple.

Rep. Mark Critz (D-PA), who won a tough member-versus-member primary against Rep. Jason Altmire, will face Keith Rothfus, who almost beat Altmire in 2010 in this re-shaped Western Pennsylvania district. We previously rated this race as leans Democratic with the thought that Altmire would win the primary, because under the new Republican-drawn Keystone State House map, the district was actually a touch bluer than Altmire’s current district. However, because Critz won, this district could go either way — Critz’s current territory is several points bluer than the new PA-12, where he now must run.

Rep. Roscoe Bartlett (R-MD), the eccentric octogenarian, is now an underdog against wealthy Democratic businessman John Delaney, who since our last update won a smashing primary upset and is well positioned to capitalize on a Democratic gerrymander and retire Bartlett.

At this point, we rate 234 House seats as safe, likely or leaning Republican and 188 as safe, likely or leaning Democratic. That leaves 13 toss-ups — if the Democrats can sweep those (hardly a given), they would have an eight-seat gain. But it will take cutting into seats where we currently favor Republicans — and holding some currently Democratic-held seats we believe at this point will flip — to really threaten John Boehner’s speakership.

With the election now less than six months away, we will be making more frequent updates to our House ratings. To see our full House ratings, click here; and our Senate ratings are available here.

A good early bet is for the margins of control to narrow in both houses of Congress. Republicans should win the House of Representatives again, but Democrats will pick up some seats, maybe cutting the GOP majority of 25 by a third or (only if Obama wins handily) by as much as half. The Senate appears likely to be very narrowly divided, with Democrats holding on by a seat or, more likely, Republicans gaining technical control by a seat or two. It might even come down to a tie-breaking vote by the newly elected vice president or the eventual party-choice decision of Maine’s Angus King, the Independent frontrunner for Republican Olympia Snowe’s Senate seat. We believe he’ll ultimately caucus with the Democrats, but there’s a lot that can happen between now and next January that might change that calculus.