As we discussed last week, the Democratic Party’s presidential field in 2016 hinges greatly on the decision of one person: Hillary Clinton. The Republican Party’s early primary picture is much more complicated, and the top-tier contenders are grouped much closer together at the starting gate.

To us, though, there is one name that stands out just a little bit more than the rest, even though he isn’t currently as public because he’s not appearing on seven Sunday TV chat shows almost simultaneously or running a landslide 2013 reelection race in his state. That person is Wisconsin Gov. Scott Walker.

Walker’s rise reminds us of the wisdom of Obi-Wan Kenobi telling Darth Vader in the original Star Wars that, “If you strike me down, I shall become more powerful than you could possibly imagine.” In Walker’s case, Democrats tried — and failed — to strike him down in a recall election last year. The recall was precipitated by the actions of Walker and his Republican allies in the Badger State legislature to weaken public sector unions. Not only did Walker survive, but this unscheduled political war elevated him to stardom amongst conservatives across the country. If Walker were to become the Republican presidential nominee, Democrats will have helped it happen.

The former Milwaukee County executive saw one of his potential liabilities disappear last month when a long “John Doe” investigation into some criminal activities in his county office concluded. While some aides close to Walker were convicted, he was not accused of any wrongdoing. Granted, the investigation will get a full airing in the national press if Walker runs, but it appears as though he has escaped without real damage and his road to reelection in 2014 looks fairly clear at the moment. For more on Walker, we suggest this excellent, recent summation of his national ambitions from Jason Stein of the Milwaukee Journal Sentinel.

Of course, it is possible that Walker is the second coming of Tim Pawlenty, the former Minnesota governor and 2012 washout who was always more fascinating to the chattering classes than the voters. Yet Walker is already better known among national conservative activists, and he has both the combat medals awarded by the conservative elite and substantial right-leaning policy achievements as well.

Republicans might want to consider a Midwestern candidate in 2016 because if current demographic trends continue, the Midwest could be the must-win area for Republican presidential candidates. It’s whiter than the nation as a whole. This matters because Republicans may not be able to do much better than their current 20% of the votes of non-white voters (all racial groups combined), and non-whites will probably make up about 30% of the presidential electorate next time. Therefore, the GOP nominee will need to squeeze even more votes out of the nation’s white presidential electorate, which will make up the other 70% or so of 2016’s voters. (Keep in mind that Romney won whites with a landslide 59% on his way to a losing 47% of the total vote.)

Chart 1 shows the 12 states in the 2012 election where the winning candidate received 53% or less of the vote — in other words, the dozen most competitive states. Five of the 12 are in or near the Midwest and are much whiter than the nation as a whole. Their electorates were on average 85% white in 2012, versus 72% for the entire nation, according to national and state exit polls. 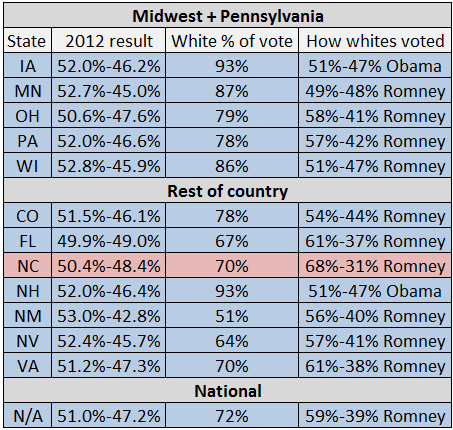 Notes: States shaded in blue were won by President Obama in 2012; the state shaded in red was won by Mitt Romney.

If Mitt Romney had won these five states — Iowa, Minnesota, Ohio, Pennsylvania and Wisconsin — he would have been president, with exactly 270 electoral votes.

Would Walker have some special appeal in these states and, more generally, would he be a strong national candidate? That’s impossible to say at this early point. In fact, it’s an open question as to whether Walker could even deliver his home state of Wisconsin, given that it has gone Democratic in seven straight presidential elections. But it is possible, perhaps likely, that a winning Republican presidential candidate won’t be able to recreate George W. Bush’s winning map from 2004, which included the entirety of the Inner West (including Colorado, Nevada and New Mexico) as well as major states like Florida and Virginia, which with the exception of the Centennial State all have electorates more diverse than the nation as a whole. Rather, a GOP victory might well be won by means of the whiter Midwestern swing states moving to the Republicans, while the more racially diverse states, like previously Republican-dominated Florida and Virginia, vote Democratic for a third straight time.

Our initial listing of 2016 Republican presidential possibilities features Walker, Gov. Chris Christie (NJ) and Sen. Marco Rubio (FL) in the first tier. While Christie and Rubio have plenty of pluses to tout, they also have some problems to overcome with the party base in primaries. Christie could be perceived as too moderate on a wide range of social and environmental issues. Moreover, Obama-haters will remember, with intense scorn, the kind words Christie said about the president during Superstorm Sandy. Some Republicans still insist that Christie’s embrace, combined with the campaign’s shutdown for the better part of the last week, lifted up President Obama at a crucial moment. Finally, after Mitt Romney’s nomination and defeat, will the party really want to go with another Northeasterner?

Rubio, meanwhile, will have several years of casting hard votes in the Senate. Additionally, if there is a major immigration deal, Rubio will be a major player in it — and he has already taken positions on the topic that do not sit well with many anti-illegal immigration activists. Recall that Texas Gov. Rick Perry’s 2012 campaign sputtered in part because he called critics of the Texas DREAM Act heartless. Perry was leading national GOP primary polls on the day he blurted out that comment in a debate (Sept. 22, 2011). By the time he made his famous “Oops” gaffe a month and a half later (Nov. 9), Perry had dropped to fourth in national polls and was becoming an afterthought. While Perry’s campaign was flawed in other ways, his immigration adjective hurt him among Republican primary voters. What will Rubio’s position — and record — be on the divisive subject come debate season in 2015? One other problem for Rubio is that his Senate seat is up in 2016, and — unlike Rep. Paul Ryan in Wisconsin in 2012 or Vice President Joe Biden in Delaware in 2008 — it appears that he cannot be a candidate for reelection in Florida while also appearing on a national presidential ticket. (However, he could file for reelection to the Senate and then withdraw his candidacy if nominated for president or vice president.)

Sen. Rand Paul (KY) and Gov. Bobby Jindal (LA), our second tier, are two candidates who definitely would make waves if they entered the field (and both seem inclined to). But we suspect that Paul’s appeal is too narrow even within his own party, and his foreign policy positions, though less dovish than his father Ron’s, are not (yet?) widely accepted in the Republican mainstream. Jindal, meanwhile, is having trouble back home, and his speaking skills are widely panned.

We realize that putting Rick Santorum on this list will elicit some snickers, but let’s remember that Republicans often give their presidential nomination to the person seen as “next in line.” That list includes Ronald Reagan in 1980 (after losing to Gerald Ford four years earlier); George H.W. Bush in 1988 (after losing to Reagan in 1980); Bob Dole in 1996 (after losing to Bush in 1988); John McCain in 2008 (after losing to George W. Bush in 2000); and Mitt Romney last year (after losing to McCain). Santorum would have more credibility and potentially more fundraising power moving into 2016 than he did going into 2012. His social conservatism is a magnet for white evangelical Christians, who dominate early caucuses and primaries in places like Iowa and South Carolina. (They are just as crucial in a general election, with more than two of every five Romney voters in the 2012 general election being white evangelicals.)  The social conservative wing of the GOP is one reason why Rick Perry — 2012’s Mr. Crash ‘n’ Burn — also merits inclusion here. Of course, Perry will be finished if he decides to run for a fourth full term as Texas governor next year and loses in the Republican primary.

Ryan would be higher on our list if we thought he was more serious about running; Politico’s Jonathan Martin recently wrote about his national “disappearing act.” We think Ryan prefers being in the House, but if he resolves to grab the brass ring then he’ll start with earned national prominence. Ryan would contest with Santorum for the label of “next in line.” That said, Ryan’s 2012 vice presidential run was largely inconsequential in the outcome, which is not a mark in his favor.

Lurking in the weeds as our wild card is Gov. John Kasich of Ohio. After a rocky start to his governorship — voters overturned a set of public sector union restrictions he and the Republican-run legislature passed in 2011 — Kasich has seen his approval steadily rise and appears to be at least a small favorite to win reelection next year. Provided he wins a second term, there’s speculation in the Buckeye State that he might try to run for president, given that many believe he covets the nation’s top job, which he briefly pursued in 1999 while he was a congressman. Joe Vardon of The Columbus Dispatch noted Kasich’s presidential ambitions shortly after the 2012 election: “Aides and people close to him now also indicate his thoughts are on 2014, although they don’t back away from the possibility when the topic of 2016 comes up.” One potential problem for Kasich is his support for Medicaid expansion, which has riled the Republicans who dominate the Ohio legislature. While an expansion might frustrate conservatives, it would certainly please every hospital executive in the state of Ohio; that may not be a great tradeoff for someone who might run in a Republican presidential primary, but there are political benefits — even for conservatives — in expanding Medicaid. One thing’s for sure — no Republican is going to win the White House in 2016 without Ohio.

Some might wonder why we have not included former Florida Gov. Jeb Bush. Our sense is that he doesn’t seem keen to run. His own son, George P. Bush (now a candidate for land commissioner in Texas), told us last November that his father likes being “a voice of reason within the Republican Party” and that “we’ll see where the future takes him, but I think he enjoys his role. He loves business and helping out behind the scenes, maybe being Marco’s [Rubio] senior adviser.” We interpreted that to mean son didn’t think father would run, but you can draw your own conclusions by watching the full question and answer here. Inescapable is the fact that Jeb Bush’s surname carries a lot of baggage. Still, he would be a serious player in any contest. So too might be a number of other Republican governors and federal officeholders who could catch presidential fever in the coming months. It is not inconceivable that a star could be born in the 2014 midterms, with enough momentum to overcome the early organizing by our 2013 list. Barack Obama’s short tenure in the Senate prior to 2008 has removed any bar to quick promotion in either party, if the conditions are right.

It is so early that our list may be outdated by this time next year, much less in the snows of Iowa come 2016. Just suppose Hillary Clinton doesn’t run, as unlikely as that appears today. Wouldn’t one expect the Republican list of contenders to grow, along with the Democratic gaggle? A wide-open contest for president attracts all the super-ambitious pols, and that’s one Washington category where there has never been a deficit.