Do “missing white voters” offer hope for the Republican Party in future presidential elections? Sean Trende, a popular elections analyst for RealClearPolitics.com, thinks so. According to Trende, a large number of white voters dropped out of the electorate in 2012 because they weren’t enthusiastic about Mitt Romney’s candidacy. Trende has argued that getting these missing voters back to the polls could allow the GOP to overcome any advantage Democrats may gain from the growing nonwhite share of the electorate in the 2016 presidential election and beyond.

The ANES is the longest-running and most widely respected academic survey of the American electorate. It has been conducted in every presidential election year and most midterm election years since 1948. The 2012 survey is notable for its addition of an Internet-based component and for its very large sample size. Almost 5,500 eligible voters were surveyed before and after the election, and the overall results matched the outcome of the presidential election reasonably closely, with Barack Obama winning 52% of the vote to 45% for Mitt Romney.* (In the actual election, Obama won 51% to Romney’s 47%).

The outcome of any election depends on the size and candidate preferences of the three groups mentioned above — returning voters, dropouts and new voters. It is therefore important to consider the contribution of new voters as well as that of dropouts to changes in the composition of the electorate and election results over time. Table 1 displays the racial composition of these three groups in 2012 based on data from the ANES survey.**

The most important feature of Table 1 in relation to the debate over “missing voters” is that the dropouts were significantly less white than the returning voters. This is consistent with our earlier critique of Trende’s “missing white voters” theory. The reason that the white share of the electorate decreased in 2012 was not that whites made up a disproportionate share of dropouts (even the census data, which are most favorable to Trende’s case, indicate that less than a fifth of the white share decrease can be accounted for by disproportionate white dropouts; the exit polls and the ANES data presented here indicate far less). The white share of the electorate decreased because the new voters included an even larger proportion of nonwhites than the dropouts and a substantially larger proportion of nonwhites than the returning voters.

Of course, the impact of dropouts and new voters on the outcome of an election ultimately depends on the candidate preferences of these two groups compared with the candidate preferences of returning voters. Here, the results from the 2012 ANES are even more damaging to the “missing white voters” theory, as the data displayed in Table 2 show. The data in this table show that, based on their pre-election candidate preferences, dropouts favored Barack Obama over Mitt Romney by a somewhat larger margin than returning voters.^ In other words, the “missing voters” in 2012 were more Democratic than the returning voters. However, new voters favored Obama by a considerably larger margin than either of these groups. So the net impact of turnover in the electorate was to produce a 2012 electorate that was more inclined to vote for Obama than the 2008 electorate. 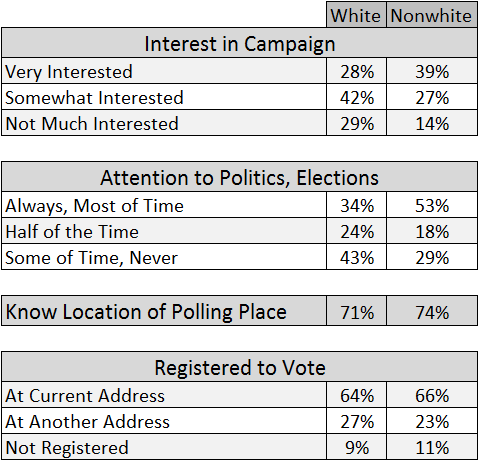 A misleading focus on “missing voters”

Beyond the fact that the 2012 dropouts do not look like a group that Republicans can count on for help in future elections, a focus on “missing voters” completely ignores what is almost certain to remain the most important source of change in the racial composition and political orientations of the American electorate for the foreseeable future — generational replacement. To demonstrate the potential impact of generational replacement on the electorate, Table 4 compares the racial composition, party identification and presidential candidate preference of different age groups in the 2012 ANES survey based on respondents who reported voting in either 2012 or 2008. So the 2012 dropouts are included in this table.

The age-group differences in race, party identification and presidential candidate preference in Table 4 are stunning and underscore the direct threat posed by generational replacement to the future viability of the Republican Party. The youngest age group in the electorate was the most racially diverse, the most Democratic and the most likely to prefer Barack Obama to Mitt Romney. In contrast, the oldest age group in the electorate was the least racially diverse, the most Republican and the most likely to prefer Mitt Romney to Barack Obama. Moreover, based on the known racial characteristics of those who will be entering the electorate over the next several decades, it is almost certain that this trend will continue.

While we cannot predict with certainty exactly what the racial composition of the electorate will be in any given election, we can predict with a high degree of confidence that the nonwhite share of the electorate will continue to grow for many years to come. Given the near inevitability of this demographic trend, a political party that depends almost entirely on the support of white voters will face a more and more difficult task in assembling a winning electoral coalition. Focusing on “missing white voters” ignores this fundamental and irreversible trend.

*Detailed information on the 2012 ANES including sampling procedures, questionnaire design and question wording can be found at www.electionstudies.org.

^^The large proportions of white and nonwhite dropouts who reported being registered at another address suggests that one of the major reasons for voters dropping out of the electorate between elections is geographic mobility and the necessity of re-registering at a new address after moving.

Alan I. Abramowitz and Ruy Teixeira